Meaning of The 7 of Hearts 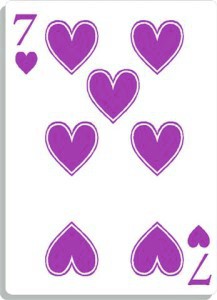 Upright: She represents a sincere, devoted, loving friend, quiet happiness, a loving marriage. She suggests: for a young woman, a marriage with the man she desires, for a man, her honesty and sincerity, he will have a marriage according to her desires. This card softens the bad influences of the cards with which she is standing.

Reversed: It suggests that sentimental misfortunes will come from awkwardness, that detachment from the loved one will cause pain and suffering. It represents melancholy, boredom, sadness, hopeless and burdensome loneliness.

THE ACE OF CLUBS:
Financial success.

THE KING OF CLUBS:
Success due to moral qualities and righteousness.

THE LADY OF CLUBS:
Protection.

THE JACK OF CLUBS:
Good party.

THE TEN OF CLUBS:
Financial comfort promised and assured.

THE EIGHT OF CLUBS:
Selfless and sincere love.

THE SEVEN OF CLUBS:
Happiness calm and serene.

THE ACE OF HEARTS:
Platonic declaration of love.

THE KING OF HEARTS:
A sincere and caring friend will help.

THE LADY OF HEARTS:
Honest plans of a friend.

THE JACK OF HEARTS:
Platonic love of a young man with blond or light brown hair.


THE TEN OF HEARTS:
Success due to honesty.

THE EIGHT OF HEARTS:
A young woman with blonde or light brown hair thinks of the consultant.

THE ACE OF DIAMONDS:
Proposal, letter to ask for a bride's hand in marriage.

THE LADY OF DIAMONDS:
No further steps towards a marriage.

THE TEN OF DIAMONDS:
Happy steps towards a marriage.

THE SEVEN OF DIAMONDS:
Little gift.

ACE OF SPADES:
Surprise that will be pleasant.

THE JACK OF SPADES:
Lies.

THE TEN OF SPADES:
Sentimental satisfaction.

THE NINE OF SPADES:
Death of a loved one.

THE EIGHT OF SPADES:
Illness of a loved one.

THE SEVEN OF SPADES:
Heartbreak.

add a comment of Meaning of The 7 of Hearts