Who I am
Lluís Enric Mayans
@lluísenricmayans 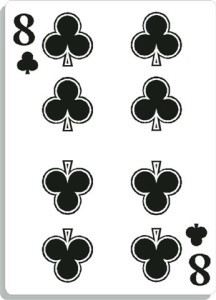 Upright: This card shows a young brown girl. It suggests a success in love, a great joy. It also announces gains in business, a promotion, an advancement due to the consultant's talent alone.

Reversed: Money problems, difficulties in the steps, the displacements. Disappointment in love or ephemeral affair.

THE ACE OF CLUBS:
Great success in the love life.

THE KING OF CLUBS:
The consultant will be introduced to a brunette who will have a sound financial situation.

THE QUEEN OF CLUBS:
The consultant will get to know a person who will become very intimate.

THE JACK OF CLUBS:
Love intrigue.

THE TEN OF CLUBS:
Money earned through gambling.

THE NINE OF CLUBS:
A very great joy will soon come to the consultant.

THE SEVEN OF CLUBS:
An unknown person is going to do the consultant a favour.

THE ACE OF HEARTS:
News from a friend or a woman.

THE KING OF HEARTS:
Wedding plans.

THE QUEEN AT HEART:
The consultant is loved by a blonde woman.

THE JACK OF HEARTS:
Engagement.

THE TEN OF HEARTS:
Sentimental success, in love with the consultant.

THE NINE OF HEARTS:
Small amount of money.

THE EIGHT OF HEARTS:
A young blonde girl is thinking about the consultant.

THE SEVEN OF HEARTS:
The consultant is concerned about financial matters.

ACE OF DIAMONDS:
Sending a small amount of money by mail or bank transfer.

THE KING OF DIAMONDS:
Burglary or loss of property.

THE QUEEN OF DIAMONDS:
The consultant's good faith will be tested.

THE JACK OF DIAMONDS:
Letter, news.

THE TEN OF DIAMONDS:
The consultant will make a trip that will benefit him.

THE EIGHT OF DIAMONDS:
Pleasant ride.

SEVEN OF DIAMONDS:
Small gift that will please.

ACE OF SPADES:
Succeeded in matters of love and romance.

THE KING OF SPADES:
Trial won.

THE QUEEN OF SPADES:
Medication without consequences.

THE JACK OF SPADES:
Bad plans discovered and thwarted.

THE NINE OF SPADES:
Dangerous liaison that will bring big problems.

THE EIGHT OF SPADES:
Unhappy love.

THE SEVEN OF SPADES:
Disappointment

add a comment from Meaning of The 8 of Clubs

97%
We have been able to provide in 97% of times, the solutions that users were looking for when consulting our page.