Meaning of The 9 of Diamonds

The nine of Diamonds. 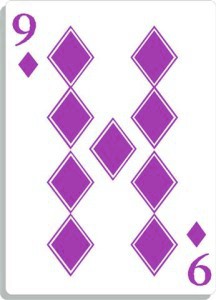 Right: This map represents delays, setbacks, annoyances of all kinds. It will be necessary to be vigilant otherwise beware of problems and difficulties.

ACE OF CLUBS:
Money problems despite delays will be overcome.

THE KING OF CLUBS:
Problems with a man with a good profession and a good situation.

THE JACK OF CLUBS:
A financial case will be handed over, delays.

THE TEN OF CLUBS:
Significant financial or money loss.

THE NINE OF CLUBS:
The consultant will miss out on something that would have been very beneficial to him.

THE SEVEN OF CLUBS:
Small loss of money with no consequences.

THE ACE OF HEARTS:
Letter, sentimental mail that will be late.

THE KING OF HEARTS:
Delay in a union that may even be in the worst case, removed.

THE LADY OF HEARTS:
Slander and slander will cause problems for the consultant and shatter his hopes.

THE JACK OF HEARTS:
Jealousy of short duration.

THE TEN OF HEARTS:
Failure in business.


THE NINE OF HEARTS:
Sentimental breakup.

THE EIGHT OF HEARTS:
Missed or cancelled appointments.

THE SEVEN OF HEARTS:
Difficulties or delays, setbacks.

THE ACE OF DIAMONDS:
Bad news.

THE KING OF DIAMONDS:
One person will quarrel with the consultant.


THE QUEEN OF DIAMONDS:
Failure.

THE JACK OF DIAMONDS:
Bad news coming in the mail.

THE TEN OF DIAMONDS:
Missed or cancelled trip.

THE EIGHT OF DIAMONDS:
Failure in the consultant's companies.

THE SEVEN OF DIAMONDS:
Bad joke.

THE KING OF SPADES:
Someone's trying to harm the consultant.

THE LADY OF SPADES:
An evil woman won't be able to do any harm.

THE JACK OF SPADES:
The consultant will be dragged into a case that will be bad.

THE TEN OF SPADES:
Threat of imprisonment or bankruptcy.

THE NINE OF SPADES:
Failure that will be painful and cause annoyance.

add a comment from Meaning of The 9 of Diamonds

96%
We have been able to provide in 96% of times, the solutions that users were looking for when consulting our page.