Meaning of The Ace of Clubs

Who I am
Lluís Enric Mayans
@lluísenricmayans

The Ace of Clubs 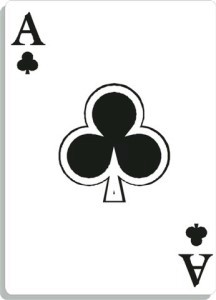 Upright: It represents success in business, luck. Excellent for all things money: sign of fortune, inheritance. Protection and happiness for the consultant.

Reversed: There are some delays, difficulties, the luck will be shorter but, the prediction remains favorable.

If this card has to her right:

THE KING OF CLUBS:
A man will bring the fortune to the consultant.

THE QUEEN OF CLUBS:
Success will be due to a woman.

THE JACK OF CLUBS:
The consultant will be the sole designer of his triumph.

THE TEN OF CLUBS:
Significant financial success for the consultant.

NINE OF CLUBS:
The consultant will have a financial success he does not expect.

THE EIGHT OF CLUBS:
A young brown girl will bring great satisfaction to the consultant.

THE SEVEN OF CLUBS:
Important help from a friend.

THE ACE OF HEARTS:
The consultant will receive some very pleasant news. Letters or declaration of love possible.

THE KING OF HEARTS:
Marriage financially favourable to the consultant.

THE QUEEN OF HEARTS:
Very important help from a friend.

THE JACK OF HEARTS:
Promotion coming up.

THE TEN OF HEARTS:
Inheritance, joy due to money.

THE NINE OF HEARTS:
Success.

THE EIGHT OF HEARTS:
Declaration of love, marriage.

SEVEN OF HEARTS:
Success in projects.

THE KING OF DIAMONDS:
Financial success.

THE QUEEN OF DIAMONDS:
Success of money coming, in spite of herself, from a slanderous woman.

THE TEN OF DIAMONDS:
Beneficial change for the consultant.

EIGHT OF DIAMONDS:
Steps for money or travel.

THE SEVEN OF DIAMONDS:
Don.

THE ACE OF SPADES:
Unexpected news about money.

THE KING OF SPADES:
Important legacy.

THE QUEEN OF SPADES:
Inheritance due to the death of a relative

THE JACK OF SPADES:
Risk of money theft.

THE TEN OF SPADES:
Risk of burglary.

THE NINE OF SPADES:
Inheritance due to sudden death.

THE SEVEN OF SPADES:
Loss of money followed by a higher gain.

add a comment from Meaning of The Ace of Clubs