The Ace of Hearts 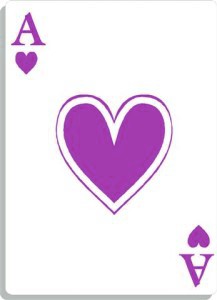 Upright: This card represents news, visits, joy, or an invitation to a party or ball. It also suggests the consultant's home.

Reversed: A few annoyances amidst joy and good news. This position mitigates the expected happiness in the home.

THE KING OF CLUBS:
Very beneficial and advantageous association.

THE QUEEN OF CLUBS:
Very interesting and profitable union.

THE JACK OF CLUBS:
Significant gain.

TEN OF CLUBS:
Financial benefit in a commercial business.

THE SEVEN OF CLUBS:
Amount of money recovered but of little value.

THE KING OF HEARTS:
Declaration of love.

THE QUEEN OF HEARTS:
Proposal of marriage, proposal of legalization of an affair.

THE JACK OF HEARTS:
The consultant will soon see the sincerity of someone close.

THE TEN OF HEARTS:
Very quickly a passion will be satisfied.

THE NINE OF HEARTS:
The loyalty of a very dear person will be shown to the consultant by a letter or a short story.

THE EIGHT OF HEARTS:
Love letter or phone call from a young blond or light brown girl.

THE ACE OF DIAMONDS:
Wedding announcement or invitation.

THE KING OF DIAMONDS:
Meet a military man who will be pleasant.

THE QUEEN OF DIAMONDS:
Good news from a friend.

THE JACK OF DIAMONDS:
A friendly person will visit the consultant.


THE TEN OF DIAMONDS:
Proposal of marriage, proposal of legalization of an affair.

THE NINE OF DIAMONDS:
Reproach.

THE EIGHT OF DIAMONDS:
The consultant will receive a letter or a piece of news that may affect his or her emotional life.

THE SEVEN OF DIAMONDS:
The consultant will be invited to a friend's house.

THE KING OF SPADES:
Trial, litigation for the consultant with one of his parents.

THE QUEEN OF SPADES:
A trap will be set dishonestly.

THE JACK OF SPADES:
Trouble caused by a family member of the consultant.

THE NINE OF SPADES:
News about the death of a loved one of the consultant.

THE EIGHT OF SPADES:
Divorce.

THE SEVEN OF SPADES:
Sentimental problems.

add a comment from Meaning of The Ace of Hearts