Meaning of the Ace of Spades 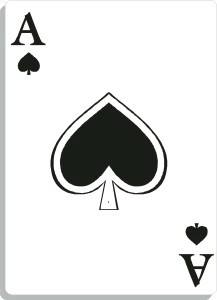 Upright: This card represents success, happiness in love, in the home. If the neighboring cards don't confirm it, there will be delays, difficulties, problems, but success and achievement will be at the end of the road.

Reversed: This card represents a success, a fleeting success, a temporary happiness, but also problems, bad news or letters.

THE KING OF CLUBS:
Success that was not or no longer expected.

THE LADY OF CLUBS:
A woman is going to help the happiness, the success of the consultant.

THE JACK OF CLUBS:
The consultant's projects will be successful, he will complete them and they will bring him complete satisfaction.

THE TEN OF CLUBS:
Asking for money that won't be needed.

THE EIGHT OF CLUBS:
Success for sentimental companies.

THE SEVEN OF CLUBS:
The consultant will pay his debts.

THE ACE OF HEARTS:
Happiness and sentimental success.

THE KING OF HEARTS:
A friend or protector will be of great help to the consultant.

THE LADY OF HEARTS:
A big-hearted woman will be of service.

THE JACK OF HEARTS:
Announces a party connected with a romantic liaison.


THE TEN OF HEARTS:
Success, success.

THE EIGHT OF HEARTS:
Association that will bring joy and be profitable.

THE SEVEN OF HEARTS:
Union, legalization of an affair, love marriage with every chance of happiness.

THE KING OF DIAMONDS:
Happiness in love, sentimental joys.


THE LADY OF DIAMONDS:
Success, success in a business.

THE JACK OF DIAMONDS:
Announcement of a trip, a trip to be taken care of.

THE TEN OF DIAMONDS:
Travel, travel that will bring success.

SEVEN OF SPADES:
A joke to be ignored.

THE KING OF SPADES:
Long illness, longer than expected recovery.

THE QUEEN OF SPADES:
Name-calling, arguing with a bad person.

THE JACK OF SPADES:
End of an argument, reconciliation.

THE TEN OF SPADES:
Healing, back to health.

THE NINE OF SPADES:
Danger averted.

THE SEVEN OF SPADES:
Problems, troubles, worries will not alter the expected success.

add a comment of Meaning of the Ace of Spades