The Jack of Spades 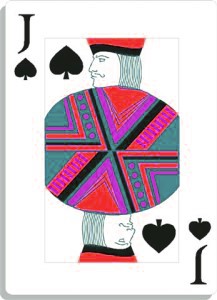 Upright: This card represents a man who is often brown or dark chestnut, without much frankness, in bad faith, wicked, dishonest, who should be beware. It also means: betrayal, jealousy, adultery, risk of break-up. Omen of debauchery, improvidence, prison.

Reversed: The evil and wicked person is always there, but he or she will not be able to cause the harm and evil that he or she desires. It represents a false friend, a selfish close person and betrayals of all kinds. However, bad plans are hindered or delayed.

THE ACE OF CLUBS:
The consultant will be subject to deception, fraud.

THE KING OF CLUBS:
Subordinate, dishonest and disloyal employee.

THE QUEEN OF CLUBS:
The consultant is going to be the object of gossip, gossip, bad words.

THE TEN OF CLUBS:
Theft of a significant amount of money.

THE NINE OF CLUBS:
An evil and dangerous man will cause great harm.

THE EIGHT OF CLUBS:
The consultant is about to be assaulted.

THE SEVEN OF CLUBS:
Disappointment following a given breach of trust.

ACE OF HEARTS:
Letter, news that will alter the happiness and serenity of the consultant.

THE KING OF HEARTS:
Misbehaviour or infidelity will destroy happiness.


THE LADY OF HEARTS:
Beware, a seducer will cause trouble if you don't get him out of the way.

THE JACK OF HEARTS:
Beware, the consultant is in bad company which can lead to very big problems.

THE TEN OF HEARTS:
An enemy won't get his way.

THE NINE OF HEARTS:
Arresting a thief, a criminal.

THE EIGHT OF HEARTS:
The plots will be thwarted.

THE KING OF DIAMONDS:
Disputes.


THE JACK OF DIAMONDS:
Letter causing problems and trouble.

THE TEN OF DIAMONDS:
Travel, travel made for the wrong purpose.

THE NINE OF DIAMONDS:
Bad deal.

THE SEVEN OF DIAMONDS:
A joke, a taunt in bad taste will provoke anger.

ACE OF SPADES:
The consultant will be the victim of slander or a trap set for him.

THE KING OF SPADES:
Loss of money due to justice, due to a lawman.

THE LADY OF SPADES:
A detractor will not get his way, the consultant will not be affected.

THE TEN OF SPADES:
A dangerous character will be put out of action.

THE NINE OF SPADES:
Attempted assassination that will fail.

THE EIGHT OF SPADES:
Injury.

THE SEVEN OF SPADES:
A robbery will cause problems.

add a comment of Meaning of The Jack of Spades