Meaning of The King of Diamonds

The King of Diamonds 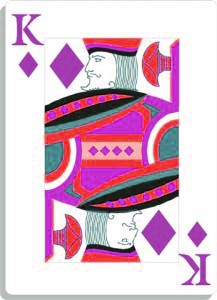 Right: This card represents a married man, a dangerous, haughty, unscrupulous man. It can represent a protector or a friend. For a young man, it is a rival; for a young girl, a seducer, a man in uniform. It can be beneficial for business, for the situation, for work.

Reversed: Difficulties, obstacles delaying good forecasts. Approach of a danger, which can only be avoided by one's own skill. If the neighborhood confirms it, announcement of an unsafe friend, quarrels, difficulties with him.

THE ACE OF CLUBS:
The consultant is about to be robbed.

THE LADY OF CLUBS:
The consultant is going to get a visit from a lawman that will be beneficial to him.

THE JACK OF CLUBS:
The consultant will have a very interesting business proposition.

THE TEN OF CLUBS:
Gift from a man living in the provinces.

THE NINE OF TREFLE:
A union, a marriage will bring an elevated situation.

THE EIGHT OF CLUBS:
A soldier, a man in uniform will bring joy.

THE SEVEN OF CLUBS:
Gain of money, profit made in trade.

THE ACE OF HEARTS:
Love letter sent to a man in uniform, to a soldier.


THE KING OF HEARTS:
A sentimental approach will cause problems for the consultant.

THE LADY OF HEARTS:
Propose.

THE JACK OF HEARTS:
Remoteness or absence of short duration.

THE TEN OF HEARTS:
Sentimental rivalry.

THE NINE OF HEARTS:
Great success.

THE SEVEN OF HEARTS:
Abandonment of a close and dear person.

THE ACE OF DIAMONDS:
News of a trial.

THE LADY OF DIAMONDS:
Quarrel in the family.


THE JACK OF DIAMONDS:
Someone's trying to harm the consultant.

ON THE TENTH OF DIAMONDS:
Long business trip.

NINE OF DIAMONDS:
Quarrel due to interest.

THE EIGHT OF DIAMONDS:
Problems, difficulties between parents.

ACE OF SPADES:
Gain in a lawsuit we thought was lost.

THE KING OF SPADES:
Threats from an enemy.

THE QUEEN OF SPADES:
Problems, difficulties with a widow.

THE JACK OF SPADES:
A disloyal man will hurl slanders, slander against the consultant.

THE TEN OF SPADES:
Ruin or very big financial problems threaten the consultant.

THE NINE OF SPADES:
Danger of death.

THE EIGHT OF SPADES:
Risk of illness for the consultant.

THE SEVEN OF SPADES:
Risk of pain and sorrow for the consultant.

Meaning of the Ace of Spades

add a comment of Meaning of The King of Diamonds

We have been able to provide in 98% of times, the solutions that users were looking for when consulting our page.