Meaning of The King of Spades

The King of Spades 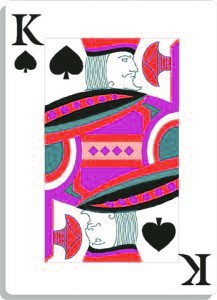 Reversed: It announces the loss of a lawsuit, jealousy, envy on the part of a man. But it is also an enemy reduced to impotence.

THE KING OF CLUBS:
Beware of spending and financial mismanagement that can lead to trouble.

THE QUEEN OF CLUBS:
The consultant will be subjected to slander, slander, jealousy that will harm him, hurt him.

THE JACK OF CLUBS:
Money-linked business that will be disastrous; do not invest in the stock market now.

THE NINE OF CLUBS:
A bad man will jeopardize happiness, success.

THE EIGHT OF CLUBS:
A man of the law: judge, lawyer, bailiff, etc., will bring bad news, annoyance, trouble.

THE SEVEN OF CLUBS:
A man will try to use the consultant, try to trick him.

THE ACE OF HEARTS:
Gossip and slander will lead to sentimental problems.

THE KING OF HEARTS:
Sentimental breakdowns, failures in plans to legalize relationships or marriage.

THE LADY OF HEARTS:
Trouble, misfortune due to a man of justice.


THE JACK OF HEARTS:
Invitation to a party, a meal related to love, e.g. introduction of a person the consultant will fall in love with, or engagement.

THE TEN OF HEARTS:
Big problem or sentimental grief.

THE NINE OF HEARTS:
The consultant will have the upper hand over his enemies, he will win in disputes.

THE EIGHT OF HEARTS:
The loved one will cause trouble, pain, sorrow.

THE SEVEN OF HEARTS:
A man tries to harm the couple, the marriage, the consultant's union.

THE KING OF DIAMONDS:
Nefarious projects that will only lead to problems and trouble.

THE LADY OF DIAMONDS:
A man will try to do harm out of vengeance or stupidity.

THE JACK OF DIAMONDS:
A fake friend will give news or send a letter to the consultant, which should be beware because the person is a fake.

TEN OF DIAMONDS:
Displacement due to bad news or business.


THE NINE OF DIAMONDS:
Delay due to a bad person.

THE EIGHT OF DIAMONDS:
Trouble with the law, the police.

SEVEN OF DIAMONDS:
A joke to be wary of because it will be harmful and may cause harm.

ACE OF SPADES:
Unforeseen problem during litigation, a trial.

THE LADY OF SPADES:
Problems, slander without consequences.

THE JACK OF SPADES:
A betrayal will bring very big problems for the consultant. Be wary because there is a very high risk of project failure or ruin.

THE TEN OF SPADES:
Loss of a dispute, a lawsuit that will cause very big problems for the consultant.

THE NINE OF SPADES:
A death that will lead to big problems.

THE EIGHT OF SPADES:
Litigation, a lawsuit will cause big problems, even illness.

SEVEN OF SPADES:
A lawman will cause big trouble.

Meaning of The Queen of Hearts

The Meaning of the 10 of Spades

add a comment of Meaning of The King of Spades