The Meaning of the 10 of Spades 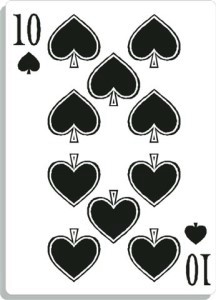 Reversed: Bad predictions are softened; if there is pain, it will be ephemeral. Success over trouble.

THE KING OF CLUBS:
Financial loss.

THE LADY OF CLUBS:
Protection will be lost and very big trouble will result.

THE JACK OF CLUBS:
If the consultant does not pay more attention to his actions, he risks serious problems with the law and even imprisonment.

THE TEN OF CLUBS:
The consultant will make an inheritance or receive a large sum of money.

THE EIGHT OF CLUBS:
Business, projects are doomed to failure.

THE SEVEN OF CLUBS:
Big financial problem, threat of ruin.

THE KING OF HEARTS:
The expected inheritance will not arrive or will be less than expected.

THE LADY OF HEARTS:
Sentimental disappointments.

JACK OF HEARTS:
Jealousy will provoke a few arguments.

THE NINE OF HEARTS:
Quick success.

THE EIGHT OF HEARTS:
Very serious sentimental problem, breakup coming soon which will be hard to avoid.

THE SEVEN OF HEARTS:
Trap.

THE KING OF DIAMONDS:
Disputes, quarrels with a foreign man or a man who is out of the usual living environment.

THE LADY OF DIAMONDS:
An unknown person will be the cause of trouble, trouble.

THE JACK OF DIAMONDS:
Letter, news of bereavement; death announcement.

THE TENTH OF DIAMONDS:
High risk of loss of situation, work; unemployment or dangerous travel.

THE SEVEN OF DIAMONDS:
A prank, a joke in bad taste will lead to anger, an argument and even a quarrel.

THE ACE OF SPADES:
The consultant is going to be very affected when he learns of a person's illness.

THE KING OF SPADES:
Bad news coming from a man of the law: judge, lawyer, bailiff.

THE QUEEN OF SPADES:
An acquaintance of the consultant is about to hear some very bad news.

THE JACK OF SPADES:
Unsavoury company will cause very serious problems.

THE NINE OF SPADES:
News of a misfortune, a death in the consultant's entourage.

EIGHT OF SPADES:
The consultant may become seriously ill.

add a comment of The Meaning of the 10 of Spades