The 8th of spades 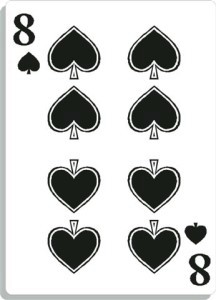 Reversed: The meaning is generally bad but it can change, depending on the neighbouring cards. It indicates a transformation due to an unexpected event. It also means an affair, marriage or a broken business.

THE ACE OF CLUBS:
Poverty, misery.

THE LADY OF CLUBS:
A young woman meditates and spreads lies about the consultant.

THE JACK OF CLUBS:
Bad companies and business.

THE TEN OF CLUBS:
Big financial loss, threat of ruin.

EIGHT OF CLUBS:
Problems, obstacles to success due to the disease.

THE SEVEN OF CLUBS:
End of illness, recovery.

THE ACE OF HEARTS:
Letter of condolence.

THE KING OF HEARTS:
Sudden and unexpected breakup in love.

THE LADY OF HEARTS:
A sudden and unexpected end to an affair.

THE JACK OF HEARTS:
The consultant will learn of a friend's illness.


THE NINE OF HEARTS:
A sentimental problem will cause health problems.

THE EIGHT OF HEARTS:
Sorrows, heartache.

THE SEVEN OF HEARTS:
Unpredictability.

THE ACE OF DIAMONDS:
Anonymous letter.

THE KING OF DIAMONDS:
An enemy, a rival will cause difficulties, trouble.

THE LADY OF DIAMONDS:
Grief coming from a jealous woman.

THE JACK OF DIAMONDS:
A subordinate, an inferior is going to cause problems, penalties.


THE TEN OF DIAMONDS:
Travel, travel proving to be unpleasant.

NINE OF DIAMONDS:
Waste of time.

THE KING OF SPADES:
Big trouble, trouble caused by a lawman.

THE LADY OF SPADES:
A woman will cause annoyance and sorrow.

THE JACK OF SPADES:
Bad company and unsavoury people will be the source of very serious problems and misfortune.

THE TEN OF SPADES:
A breakup, an abandonment will be the cause of an illness.

THE NINE OF SPADES:
Death, death from disease.

THE SEVEN OF SPADES:
One death, one death will cause great sorrow.

add a comment from The Meaning of the 8 of Spades