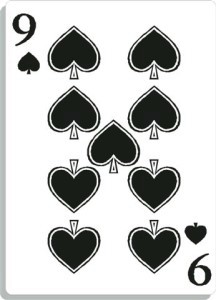 Reversed: In this position, it is less dangerous but still very harmful. She foresees very big trouble and problems. It will be necessary to be very careful and to be wary of people, of friends to whom one tends to give his confidence because there is a risk of deception.

ACE OF CLUBS:
Death, bereavement that will benefit the consultant.

THE KING OF CLUBS:
Death, death of an enemy.

THE LADY OF CLUBS:
Protection for a person who is between life and death or simply against death in general.

THE JACK OF CLUBS:
The consultant will feel great joy upon learning of the death of an enemy, an adversary.

THE TEN OF CLUBS:
The consultant is going to make a fortune, is going to have a consequent increase in his finances and his lifestyle following a death, a death.

EIGHT OF CLUBS:
Problems, difficulties caused by a death.

SEVEN OF CLUBS:
No more difficulties, no more torments.

THE ACE OF HEARTS:
The consultant is about to get some very bad news.

THE KING OF HEARTS:
Disputes, scrambling among friends, among very close people.


THE LADY OF HEARTS:
Breakup with a loved one, very close.

THE JACK OF HEARTS:
Break up with a friend.

THE TEN OF HEARTS:
The projects, the consultant's business is doomed to failure.

NINE OF HEARTS :
A project, a case is going to have a bad outcome.

THE EIGHT OF HEARTS:
Disputes, discord in love.

THE KING OF DIAMONDS:
Death, death of a distant relative.

THE QUEEN OF DIAMONDS:
Death, death of a distant relative.

THE JACK OF DIAMONDS:
The consultant will learn of the death of a relative living in the countryside.

THE TEN OF DIAMONDS:
Fatal or very serious accident while traveling or on a trip. Example: a car accident that will cause very serious bodily injury resulting or likely to result in death.


THE NINE OF DIAMONDS:
Bad news.

THE SEVEN OF DIAMONDS:
Prank, joke in very bad taste leading to grave and serious trouble.

THE ACE OF SPADES:
The consultant will be surprised and saddened by the news of a death.

THE KING OF SPADES:
The consultant has to be very careful, a fatal accident threatens him.

THE QUEEN OF SPADES:
A wickedness, a malevolence, will be the cause of difficulties, of misfortune.

THE JACK OF SPADES:
Meeting with an unsavoury person.

THE TEN OF SPADES:
Misfortune leading to death.

THE EIGHT OF SPADES:
A disease that lasts and leads to death.

Meaning of The Queen of Hearts

Meaning of The 9 of Clubs

add a comment of The Meaning of the 9 of Spades