Dreaming of frog: What meanings?

Author and references
Dreaming of frog: What meanings? 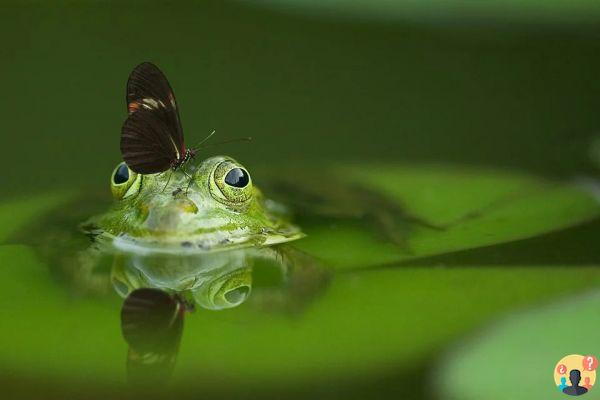 What does dreaming of a frog mean? What are its details and how can this be interpreted in dream interpretation? In this article I explain everything about this dream whose meaning depends on its details.

Dreaming of a frog - The most common dreams about the symbol

Dreaming of frogs and other animals

Dreaming of a toad

The toad is distinguished from the frog by its thicker body. Most often, in a dream as in reality, a toad has bumps and warts on its body, short legs, a round and wrinkled appearance.

This animal in dreams symbolizes the beautiful that has so far remained hidden. Perhaps the person having the dream is unaware of their inner or outer beauty and often feels unattractive or difficult to deal with. Now is the time to boost your confidence!

A frog, which is usually narrower and has smoother skin than a toad, stands in the interpretation of dreams for represent a happy phase of life. Everything seems to be going well: in love, at work, within the family.

Dreaming of frogs and snakes

If you encounter a snake in your sleep, your own instincts, sexual urges and feelings symbolically appear. In relation to a frog or several frogs, the snake indicates a happy and fulfilling life of one's own sexuality.

The frog according to the places

Dream about a frog in the water

As a dream image, water represents inner purification and letting go. If one recognizes a frog in the water in the dream event, then the dreamer is going through an important phase of one's life.

Dreaming about frogs in bed

Most people find it terrible that many small animals crawl or hop around in their bed. The frog in bed is a dream that hides positive aspects: it represents a happy and well-functioning partnership. (See Dreaming of Bed).

If you have known your partner for a long time, now is the time to refresh your (sexual) relationship. If you are single, you should socialize and flirt vigorously - now you might meet an interesting and attractive person!

Many frogs that appear everywhere in dreams and take over as a real plague, indicate for the dreamer a reversal of their own happiness. If other dream images also speak of this, then a period of bad luck may be coming. But do not worry: such bad times will pass.

If a frog is observed mating in the dream, the dreamer is basically satisfied with his life, even in difficult times.

Dream about being disgusted by a frog

Not only in reality, but also in the dream world, a frog often triggers the feeling of disgust. The animal is small, cold, slippery, suddenly bounces and caws strangely.

As a dream symbol, the disgust of a frog indicates fear of the sleeper. This fear is linked to something new in his life. What he doesn't know worries him. The dream situation reminds you to be more open and less afraid of the unknown.

A confusing dream is to eat a whole frog. If the frog is in the mouth, this dream situation indicates possible illness or inhibited communication. A debate may be imminent to clarify a point of dispute. The frog meal indicates the motivation the dreamer needs to move forward in life and find happiness. (See Dreaming of Eating).

Dream about saving a frog

Anyone who rescues a frog in their dream, for example helps it cross a street, or protects it from a predator, will be able to successfully make an important decision and implement a plan. People who are in a development phase are finally discovering what they really want to achieve in life.

Dreaming about an aggressive frog

Dream about being followed by a frog

If in your dreams a frog was following you, and you do not like this animal in reality, the dream situation can create panic. Above all, fear of an important decision is behind this type of dream. Is there something you've been putting off for a long time? (See dream of being sued).

Dream about a frog jumping on you

Don't worry, if a frog jumped on you in the dream world, that's a good sign! Your subconscious encourages you as you sleep to take a decisive step or tackle a risky project. Only those who dare will win.

Dream about being bitten by a frog

You're in luck! As a rule, dreaming about a painful animal bite is a good sign. If it is a little frog that bites you in a dream, in the near future, you'll create almost anything you set out to do with ease.

Friends, family and acquaintances are happy with you for success. If you have been looking for a life partner for a long time, the chances of finally finding that Prince Charming are increasing now! This is especially true when other dream symbols fundamentally support this interpretation.

Dreaming of a yellow frog

The color yellow refers to envious people in dream symbolism, so you should pay attention to the dream image of a yellow frog. The success that the dreamer now enjoys through the "frog" symbol in the waking world is not granted to the person concerned by every person in his or her environment. There is at least one person who wishes you harm. 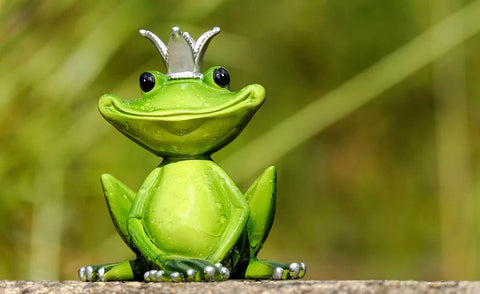 Often the animal appears to people who are currently in a transitional phase in waking life. Because the frog is considered an animal that can adapt very well to two environments – namely water and land.

For the dreamer, this means leaving the old behind and embarking on new paths in the future. The frog in the dream should be taken as a positive sign.

If the dreamer sees a frog in his sleep, he will have a good standard of living in the future. Frogs in the grass predict to the dreamer that he has or will find trusted friends in the waking world.

The dream symbol "frog" in connection with a swamp means trouble for the dreamer in the general interpretation of the dream. But thanks to the kindness of others, he will survive unscathed.

If the dream hears frogs croaking in its sleep, it can soon expect praise in the waking world. Also, this dream situation can be interpreted as an upcoming visit to friends, during which the dreamer does not achieve his goals.

According to the general dream interpretation, holding a frog in your hand in a dream is interpreted as a sign of profit. If the dreamer catches or kills a frog in his sleep, the dream symbol means pending suffering or that he will get hurt. He also cares too little about his own well-being, which worries his family.

Eating a frog in the dream predicts sickness in the dream in the first place. But it can also represent a fleeting pleasure.

The dream symbol "frog" is seen in psychological dream interpretation as a symbol of fertility and desire. Moreover, it can also be interpreted as a character trait of the dreamer, which he should change.

In men's dreams, the "frog" dream symbol appears quite rarely, most girls or women see a frog in dreams, especially in connection with the "Frog Prince" fairy tale. The frog in the dream has the function of preparing the man for female sexuality.

Conversely, the Prince, freed from the form of the ugly frog with a kiss, has the meaning in women's dreams of longing for a man. The dream wants a partner who has good manners, who is charming, strong, courageous and at the same time caring.

According to the psychological dream interpretation, the dream symbol often symbolizes the woman's wish that her partner be more attentive to her sexual needs.

Also, since the frog can live both in water and on land, in dream interpretation it is considered a symbol of change. On the one hand the personality of the dreamer, on the other hand his living conditions can be impacted. With change comes recognition, profit and love for the dreamer.

In spiritual dream interpretation, the dream symbol “frog” characterizes transformation. Because the frog is a living being that can adapt very strongly to its environment in its different phases of life.

Dreaming of garden: What meanings? ❯

add a comment of Dreaming of frog: What meanings?