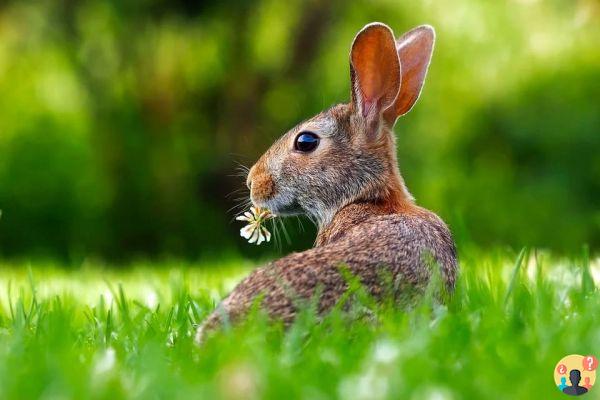 If you've had the chance to observe rabbit behavior up close and, in particular, how rabbits rest, you've probably realized that their sleeping and waking habits are completely different from ours, and those of humans. other species.

Let's try to shed some light on this question, by reporting everything you need to know about rabbit sleep: how and how long they sleep, and what you could do to improve their sleep characteristics!

What does a typical day look like for a rabbit?

A rabbit's typical day begins with waking up around dawn and getting plenty of activity until mid-morning when he eats, grooms and plays.

Then they return to their den and rest for a while: the sleep of rabbits - for reasons that we will soon see - is in fact concentrated mainly in the daytime part of the day, then they return particularly active in the evening and also at night. .

How long do rabbits sleep?

Although how long rabbits sleep depends on a number of factors, these adorable animals typically sleep between 6 and 10 hours a day. The rabbit is unlikely to sleep that long in a single "session" of rest.

Their sleep is indeed generally very light, because the rabbit must necessarily remain vigilant to avoid the dangers of predators. The rabbit's naps are therefore numerous, light and fairly divided.


How do rabbits sleep?

Rabbits sleep in particular positions which are once again linked to the need for security. This is why rabbits tend to adopt positions that imply the possibility of fleeing immediately in case of danger.

In the wild, without your warm protection, rabbits are natural prey. Precisely for this reason, they had to quickly adapt their behavior to the environmental circumstances, finalizing it in such a way that they could avoid unpleasant encounters with predatory animals.

In this sense, the rabbit's sleep rhythms become real defense weapons. And it is precisely for this reason that rabbits are most active and dynamic in the evening and early in the morning, since they sleep at different times of the day. That is to say when they feel that the nocturnal predators of which they are often victims are not there.

However, it doesn't matter that your rabbits live in domestic comfort: their instinct remains innate and, with it, their attitudes towards sleep and wakefulness.

How to improve rabbit sleep?

If you want to improve the rabbit's sleep, avoid changing its habits and routines, even if they seem "strange" to you and even if the rabbit seems to remain active even when you are lying down.

Remember that it's in his nature and you should try to let him choose how to behave. Otherwise, the rabbit may become nervous and restless. Instead, it's better to spend time with him and play when he's most willing and...accept that he can last the wee hours!