Which short sleep story is recommended? For you, we have selected the best short stories for sleeping.

Many people like to read bedtime stories to their children. Sleep can last 8-12 hours depending on age. Parents who read think it's much better than letting their kids watch TV or play a game. child development.

Experts working on topics related to child development claim that reading for at least half an hour a day can significantly improve oral and cognitive skills. Also, it enhances imagination and curiosity and many other aspects of a child's life. Research shows that children who were read regularly from the start were more successful in language learning and overall academic achievement.


There are so many books and short stories written for children of all ages these days that sometimes it can be hard to choose. It all depends on your child's preferences. For example, some like funny bedtime stories for children, and some are not so fond of this kind of humor. We've compiled a list of 10 stories we love here, which might give you some ideas on where to look for the perfect stories for your child. 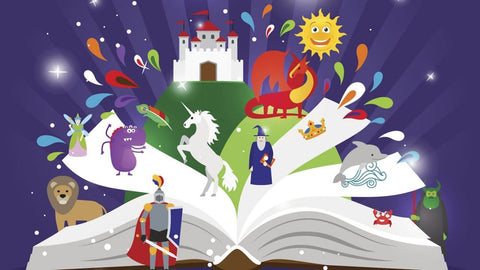 Short stories for sleeping: The 10 best

1. Aladdin and the magic lamp

It is a well-known story from the Nights of the Orients, also known as 1001 nights. The central character is a boy named Aladdin. The story begins when Aladdin meets a wizard, posing as his uncle, who promises him great riches if he goes with him. Wanting a better life, a boy follows the man, and that's where his adventures begin.

This is a lovely classic children's bedtime story about a baby male deer Bambi, his mother and his friendship with a rabbit. Bambi is a smart and curious young deer who has different adventures with his two best friends. And at the same time learn that everything he learned from his parents about life in the forest.

Because the king and queen didn't invite Maleficent to celebrate the birth of their child, she decided to get revenge by cursing the little princess. She then said the princess would prick herself on a spinning wheel on her 16th birthday, after which she will sleep for 100 years. Only the true kiss of love can save her.

Geppeto, a lonely carpenter, wants the last puppet he named Pinocchio to become a real boy. The kind blue fairy heard and decided to grant her this wish. Knowing that Pinocchio will be naive, she entrusted him to Jiminy Cricket to keep him out of trouble. However, Jiminy encounters many difficulties while trying to keep him on track. While at the same time, Pinocchio begins to understand that he must prove that he deserves to be a real boy.

Ariel, the sea king's daughter, stumbles upon the human prince she met on the shore. Even though all her friends try hard to convince her to stay little mermaid, she makes a pact with the sea witch so that she becomes human.

This is a British children's story written by Margery Williams. It's the story of a stuffed rabbit who wants to become real. At the beginning of the story, the boy who received the rabbit as a Christmas present does not seem very interested. But throughout the story, after sleeping one night with the plush toy, they become inseparable. But will the rabbit become real?

This is a story of love and beauty. A mother duck's happiness is disrupted when she realizes that one of six newly hatched ducklings isn't what it's supposed to be.

Writer Jon Klassen tells the story of the bear who wants his lost hat back. It's an original and funny story told through dialogue.

Antoine de Saint Exupéry wrote this magical fable. It's about the adventures of a little boy who is a prince on asteroid B-612.

We hope you liked every classic short story for kids at bedtime that we have prepared for you. Of course, there are many other great bedtime children's stories that you can choose to read to your children.