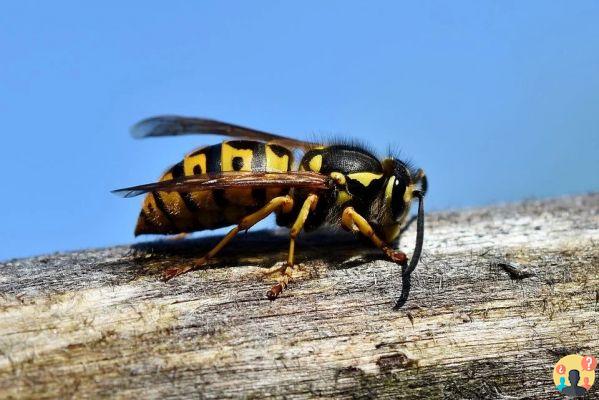 Dreaming about a wasp can be somewhat confusing or uncomfortable depending on the circumstances. It is a widely known, but often feared insect. Because despite being very common, it is not a pleasant dream for most people.

The first thing you need to be clear about is whether the insect that appears in your dream is really a wasp. It is often confused with the bee. It is an insect best known for its bite, which can be produced through its stinger.

Because of this, it might be unpleasant to dream of wasps. However, its symbolism does not necessarily have negative connotations.

Wasps are powerful and warlike insects, so one of the meanings of this dream is related to this force.

They are also insects that work together, they can personify a strong family bond.

What is the meaning of dreaming about wasps?

In general, dream analysis experts say that you should be careful if you dream of wasps. Since in most cases this dream is not accompanied by positive signs. Analysts associate wasps in dreams with need to stay out of a brewing conflict

Although the meaning of each dream about wasps depends on a wide range of factors, it is necessary to remember how the dream happened with all its circumstances and what it was like. Because not all dreams with wasps mean the same thing and can be very diverse. The behavior of the wasp or wasps and their actions will affect the meaning of the dream. As well as for the sensations felt during the dream.

Dreaming of wasps at home

Dreaming of wasps at home is the warning sign of events beginning to occur. Since this dream represents a situation that is about to happen or begins at one's home or most personal part, represented by the house in dreams.

You must go unnoticed or try to participate as little as possible. Otherwise, you may be negatively affected or suffer long-term consequences. In turn, dreaming of wasps at home and killing them represents revenge. It may represent the unconscious desire for revenge or plans to achieve it.

Although dreams with large wasps may seem more dangerous than dreaming about common wasps, it is not entirely true. This dream is strictly related to interpersonal relationships and their stability.

To dream of large wasps means thata relationship can be threatened by a problem. It can be a friendship or a family relationship.

Dreams about stinging wasps can be a particularly scary dream and can turn into a nightmare. These well-known insects have both a bothersome and painful sting.

Dreaming of stinging wasps, in the vast majority of cases, represents the fear of being hurt or attacked by someone. It can also be a sign of possible revenge. 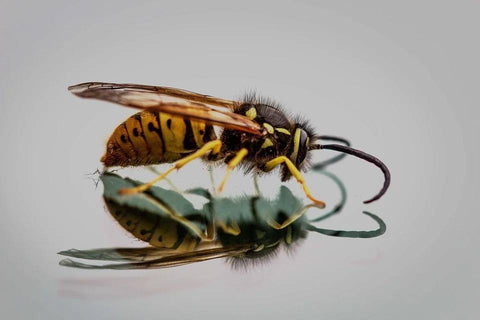 Like other dreams, with unpleasant animals, dreaming of dead wasps means overcoming your fears. It represents a strong and persevering temperament ready to face all circumstances. Due to its relationship with death, it can be a symbol of growth and maturity. So, dreams with dead wasps represent an upcoming change that could be positive. Death is often positive in dreams.

This is one of the most notable dreams related to wasp symbolism. Dreams with black wasps represent a strong danger or very big concerns to work on. In either case, situations need to be dealt with quickly to avoid repercussions. In some cases, they can be a manifestation of unconscious jealousy towards another person, expressed by dreaming about black wasps.

Dream about wasps on the body

In some cases, wasps can have positive connotations and can be signals of growth. Dreams with wasps on the body mean fear. So having these types of dreams is a good time to identify these fears. Despite being an unpleasant dream to dream of wasps on the body, it is a good opportunity for self-improvement.

Wasps are usually associated with a strong and somewhat angry character. Similarly, dreams of red wasps can refer to emotions similar to anger. It can be a signal to work on angry behaviors that are commonly triggered.

Or they in turn can be a warning sign to take care of someone who behaves in this way. Since this person might try to attack or hurt you and you are warned when dreaming about red wasps.

Although it is a very specific dream, dreaming about yellow jackets is a clear warning. Although wasps seem independent beings, they work closely together to be able to maintain a nest. In this nest, the wasps form a family and in the same way this dream alerts us to a family issues.

Dreams with yellow jackets respond to a problem with a loved one, not necessarily blood related. It is a signal to resolve a conflict with an important person before it escalates.

Dreaming about wasps chasing you

Dreaming of wasps chasing you may be the next step after dreams of yellow jacket wasps. Since these experiences mean possible betrayal by someone very close. They are a warning to act before it happens, like all dreams of being chased.

These dreams where wasps are chasing you can also signify worries and the desire to overcome them. In the same way, if in pursuit you are hit by the wasps, it means that you have not tried hard enough. So dreaming that you are effectively running away from wasps means that you are dealing with problems correctly.

To have wasp stings in dreams usually represents fear of trouble. Since these dreams are associated with the envy of people around you.

Which can cause problems if they get too close. Dreaming of wasp stings is therefore an unconscious method to be ready in this situation. They can also represent the fear of the problems that envy can generate.

The Wasp hives in dreams represent issues that may soon be significant. However, a positive aspect of this dream is that it symbolically implies that you are ready to face trouble.

So this dream carries a positive and satisfying message. To dream of a beehive being destroyed may represent a desire to achieve a goal. So, destroying the nest represents facing the problem and achieving a goal.

Dreams should be evaluated at the time they are presented because they might have meaning. Dreaming of wasps based on various circumstances encompasses different and opposite meanings in some cases. Consideration of these aspects can be an extremely beneficial tool for progressive spiritual maturity.

If you dreamed of a wasp, but nothing in particular happened, then it is about the fact that potential problems are happening in your life.

Pay close attention to what the wasp is doing to make a more accurate interpretation. The distance the wasp is from indicates the proximity of potential problems that are occurring in your life.

Direction of flight is important to make a correct interpretation of the dream, if the wasps circle around you for example, it is a very bad sign because problems surround you, but if the wasps move away, then it is the end of a phase of your life or problems were present.

Dream about killing a wasp

Dreaming of killing a wasp is a very positive sign, as the wasp represents negative things and problems in your life. Out, killing her is a sign of your courage and your success in facing this problem.

Murder in a dream is often positive because it represents ending something negative, which in this case is totally the case.

Chasing wasps reflects in the dream world your ability to face the problems that come your way.

The more successful the hunt, the more powerful your abilities to deal with problems in the waking world.

Dream about turning into a wasp

If in your dream vision you turn into a wasp, it is a sign that you You gotta trust yourself because your mind is blurry and the problem lies within you, in this ability to make things clear to better move forward in life.

This dream, although strange, is a clear sign from your subconscious that you need to solve your problems by properly controlling your thoughts so that they do not become a hindrance for you.

Dream about someone turning into a wasp

If someone in the dream becomes this animal, then it is that this person is becoming a problem in your life. If it's a stranger, it's yourself.

If the person is blurry, it's a sign that your subconscious has detected someone nefarious in waking life but on a conscious level it's still not very clear to you.

Dreaming of war: What meanings? ❯