Dreaming of Dragon: Which interpretation?

Author and references
Dreaming of Dragon: Which interpretation? 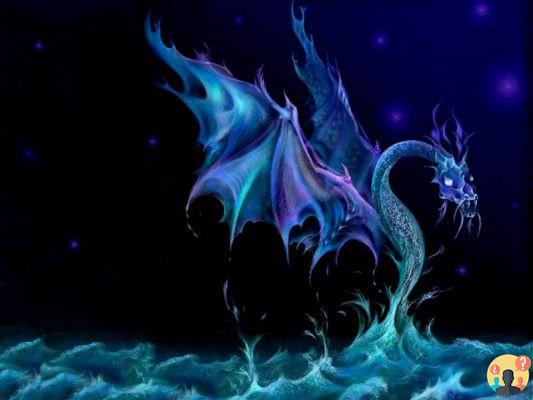 In the dream world, dreaming about dragons can have both positive and negative meanings. It all depends on how this creature appears in the dream and how it interacts with us. To know the specific meaning, you need to pay attention to all the details of the dream and analyze the personality and emotional situation you are feeling in the dream.

The dragon is a symbol of universal power and is in legend superior to all other terrestrial beings. It often appears in conflicts and conquests.

It can have many meanings in the dream sphere and therefore we have gathered the most common Dragon dreams for you.

Dreaming of a Flying Dragon: The Mystic of the Dragon

Many authors of fiction books mention it in their works and always in the form of a powerful and dangerous being. The word "dragon" comes from the Greek dercein which means 'to see.

China is the country where the dragon reached the highest notoriety and where it was made an emblem of imperial power. In this country, the dragon is more than just a mystical creature, it is also a being representing the link between the cosmic and the terrestrial. This symbolism varies depending on the colors of the dragon.

Mythology defines him as an almost invincible being where only the most seasoned heroes can defeat him to become legends that will pass through the ages.

Dreaming of a Dragon: The Importance of Type

Dreaming of a green dragon

A green dragon represents hard work. Depending on how you interact with the dragon in the dream, it will reflect your attitude towards any challenges you face in the job.

China, as we mentioned, is the country par excellence where the dragon enjoys an unrivaled notoriety. In fact, it is the emblem of imperial power which represents in the world of dreams the power that is wielded over you in real life.

If this mythological animal is red in your dream, it is a negative omen because this color symbolizes in this dream the fights and arguments you will have with your enemies. It can also symbolize betrayal on the part of a member of your family.

If you dream of directing a dragon in the air, then it is that you have the reins of your life and you can direct it where you want. Your mastery of the dragon determines the level of mastery you have over your life.


Dreaming of dragon and fire

If the dragon breathes fire in the dream, it represents that we are angry that we do not achieve our desires and that we tend to get carried away by our emotions and passions.

If you are in full control of yourself, it can turn into strength and help you in your real life.

Dreaming of a blue dragon

The blue dragon represents wisdom and intellect. Let them guide you to make the right choices and have good lifestyle habits. Blue in dreams is very often positive.

The situation of dragons in the dream


Dreaming of many dragons

Dreaming of multiple dragons represents fear of adversity and of his adversaries in real life. This is a sign of an inferiority complex.

It means being afraid of attacks in real life and of which there is strong apprehension. You don't know exactly where the attack will come from.


Dreaming of a dragon by your side

The dragon is a symbol of wisdom and long life, but this dream also signals the internal fight against your bad emotions and the dragon symbolizes them, being a creature of violence and conflict.


Dream about fighting with a dragon

Having a physical conflict with a dragon means in dream interpretation that we stand out and try to prove ourselves by accepting difficult and even dangerous situations. It is a fight against your doubts to achieve what you want to achieve. (See Dreaming of Fighting)

Dream about defeating a dragon

Dream about being defeated by a dragon

In this direction, the dream is a sign of your doubts about your accomplishments, you are afraid of failing and your subconscious communicates it to you through the dream. Being defeated or killed in a dream always misses an inability to cope with a situation.

Dream of running away from a dragon

Fleeing from a dragon is a sign that we don't want changes in life but that these appear all the same, such as a divorce or a move.

Dream that another person is attacked by a dragon

It is a dream that another person is attacked by a dragon is a warning that you need to be vigilant and pay more attention to those around you because some do not necessarily want good and can harm you;


Dreaming of a sea dragon

This type of dream vision is always the reflection of our fears of the sea. Specifically creatures that live inside the sea or the abyssal depths.

If you manage to save her, then this shows a strength in you to occupy positions of responsibility. ﻿

It means that small successes will happen and make you proud of your accomplishments, don't give up on your efforts because success depends on the effort you put into it.

An event of the utmost importance is approaching, it is still in its infancy but take a very important place in your life.

What conclusions can be drawn?

Dreams are reflections of our subconscious and must therefore be interpreted to make the best choices in life and better understand ourselves.

So take advantage of the dream you had to draw the conclusions that will help you in real life.

Dreaming about drugs: What meanings? ❯

add a comment of Dreaming of Dragon: Which interpretation?