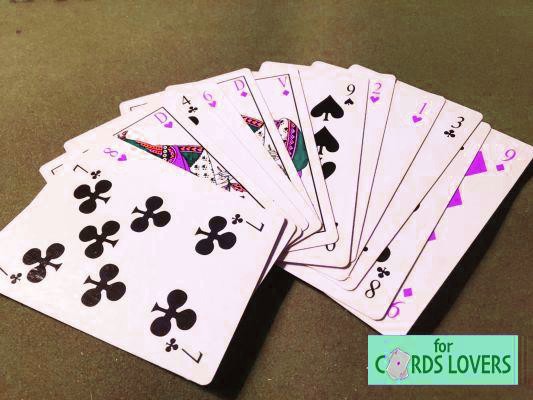 To play the Bridge game you need :

How is a game of Bridge ?

The Bridge is played in several moves. Each move is played in two steps. The first is the betting phase, the second is the card play phase where each player plays his cards in turn. In the 52-card deck, the heart and spade cards are the "major" suits, while the diamonds and clubs are the "minor" suits. Each player takes turns dealing by dealing 13 cards to each player in a clockwise direction. Then comes the time of betting.

The bids determine the trump (or no-trump) colour and the number of tricks (or tricks) to be made by the side that made the last bid. This camp is called the declarer's camp while the opponent's camp is the defence camp. The bid determines a number from 1 to 7, a suit or the fact of playing "no trump". For example "3 hearts" or "4 no-trumps" are bids. The colour will be the trump colour. Note that the colours are classified hierarchically: spades, hearts, diamonds and clubs from the most expensive to the least expensive. No trump being stronger than all the other colours.

How does an auction at the Bridge ?

The first bid is made by the dealer of the cards. He can decide to place or propose a bid. Then each player can place a higher bid. For example, if the first player bids a 7 of clubs, the next player must at least outbid a 7 of diamonds. And so on and so forth. Bidding stops when three players have answered "pass". The last bid will be the one that determines the course of the game. The camp which pronounced this last bid thus becomes the declaring camp. Its objective? To make as many tricks as set in the bidding increased by six. So if the bid was awarded to "4 diamonds", the declaring side must make at least 10 tricks (4+6).

How to play after the start of the Bridge ?

After the start, each player has three chances. Either he plays a card in the same suit as the first card. This is mandatory if the player has a card in that colour. You may not give up this option Bridge . Either he cuts with a trump card (unless the bid is a trump). Finally, he has the possibility to discard by placing a card of another color than that of the lead and that of the trump.

Whose trick belongs to Bridge ?

How to win a game of Bridge ?

To win a game of Bridge , the declaring side must fulfill the contract that has been set. Otherwise, the defending side wins the points. The points are counted as follows: 20 points per trick if the bid is clover or diamonds, 30 points if the bid is hearts or spades, 40 points for the first trick in the case of a tie and 30 points for each of the following tricks in the case of a tie.

add a comment of Rules of Bridge, Learn How to Play this Card Game