How do giraffes sleep?

Author and references
How do giraffes sleep? 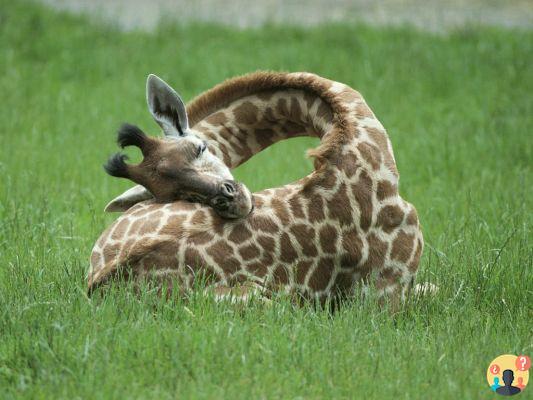 The brevity of giraffe sleep, which can take place standing or lying down, probably has to do with two fundamental factors in the life of this long-necked animal: rumination and predation. But then, how do giraffes sleep?

A study of the sleep patterns of giraffes in a zoo in the Netherlands observed three types of sleep: standing, lying and paradoxical, which is another name for rapid eye movement (REM) sleep. When sleeping upright, the giraffe is erect but motionless with its neck tilted a little more forward than when walking; the researchers speculated that it was likely a form of light napping.

In recumbent sleep, giraffes lie down with their legs bent and their necks bent. The classic pose during REM or deep sleep and the giraffe is lying with its neck arched back and its head resting on its hind legs or the ground - a position that has been compared to a sleeping swan.

Giraffe naps usually only last no more than a few minutes at a time. In zoo giraffes studied in the Netherlands, 24% of REM sleep episodes lasted less than a minute. As ruminants, giraffes spend long periods of time chewing their food, and they may occasionally doze slightly. The study suggested that giraffes picked up an average of 4,6 hours of winks per 24-hour cycle. Newborn calves can sleep more: Under observation at the Buffalo Zoological Garden in a 1978 study showed that a baby giraffe spends about a quarter of its time sleeping, mostly in an upright position. 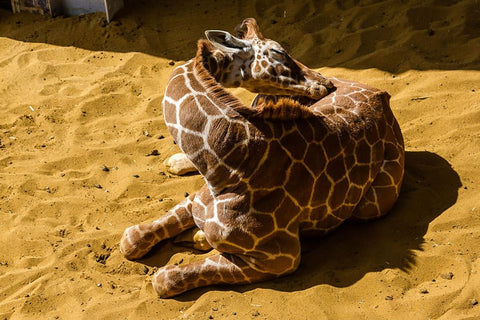 When does a giraffe sleep?

In “The Behavior Guide to African Mammals,” zoologist Richard D. Estes notes that wild giraffes typically spend part of the night lying down, alternating this rest—which peaks in the early morning—with periods of browsing or standing rumination. When the moon is bright, animals spend more time feeding and less time ruminating or lying down. Female giraffes caring for offspring have their own nightly routine: young calves are hidden, trying to stay under the radar of predators, and their mothers keep watchful in the vicinity.


Why do giraffes sleep so little?

Why do giraffes only sleep a few hours a day? Part of the reason may be to avoid predation. Overall, adult giraffes don't have to worry about predators due to their size and formidable hooves. However, lying down and getting up is an awkward and somewhat protracted process for these lanky beasts, and a lying giraffe is therefore vulnerable to lions, who are more likely in this situation to grab the animal's head and strangle it.

Promoting naps instead of hitting the hay for hours may have a lot to do with the giraffe diet. Rumination requires the giraffe to bring partially digested food from a specialized stomach chamber (the rumen) and chew it to break it down further. This rumination occupies a good part of the giraffe's day in addition to active feeding, which itself can occupy up to 75% of the herbivore's time depending on the season. Given these constraints, deep sleep becomes a peripheral, sideways activity, pursued in short periods.

How do giraffes sleep? You now know everything about giraffe sleep!

How do fish sleep? ❯