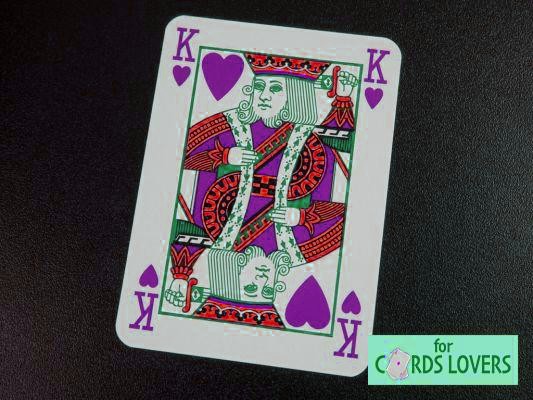 To play barbu you need:

How is a Barbu game played?

A bearded game - so called in reference to the King of Hearts - goes like this. Each player deals the cards in turn clockwise in the way he or she wishes. Either one card at a time or in sets of two or three cards. 13 cards per player must be dealt. The hierarchy of cards is as usual, from 2 to ace, with 2 being the lowest card and ace the highest. It is the player to the left of the dealer who sets the contract which is the objective of the game. There are several types of contracts.

In the "folds" contract, the goal is to pocket as few folds as possible. Each trick won causes the player to lose two points. However, if one of the players wins all the tricks, his opponents lose the number of points set by all the players (usually 40 points or more).

In this version of the bearded man, players must manage to win as few core cards as possible, from 7 to ace. Each heart won in a trick gives three penalty points to the player concerned and even six points if it is an ace. In the same way as for the "trick" contract, if a player wins all the heart cards, his opponents are penalized a minimum of 40 points.

In this contract, you must avoid pocketing the queens of all four colours. Each queen won penalizes the player by six points. Some versions of the game stipulate that whoever wins all the queens wins 20 points.

This contract, which gave its name to the game, states that the player who seized the King of Hearts is assessed a 20 point penalty.

This last contract mixes all the rules of the previous contracts. It is thus about not making tricks, not pocketing any cards in heart, neither queen nor king of hearts. The one who wins is therefore the one who totals the fewest cards of this type.
Note that if it is impossible to continue the game, a new deal is made. This case occurs when there are no more cards in the "heart" contract, when there are no more queens in the "queens" contract, or when the king of hearts falls in the "bearded" contract.

How do you win a barbu's game?

The player with the bearded beard is the one who has accumulated the most points. Depending on the contract chosen, the game can last a few minutes or several hours. It is also possible to play bearded football with six or more players. In this case, two decks of cards will be used, resulting in a doubling of points in each round. If more than one player lays down the same card, the last card laid down wins the trick.

add a comment of Rules of Barbu, How to Play this Card Game