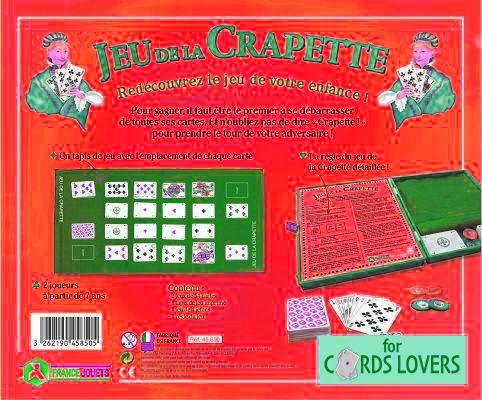 To play the Crapette, you need :

Start a game of Crapette :

Shuffle your deck of cards and cut it. You then draw the first four cards from your deck.
Then you just have to turn them over (right side up) and arrange them to your right in column.

These columns will then be used to place the cards that cannot be placed in one of the four suits (under the aces).
You have to arrange them in a decreasing way and by alternating the Color.

Then each player then lays out what is called "the Crapette"» :
To do this you must lay out 11 cards in a pile, without looking at them. Only the last one must be turned over.
This crapette must be positioned to your left.

The rest of the cards, exactly 37, are to be placed next to the Crapette. They constitute the "stock".

Aces must be placed in the center of the deck, then simply place the other cards of the same suit in descending order.

How to play a game of Crapette :

It's the player who turned over his Crapette the strongest card that starts the game.

Start by looking at the two columns of 4 cards. If he sees an ace, he places it on one of the central columns, which clears a first square.

If there is also a card of the same suit, immediately below, you can place it on the ace (i.e. the king of the same suit).
and then release another card in place of the previous one.

Similarly, if in the columns are for example a jack of hearts and a queen of spades, then the former is placed on the latter, but staggered,
which will free up a third square.

You can also place on the crapette or the opponent's Stock, a card of the same suit, immediately above or below.
When you can no longer lay out any cards, you must give priority to the cards from your stockpile.

When you have finished, it is your opponent's turn to play and so on until one of the players has no more cards left.

To summarize, the successive operations are:

The fouls to avoid when playing crapette:

How to win at the crapette:

The winner of a game of crapette is the one who first manages to place all his cards.

Audio Video Rules of Crapette ( Russian Bank), How to Play
Rules of Manille, How to Play this Game ❯

add a comment of Rules of Crapette ( Russian Bank), How to Play