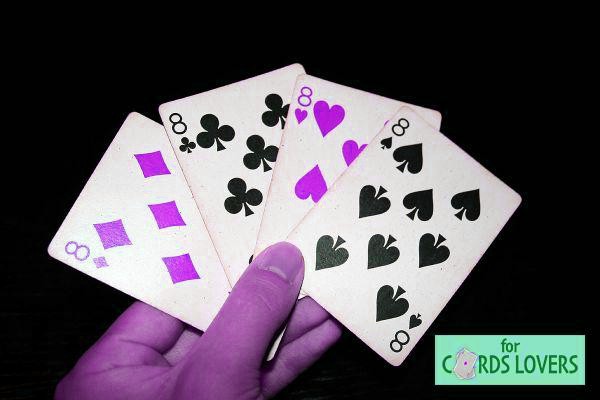 Distribution of special cards on the Crazy 8 :

Start a game of Crazy 8:

To start, a dealer deals each player 7 cards face down. The rest of the cards are used as a draw pile. Once the deal is made, the dealer turns over the first card from the deck and places it next to it. If it is a special card, another one is drawn.

The player to the left of the dealer then starts playing. He can cover the card from the deck with either a card of the same suit, value or play a special card. In case the player cannot play, he must draw a card from the deck. If it is playable, he can put it down, otherwise he passes his turn keeping the card in his deck. The player to his left can then play his turn and so on.

Example: The card is a 3 of hearts: The player can either put down any heart card, any 3 or play a special card such as an 8 for example.

When a player has only one card left in their hand, they must call out "Card" to warn the other players. If he forgets to do this and a player notices, he will have to draw 2 cards.

First player to get rid of all his cards wins. A count is then made on the cards of the remaining players.

If the draw pile is exhausted, only the first exposed card is kept and the pile is shuffled so that you can draw from it.

Counting points on the Crazy 8 :

The game ends when the first player reaches 500 points. The player with the least points wins the game.

Rules of Kemps, How to Play the Card Game

Add a comment from Rules of Crazy Eights, How to Play this Card Game

Forcardslovers was created by a group of card game enthusiasts. ForCardslovers.com is a website where we share the meaning and the interpretation of cartomancy, as well as our favourite games with the different cards that exist in the world and, moreover, you can play online the card games of the moment. Enter and discover also different magic tricks to surprise your family or friends!