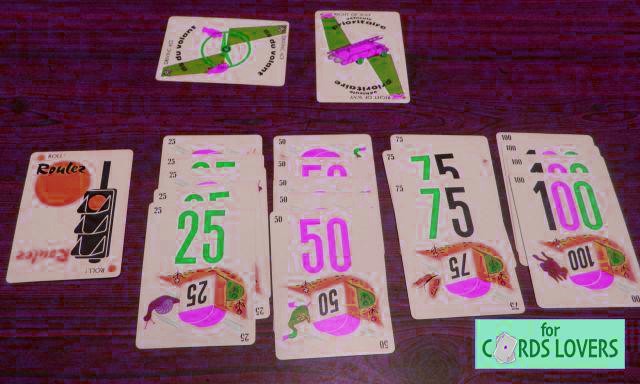 To play the Mille Bornes , you need:

They are the ones that allow you to cover your 1,000 kilometres. You must lay them on top of each other by family in order to indicate to you and your opponents how many kilometres you still have to cover.

How to play Mille Bornes :

As explained above, the goal of the Mille Bornes is to be the first player to travel precisely 1000 milles. In order to do so, you will have to avoid the traps of the road: car breakdowns, traffic lights and speed limits.

To start a game, each player is dealt 6 cards that he must not show to the others. The rest of the deck will serve as a draw pile. To start the game, the first player must draw a card. If he has a green light, he places this card in front of him and can start the game. The player may also place a "Boot" card or a "Speed Limit" card in front of one of his opponents. If the player cannot or does not wish to put a card down, he must discard one in order to always have 6 cards in his hand.

Then it's the next player's turn to play. He too has several possibilities. In addition to those listed above, he can counter an attack by placing the opposite of it on top of it to cancel it. Example: He places an "end of speed limit" card on a "speed limit" card.

Alternatively, the player can also attack the player who has set a green light by placing a red light card.

The winner of the game is the one who managed to put exactly 1000 kilometres in front of him using the distance cards.

When an opponent attacks you and you have the corresponding boot in your hand to parry the attack, you have to shout "You're out of the game! "even if it's not your turn. This will give you an extra 300 kilometres. In addition, you can play again immediately after you draw a card.

Rules of Solitaire, How to Play the Card Game

add a comment from Rules of Mille Bornes, Card Game, How to Play

96%
We have been able to provide in 96% of times, the solutions that users were looking for when consulting our page.