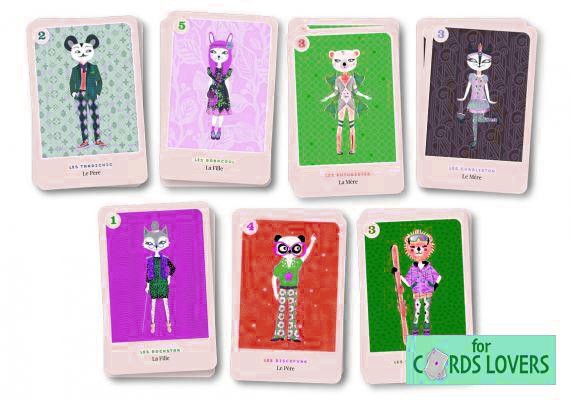 To play the 7 Families game, you need:

A family classically consists of 6 members:

Start a game of 7 Families :

First, one of the players deals 7 cards to all participants. The rest of the cards act as a draw pile. To start a game, the first player asks the person of his choice if he has the card he wants (example: In the Dupont family, I would like the father). If the questioned player has this card, he must give the card to the player who asked the question. If he does not have the card, the first player must draw a card.

If the player draws the desired card during the draw, he must say out loud "Good draw! "and can play again by asking one of the players for another card. If he does not draw the desired card, he passes his turn and it is the player to his left to ask for a card of his choice.

Watch out! A player can only request a card from a family if he already has one in his deck.

If a player has a whole family (all 6 cards), he puts the family in front of him and the game continues until there are no more cards to draw. Then all that remains is to count how many complete families each player has.

How to win a game of the 7 Families :

The winner is the one who at the end of the game has the most families ahead of him.

Audio Video Seven Families (Happy Families) Rules, How to Play
Forcardslovers was created by a group of card game enthusiasts. ForCardslovers.com is a website where we share the meaning and the interpretation of cartomancy, as well as our favourite games with the different cards that exist in the world and, moreover, you can play online the card games of the moment. Enter and discover also different magic tricks to surprise your family or friends!
How to Play to Play The Card Game President, Rules ❯

Add a comment from Seven Families (Happy Families) Rules, How to Play