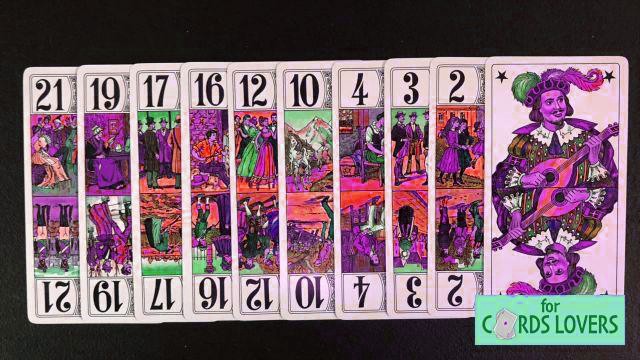 To play Tarot, you need:

A tarot deck is composed of 56 cards with a value from Ace to King like a traditional game (clubs, hearts, diamonds, spades). The special feature is that there is an additional card "The Knight" between the jack and the queen.

Assets There are 21 cards (from 1 to 21). They allow the player to cut any suit to win the trick, knowing that their value corresponds to their number.

The last card is The Excuse and works a bit like a wild card. It has a great value for the end-game countdown but does not allow you to win a trick.

The goal of the tarot game :

The principle of the tarot deck is based on the bet to achieve a certain number of points for the player who takes. For this he can be helped by the Oudlers. The more the player who took the bet has at the end of the game, the less points he will have to make to succeed in his bet.

The oudlers are three:

To begin, the game is spread out on the mat face down and each player draws a card. The player with the lowest card is designated to deal.

He then deals each player the cards 3 by 3. The dealer must also make " The dog A "card" is a "card" consisting of 6 cards that he must put down card by card without it being the first and last card dealt.

Each player then turns over his cards without ranking them and the player to the left of the dealer announces if he takes. If the answer is no, it is up to the next player to speak. A player may bump another player by taking a higher bet.

When one of the players decides to take, he has to bet his victory by taking more or less risks according to the level of betting chosen. Namely, all bets are worth 25 points automatically.

If no one decides to take, the dealer then deals the cards again.

The course of the game:

At the end of the betting of one of the players, the dog composed of 6 cards is then returned to the sight of all (in the case of a small or a guard) and given to the declarer. The latter chooses 6 cards of his choice (except the king and the oudlers) and puts them back in front of him without showing them. The 3 other players then form for the whole duration of this game a team which must try to prevent the taker from succeeding in his bet.

It is always the player to the left of the dealer who starts the game. He plays a suit and the other players have the obligation to provide the requested suit if of course they have the cards. If they don't have any, they can cut at trumps. The winner of the trick is the one who opens the next round.

Concerning trumps, players have the obligation to move up to trump, i.e. to play a trump card higher than the one previously played. If a player no longer has any trumps or cards of the requested suit, he may put down any card from his deck.

The excuse is always kept by the player who has it. The player cannot win the trick since it has no direct value when it is played. The player must then when the turn is over give a worthless card that he chooses in exchange in the previous tricks to complete the trick. The excuse cannot be played on the last trick or it will be lost.

How to count the points in Tarot?

For each game the total of the taker's and team's folds are counted separately. The total must always give 91 points.

To count cards, always join a low card with a dressed card.

Now let's see the value of the cards:

The taker to win must therefore choose according to the number of Oudlers he owns :

If the taker's bet is successful, he immediately takes 25 points + the number of points made in addition to his bet.

Example: The taker has taken a guard and has to make 36 points. His total of points amounts to 41 points. The result is therefore 30 points (25 points + 5 points). Having taken a guard the total is multiplied by 2. So the result is 60 points.

Thus, at the end of the round, the total score of the players must always be equal to 0.

The little one at the end

If the little is brought until the last round without being lost, it brings 10 more points to the team or the taker who wins it and is multiplied according to the chosen bid.

To achieve a grand slam, you have to win every trick. It can be announced after the taker has looked at the dog. In this case, it is the taker who starts the game and can win the last trick with the excuse.

Some players have incorporated this rule into the Tarot deck. The difference with the grand slam is that the petit slam is achieved if the declarer leaves only one trick for his opponents.

Rules of Solitaire, How to Play the Card Game

add a comment from Rules of Tarot, How to Play, Card Points, Special Moves