All the Meanings of the 8 of Wands Tarot Card: 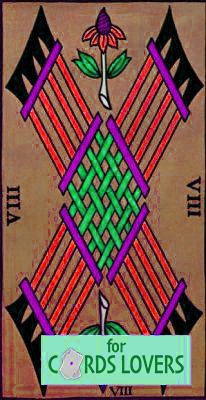 The 8 of Wands is a revolving card. The number eight is important. It is represented by the card of Justice. We may notice significant differences in the sequences concerning this number in particular.

Some details about the eight of Tarot cards

In the minor arcana, we find this notion of eight, either in a receptive way through the cups and the last ones or as active symbols through the swords and Wands.

Between these four suites of the Tarot's minor arcana with the number eight, there is a clear difference. Indeed, the series of cuts and the series of deniers are full while the others seem empty in terms of energy. These notions are important since they allow us to return to the idea of perfection conveyed by the Tarot Justice card.

Key words attached to the eight of Wands Tarot card

Description of the Tarot Blade 8 of Wands

The eight of Wands and a map practically devoid of vegetation. Only two small, vertical, cut flowers remain.

In fact, it's as if all the creative force, all the energy was concentrated in it. We end up with an idea of concentrated energy ready to blossom. An energy that wants to give the best of itself.


We thus pass from dispersion to concentration. It is the fact of knowing how to channel one's energy on a precise point, without distraction and in the creative act.

So the eight of Wands can give the idea of creating something perfect in our opinion. The eight of clubs contains the vital energy for spiritual service.

The meanings of the card of 8 of Wands upright

The 8 of Wands probably indicates that the difficulties and battles of the seven of Wands are now over. You have managed to create a space of freedom to set up your objectives.

The eight of Wands is a card containing a significant amount of energy. An energy turned towards action. It propels you at high speed towards your goals and everything you care about. Certainly it may require work. The card asks you for involvement or commitment but all this is very positive. You have an enthusiastic state of mind. Progress is pointing its nose, grab it and let the wind push you along.

This card represents the idea that one can have when one feels connected to the universe.

The eight of Tarot Wands also represents the ability to be able to focus totally on a goal. You have left out any distractions. Your eyes are focused on what you want to achieve.

The 8 of Wands asks you to vibrate with the Universe...

The card is also a way to sublimate the energy that exists in you to make it reach for one and only one goal. The eight of Wands could make you think of a kind of energy vortex into which you rush. This vortex allows you to go exactly where you want to go. It gives you the focus, determination and will to get there. What you are doing today is productive. It allows you to accomplish your wishes in a very short time. With this Tarot card, you can finally have a clear vision of the future. But most of all, you can see your entire project and the possibility of realizing it in the short term. The 8 of clubs also implies that you feel very excited and enthusiastic in the process. You know that nothing and no one can now stop you in your movement because you are pure energy.
This map is therefore a realization map. It is therefore important to make sure that your goals are in line with your inner being in order to maximize this energy. In other words, you are truly aligned.

The card of the 8 of Wands in a play

Very often, the Eight of Wands may also suggest travel. Since it is a movement card, it may speak of travel. Just as the Wheel of Fortune card or the Wagon card would do. Here, since the air element is the one that is highlighted, it could refer to transportation by air. The card's advice is not to give up. You're close. You will reach it if you persevere.

The meanings of the 8 of Wands card reversed

The 8 of Wands, reversed, may show a form of precipitation. In this case, you risk for lack of reflection. Beware of bad decisions!

This card, while it shows that it's the right time for you (and that you have the energy to move forward), also shows that it's important to be aware of all your skills and resources and use them to best advantage. This means making a clear distinction between being fast and being in a rush.

The eight of Wands, upside down, can also express delays. Especially when travelling or setting up your projects. Even if you are overflowing with energy and enthusiasm, there are currently many obstacles that slow you down. Of course, you will feel frustrated by this because you are ready to take action. The card's advice then is to look for alternatives or other paths to get around these obstacles.

The eight of Wands, upside down, may also suggest you're going too fast. That you're rushing ahead without seeing or thinking. The advice then will be to take the time to re-analyze your goals. To review your actions so that you understand what you are forgetting in your rush. So the advice on the upside-down eight card from Wands upside down is to be careful not to act in haste. This could lead you to make mistakes.
In a very positive way, the 8 of Wands, upside down, may ask you to take a break. You must wait for the right moment to get back into action.

The eight of Wands upside down, can also show that you have too many ideas at once. You need to sort it out. Focus on one idea at a time. Don't try to do it all at once. Again, the advice is to avoid dispersion. You need to really focus on one thing and concentrate all your energy on it.

Summary of the 8 of Wands Tarot Card

The 8 of Wands is a card featuring power and energy. You are now connected to the energy of the universe. It is up to you to use it profitably. If you have channeled it, everything will work for you.

You play the 8 of Wands card thinking of one person in particular...

In the professional field :

In the sentimental area:

This person will be full of enthusiasm. He or she will offer to build a relationship with you on a solid foundation. He or she will be a person bursting with energy. Very communicative, he will seduce you and take you along in his whirlwind.

This person will be positive. The financial field is also favourable to the batting eights. You will be able to entrust your finances to her and she will manage them brilliantly.

The Message of the 8 of Wands onTarot

Go, the force is with you!