Keywords attached to the 7 of Wands Tarot card

The 7 Wands of the card Upright: wrestling, competition, difficulties

The 7 Wands of the card reversed: overwhelmed, harassed, persecuted

Some details about the seven on the Tarot cards

Minor cards with the number 7 are generally high-powered. This time it is a question of defining oneself in relation to the world. These arcanas will remind it of the Tarot deck card which itself carries the number seven. For the Chariot card, a card very strong in energy, this one comes from the earth which literally carries the chariot.

It is in a way a manifestation of the law of the universe. The 7s of the tarot in the minor arcana of the Tarot carry this purifying and germinal action, acting by presenting us different facets of it through the four suites of the tarot (cups, deniers, wands and swords).

Description of the 7 of Wands Tarot card 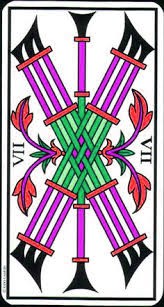 The seven of wands of the Tarot is a card bursting with energy and color. It forms a diamond in which the wands intersect, forming a checkerboard in their center.

In the centre at the joints the colour yellow appears.

Thus from action (colour red) and thanks to divine reflection and action (colour yellow) the raw fire is transformed into an opening to the world. In creative energy.

The Meaning of the Tarot Card upright

The  seven of wands card is very similar to the  six of wands card in that it depicts a battle. In both of these cards, it is a matter of saving one's positions. Thus, these Tarot cards that belong to the series of wands depict a situation in which one has acquired a certain number of things (advantages) that must now be protected.


In the case of the seven of wands, after having obtained a position, it is a question of keeping that position. You must protect yourself from outside attacks. This way you will understand that it is a question of maintaining your position despite the competition. Or because of a very tough competition. Attacks from people who are jealous and want to take your place or your advantage.
This card has the aspect that you have acquired of things that have been recognized in a public way but which because of this are now coveted by other people.

The 7 of wands, a professional card

This card will mostly talk about professional or financial life or the battles that one is sometimes led to fight to be recognized within a group for example.

In a broader sense, the seven of wands may indicate that you are now facing challenges in order to maintain your position. These challenges or obstacles are there to test you on certain intrinsic qualities such as self-confidence, perseverance, competitive spirit, etc....

The advice of the seven of wands is to keep your positions and to show authority.

This card will encourage you to stay and defend yourself at all costs. It is a card of courage and perseverance that asks you to concentrate your forces on what is important to you, that is to say on what you have just acquired.

So in this card, you are a warrior and you must fight to the end.

Conquests and victories at all costs

The Tarot seven of wands card is also an encouragement card in the sense that it tells you that whatever the battle, whatever the obstacles or opposition, you will win if you don't give up.


So it also carries with it the idea of accepting the idea of fighting to get to the end. But in this battle, of course, there will be casualties. So it's about fighting without compromise, without negotiation, and fiercely holding on to what you've won. In another aspect, this card could show that you have to speak in public or in any case to perform in public and that you will have to defend your ideas. You will therefore have to be prepared to have an excellent argument or prepare yourself for attacks. One could imagine here for example a researcher presenting his discovery... The bottom of the Tarot card will always contain a notion of struggle and battle.

The meanings of the 7 of Wands Tarot card reversed:

The card of the seven of wands will indicate that you feel attacked from all sides. You find yourself overwhelmed by the challenges imposed upon you. From then on, it is difficult for you to cope with all your responsibilities. You are no longer able to continually fight to succeed in imposing yourself. You feel that it is a never-ending task and you lose hope.

The reversed card of the seven of wands will rather be the expression of your inner feeling about the situation.

You may also have made commitments and now you can no longer keep them because of all the difficulties that continually arise and against which you have to fight all the time.
The seven of wands will also show that it is possible that you may find yourself in a very competitive job, for example. For example, sales and that you are continually challenged. It becomes heavy and exhausting for you and you can no longer cope.


The loss of fighting energy

You may also feel vulnerable and losing the energy and strength to continue to struggle.
This map may also highlight a lack of trust and the need to work on the trust and esteem you have for yourself in order to regain the courage to continue your task.
The reversed seven of wands of the tarot may also speak of external attack in the form of criticism and judgments (which may not necessarily be directed at you) but which you will perceive internally as such.

Perhaps you are disappointed with what you have and can no longer full fill yourself.

Fear of conflict and avoidance

This card may also show a completely different issue, which is a form of attitude in which you are trying to avoid conflict and that the result is the opposite. Perhaps you wish to avoid challenges and opposition by accepting too much or by wanting to compromise too much. You then find yourself under constant attack from all sides. The result is that you are forced to fight continuously while your desire is the complete opposite. The advice of the tarot card here would be to assert yourself and regain self-confidence in order to establish what is important to you and to show what your territory is.
The upside down seven of wands may also indicate that you have lost all hope and no longer see the point of fighting. In another register, the upside-down seven of clubs pushed to its extreme may show inappropriate aggression because you overreact to attacks. You are continually feeling attacked and reacting accordingly.

Summary of the 7 of Wands Tarot Card

The seven of wands upside down is a battle map whatever form you want to give it, the battle will be internal or external. But this map is essentially about self-esteem and the ability to know how to defend what is important to us with perseverance.

You play the 7 of Wands card thinking of one person in particular...

The professional field is difficult here. You end up with a person who is attacked by colleagues or who is jealous and has to spend a lot of energy fighting rather than working. This is a person who is often very jealous.

In the sentimental area:

This person is unable to maintain the relationship and is continually confronted with arguments, perhaps because he or she refuses to accept the conflict, or is unable to fight off attacks from outside the couple. It may also be a person in divorce proceedings who has to fight to maintain his or her rights.

This person, although effective and positive, spends his or her time fighting against everything. This is not the best way to manage money.

The message of the 7 of Wands

Keep what you have acquired against all odds.