Meaning of Card The King of Swords in Tarot

Author and references
Meaning of the King of Swords

The king of swords appears severe and austere. The swords recall the air element for the Tarot. They are the symbol of thought and action. The King of Swords is the highest level in the suite of swords. He has acquired all the masters and rules the world through thought. To find out how the King of Swords establishes his reign, discover the meanings of the card below.

Keywords attached to the King of Swords card

The king of swords of the tarot deck right side up... : cerebral, powerful, bossy

Description of the King of Swords

The king of swords card is part of the minor arcane dress code. 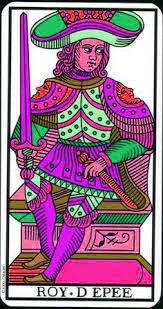 The map shows a rather young man sitting on a throne against which he is leaning but with no backrest.

His gaze seems to be wrathful and he looks to the right, thus turning his gaze away from the sword he is holding upright. The shoulder pads they are wearing are the same as the ones on the Chariot, making it look like one of the features of the Chariot.

He seems to be in a position of command holding his sword straight and a scepter in the other. His tunic is sky blue, suggesting a strong receptivity and desire for spiritual understanding. The king of swords is the culmination of the use of the brain sphere.


The King of Swords as the highest card of the dressed cards represents total mastery of the sphere of intellectual power and authority.

Through his abilities, he gets everything he wants. This Tarot King is focused on authority and power, which is the most important thing to him just as for the Denarius King, money was the most important thing. The king of swords likes to judge, command, direct. He is a born leader, so he will be a commander, a business leader in any case someone who will have people under his command and who will like to lead others.

The King of Swords loves a challenge. He likes strong emotions and being able to win battles. This makes him gray. He therefore seeks confrontation and difficulty.

The King of Swords is an objective, cold character who knows how to analyze situations clearly and goes straight to the facts. He uses his intellect with dexterity and always succeeds in what he undertakes. Failure is not an option. He makes good use of all the qualities of the intellect such as analysis, diplomacy, laws, etc., and he is a good judge of the quality of his work.

Learning from the King of Swords

The King of Swords will also suggest if you draw this card in a tarot deck that you need to be more forgiving. Of course, you must have a clear mind and a good perception of what is right, but you must also try to be objective about the situation you are experiencing.


If you draw the king of swords it will also show that in relation to a situation you are in a very good position to move forward and win. For example, in a negotiation, you are in a position of strength. But on the other hand, it will be important to put emotions aside to remain as rational and objective as possible.

The qualities of the King of Swords

The king of swords as well as the sword queen is a very assertive and direct character who knows how to say what he thinks through his observation. He is not a very sympathetic or empathetic character.

As a person, the king of swords will very often represent a lawyer, a financial advisor or a tax inspector... In any case, he will represent people who have certain responsibilities but who do not need feelings or emotions in their job. He will also be able to find himself in professions where it is necessary to have good knowledge and use his intellect essentially. He will be impartial and fair and will apply the rules coldly. The king of the sword in the right place has undeniable qualities. He is a loyal, extremely correct person who cannot be corrupted. He is a fair and impartial person. He could be an excellent judge, for example. Of course he will expect the same behaviour from others and will ensure that it is so. This will make him a hard and difficult character because of his lack of flexibility and tolerance.


The King of Swords is a card of mastery and rules.

The King of Swords card is drawn upside down:

When the king of swordsis drawn upside down, you will find yourself facing a person who is unable to use his or her intellectual abilities to the best of his or her ability. In this case, that it will be a manipulative person who will try to persuade others using unclear methods and despotic ends.

The King of Swords may become a boaster. A person who needs to make himself look good at all costs. He'll be reminiscent of the way a swordsman behaves when he's upside down. He will also be someone who is extremely critical, even hurtful at times and cutting in his remarks.

If you meet a king of sword you will quickly realize because he will appear intelligent and charming to you. These are his first assets. Then you will realize that his finesse of mind also allows him to wound skillfully. If the card is upside down, it will be at that moment, someone interested and who will act only through that.

On the other hand, an upside down king of swords could represent a person lacking decision, rather indecisive, not knowing how to take opportunities or having completely lost his direction. Someone who cannot make up his mind to make up his mind. He will then have the opposite of the qualities of the king of swords in the right side.

The King of Swords upside down can be the exact opposite of the King of Swords on the right side. He will be a critical person totally lost, not knowing what decision to make. Someone who can't get down to work and becomes lazy and bitter.

The upside-down king of swords could also be a tyrant, a despotic character. He might even be aggressive or prone to violent anger, especially if he finds himself challenged in his authority.

The King of Swords will represent the intellectual domain and clarity of mind. It will be the ability to make decisions.

You draw the card of the King of Swords by thinking of one person in particular:

The King of Swords's message

It is necessary to know how to be assertive

All the Meanings of the Tarot 6 of Swords

Meaning of the 8 of Swords on the Tarot