5 of Wands, All the Tarot Card Meanings

The 5 of Wands is a card of conflict and struggle. It shows the power of emotions and the impulse to quarrel that often animates us. In general, this minor Tarot card is interpreted as a conflict card. However, with the Tarot, everything is a matter of point of view. To understand how to interpret the Tarot 5 of Tarot Wands, read the explanations below.

Key Words Attached to the 5 of Wands Tarot Card

The 5 of Wands of the Tarot reversed: internal conflict, challenges, refusal of conflict 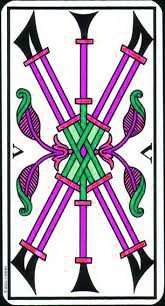 Description of the 5 of Tarot Wands card

The 5 of Wands is part of the Tarot's minor arcana. It presents 4 Wands that intertwine. From the center are born the leaves that blossom in both directions.

When we take the card in our hands, we can see that the sheets presented on the reverse side, go upwards, the divine as well as downwards the material. However, this explosion seems to know limits and to turn only on itself, the leaves being turned over on themselves.

The meanings of the 5 of Wands upright

The Tarot 5 of Wands card is a card that carries a strong emotion of quarrel and anger. As with all cards in the Tarot deck, it will essentially speak of the energy that animates men.

The five of Wands seems to indicate a situation where there is strong discord. This Tarot card indicates that you are caught in the middle of a battle, you find yourself in competition with others and this prevents you from reaching your goal.


It is not possible for you to rally others to your goal/cause. You cannot find a common goal, even in a form of compromise. The only solution is to live this competition and make the most of it.

You get the impression that in this card, no one can be heard. Everyone is caught up in their own emotions and concentrated in their own story. It's as if the others are deaf to your arguments.

The resolution of the card would be to stop and listen. To take the time to see and listen.

The solution lies in compromise and finding an agreement.

The need to listen

The five of wands is not negative in itself. It shows the need to listen. Especially to take into account the opposing points of view. To listen to those with whom we do not agree. It is a great challenge to accept not to respond immediately. But to listen first without judgment before speaking. In this way, we will be able to open ourselves to other points of view. From these points of view, new ideas can emerge that we would not have had if we had rejected everything.

Thus, the 5 of wands encourages diversity. Everyone must be heard. That's how you get the most out of everyone's input. This card can be understood in a broader sense, asking to be open to the acceptance of difference and of others.

Accepting the difference in others

The 5 of Wands card is part of the 5 series. The 5 is a transformation number. It requires the ability to adapt and overcome the obstacles and conflicts of change.


Cards marked with the number 5 without cards announcing a transformation...

This card, like the 5 of deniers, the 5 of cups and 5 of swords, is a transition card almost of transformation (depending on the stage of maturation). Things are bound to change whether you like it or not. You might as well see things in a positive and constructive way.

The card from an energy point of view

The card could also represent you as a person, who you are. From this perspective, your parties are in conflict. Your internal energy is mismanaged or has a tendency to disperse. Let's say you are unable to direct your internal energy and lead it in the right direction. To get out of this impasse, you need to come together, make peace with yourself and better understand where your internal conflicts lie.

The first message of the 5 of Wands - the emotional aspect:

If you pull the 5 of the stick, it indicates that it is now time to better manage your emotions. You may have a tendency to start from what you consider to be the truth without listening to others. Therefore, any opinion that does not agree with you will be rejected. You may find yourself in conflict frequently if you are not willing to open up more to what others can bring to you.

The Meanings of the Reversed Tarot Card

The upside down five of Wands may indicate that you are experiencing internal conflict. You can't see clearly inside yourself.


The upside down 5 of Wands may appear in a Tarot deck when you are faced with important questions. For example, you need to make a decision about your relationship. You ask the opinion of the others and each one has a different opinion to bring to you. But instead of helping you, they create a real cacophony that becomes conflictual.

The others then try to impose their vision of the situation on you, not letting you decide for yourself. If you try to make your point, it will be contested and you will have to fight to impose your point of view.

The 5 of Wands shows here the difficulty of making yourself heard and of making order around you.

Conversely, the 5 of Wands upside down may show that you are afraid to get involved in a conflict. For fear of the conflict and its consequences, you remain in a state of passivity.

You don't feel good about having to face others. But the difficulty is that it creates tension within you because you are forced to accept situations that do not suit you.

It is important in these cases to understand the need for conflict. You must learn to sit down. Once you've managed to take your place, you'll feel relieved and won't have to fight again to assert who you are.

Summary of the 5 of Wands Tarot Card

The card also shows our inability to hear what others can say. This card requires us to assert ourselves while knowing how to listen to others. It is also a question of knowing how to take one's place so as not to be stepped on.

You play the 5 of Wands card by thinking of one person in particular.

You will find yourself in a conflicting professional world. You will have to learn to impose yourself. But in conflict, you will also have to know how to listen to others in order to work as a team and not make your work a living hell.

It is difficult to build a romantic relationship in conflict. Here we are talking about a person who has difficulty accepting other points of view than his or her own. Therefore, if you always agree, everything will be fine. On the other hand, if you disagree, you will find yourself in conflict with the person.

This person is mainly focused on measuring yourself against others. At the same time, it is difficult for him/her to accept and hear what others have to say. It can be difficult under these conditions to get along with this type of person in any field.

The Message of the 5 of Wands

You have to learn to listen to others

Audio Video 5 of Wands, All the Tarot Card Meanings

add a comment from 5 of Wands, All the Tarot Card Meanings

97%
We have been able to provide in 97% of times, the solutions that users were looking for when consulting our page.