Meaning of the 7 of Swords of the Tarot

Meaning of the 7 of Swords of the Tarot: 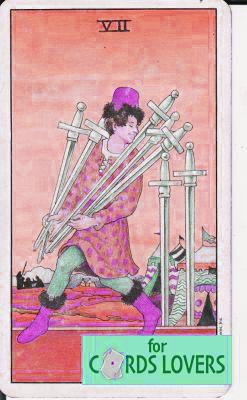 The card of the Seven of Tarot Swords is mostly a disappointment card. It also refers to a form of betrayal in the sense that the subject is obliged to find a solution to get out of it.

The 7 of Swords card highlights actions that are hidden or may not be seen. It is therefore all that is not said, not seen in the open. This tarot card therefore asks you if you take it out to be careful because there are things you don't see or people acting behind your back. This card refers strongly to the problem of the sword sequence, namely the intention, the thought and the actions that flow from it.

If you yourself are obliged to do so due to circumstances, it is necessary to be responsible and aware of the consequences of your actions.

The 7 of Swords, a card of feeling

Ask yourself if you tend to run away from responsibilities, commitments ... Maybe you also can not take things head-on because they seem too difficult. The 7 of Swords tarot speaks of wanting to escape a situation rather than facing it.


Ask yourself what you gain by escaping. Does it solve the situation or does it just delay things?

Know how to observe before acting

Furthermore, the 7 of Tarot Swords asks you to be careful whether you are the victim of a betrayal or whether you are trying to escape from a situation. Indeed, you must avoid stirring up emotions or feelings of deceit, deception, anger or betrayal. For example, imagine that you have trusted someone and that person has betrayed you. You must therefore be careful about who you trust.

The 7 of Swords may also show the desire to get out on his own without calling on others. It will then show an intense internal mental activity and a desire for independence. Trusting only yourself and your own resources.

The meanings of the 7 of Swords in Reverse Tarot.

The card of the seven of Swords upside down will rather represent the internal experience of a situation. It will then be a challenge that one can give oneself in front of a situation. The upside down card will show that you have to get out of a situation but that you are facing difficulties. These difficulties may be more of an internal feeling than a reality. However, this feeling will push you to use particular strategies to get out of the situation. In order to get out of it, you must free yourself from your mental processes in order to overcome the blockages that prevent you from reasoning otherwise. This card reminds us of one of the meanings of the Reverse Judgment card where it is necessary to question yourself and to overcome your limitations and beliefs in order to move forward.


It is important here to learn to think differently in order to get out of the limits you have built up.

Summary of the 7 of Swords Tarot Card

The Seven of Swords talks about internal feelings about a situation. It also talks about the difficulty of facing up to one's responsibilities and therefore the propensity to use techniques to take the tangent or flee from a situation. It could also be about betrayal.

You draw the 7 of Swords card thinking of one person in particular...

The professional field here is very difficult. You can hardly trust this person who is not frank. They may mislead you or act against you behind your back. If they are someone you work with, they will stop you working with them.

This person will have a propensity to be less than forthright. You will not know what he or she is thinking. He will never take any situation head-on and will always find a way to dodge. It is also possible that this person may also deceive you. As for the situation in general, they may make you believe things that are not true or they may disappear without warning.


In the financial field:

You can't trust this person in financial matters.

The message of the 7 of Swords Tarot

Learn how to face your responsibilities

On the 7 of Swords of the Tarot in the place : betrayal, disappointment, theft

The 7 of Swords of the Tarot upside down: escape, challenge, puzzle

Description of the 7 of Swords Tarot

The Seven of Swords is one of the minor arcana of the Tarot. This card is marked by the presence of the sword in its center. This one is surrounded by 3 ovals on each side which meet at the top of the card with the sword. This oval, which recalls the oval of the World, symbolizes the space given to thought. At the same time, this space is enclosed and shows an important internal reflection that only very partially manages to act on the outside. Here, the card shows the difficulties to take frank action. It is rather a question of getting around it.

All the Meanings of the Tarot 6 of Swords

Meaning of the 8 of Swords on the Tarot