Meaning of the King of Pentacles on the Tarot

Meaning of the King of Pentacles:

Description of the king of Pentacles 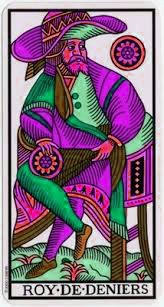 The king of Pentacles cardis part of the minor arcane dress code.

The Tarot's Pentacles King card depicts a mature character as evidenced by his beard, also reminiscent of the beard of the cup king.

It will also represent high ambition, as can be seen from the two pentacles on the card. One in his hand and the other in front of him floating in the air and which he seems to be staring at. He is leaning against a throne that seems to have almost the same shape as the Queen of Pentacles.

The ground is pale blue in colour showing a strong receptivity just like some of his clothes and hat. The green side represents fertility and wealth.

Our King also representsi the highest degree of material success. The two pentacles present on the map symbolize his influence on the material world.

His gaze is turned towards the highest Pentacles which is in suspension and seems to symbolize the direction of his mind and his determination. The Tarot de Marseille Pentacles King only thinks about money and how to earn it.

The King of Pentacles is undoubtedly the most serious of all the kings of the Tarot de Marseille and in any case the one who is most interested in the economic security. He's a successful character in his life and he likes to show it.

The meanings of the King of Pentacles card at the place

The Tarot Pentacles King right-side up represents abundance, security, ambition, discipline, and control over all the material aspects of life. It is the counterpart of the queen of pentacles but having reached a higher level in his financial development.

The king of pentacles will represent, as in all kings, suites dressed in a father figure and having acquired a certain authority. In this, the king of Pentacles is benevolent just like the king of cup for example.

Here, he represents a father who has ensured the material security of his family. A person who shows his love for those who are close to him by providing them with wealth and practical things.

The king of pentacles loves money. It's his favorite field. His only field. He's very good at finance. In fact, it's all he thinks about and he's really focused on it. His world is built around the financial and material aspects of life. And this is how he ensures his influence and prosperity. The king of pentacles is the highest degree of success and achievement in income, property and money. It represents the consecration of the work undertaken by the jack of pentacles and the knight of pentacles.

It will thus represent success in all financial or investment fields, but always with very high revenues.

The King of Pentacles in a draw

In a raffle, it can thus symbolize financial success or interesting income. 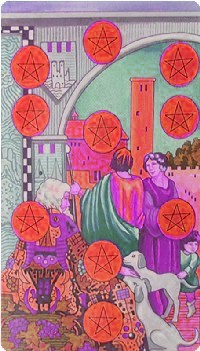 Found in the 10 Pentacles card in the Rider Waite Tarot.

The king of pentacles is only interested in business. He likes to work hard, is methodical and conscientious. Of course, he knows how to be generous with those he loves, but what interests him most is to earn a lot of money.

Thus, as a trait of character, he will not be very affectionate but will be a responsible person. He will also have an excellent feeling for business and will know how to transform all the activities he touches or takes over into excellent income. So he is an excellent manager. As far as family life is concerned, he will want to provide financial security for his family and will show his affection through this.

If you draw the king of pentacles in a tarot deck, it will mean that if you have a project, it will have to be carried out from methodical manner Using the planning and the reflection to ensure your success.

The personality of the King of Pentacles

A fortiori the king of pentacles does not really have a talent for everything that is the emotional sphere. He is rather routine and likes to work. For him, work and hard work is important. For them the rest, it doesn't matter much to him. He will therefore be the opposite of the king of cups whose approach is totally different from the king of pentacles who is a character using logic and mind. He will calculate the interest of his actions and measure the risks.


So it will be a character pragmatic...who will only be interested in the practical side of life. Somebody who's not too complicated to count.

However, the king of pentacles has an extraordinary asset, which is his ability to adapt when it comes to conducting business.Finally, if you draw a king of pentacles, the Tarot may give you the advice that it is sometimes necessary not to concentrate totally on the practical or financial aspect of life or on hard work and that you should also know how to take pleasure in what you are doing. Do not work all your life just to pass on your assets to your children for example.

The king of pentacles is also a generous character who will be spent lavishly on what he loves.

The king of pentacles asks you to consider the practical side of life...

The King of Pentacles card is drawn upside down:

When the king of pentacles is drawn upside down, it will be just the opposite of his qualities.

He will then be materialistic, interested. But it may also be too centered especially what is material, even more so than when the king of pentacles card is drawn right side up.

He will therefore be a person who may overindulge in food, alcohol or other pleasures.

As a type of character, the upside-down king of Pentacles may symbolize a stubborn and rigid character. It can also be intolerant and even infuriating. He may be possessive and jealous.

The king of upside down pentacles will be a man too focused on money who will be capable of anything to get it. The end for him will then justify the means and he may almost become dangerous in his quest for authority and power through money.

It will also be someone ostentatious who will want to impress others and brag.

A difficult person to bear

On the other hand, the upside-down king of pentacles may not be able to find the balance of things. He may be too busy with his work, neglecting his family, or he may be backwards and unable to get involved professionally and provide for his family's welfare. He will also be a financially irresponsible or spendthrift person.

The upside-down king of pentacles could be a rigid, asphyxiating person. Someone who will not wish to commit to anything. A person who is insecure and unreliable.

In an emotional or sentimental relationship, the upside-down king of pentacles can be difficult to live with. He will tend to abuse his authority and power. Or he will be hyper-controlling. He may be rigid and inflexible, communication with him may be difficult, and he may be unable to show affection.

Summary of the king of pentacles Card

The King of Pentacles and a character essentially money-oriented. This is his field of predilection and in which he excels. He is a pragmatic character and it is difficult to ask him for anything else besides that.

You draw the King's Pentacles card thinking of one person in particular:

The message of the king of pentacles

The most important thing in life is financial security...