Meaning of The King of Hearts

The King of Hearts 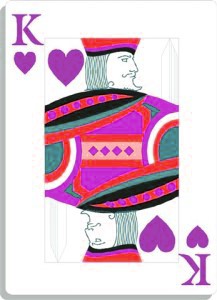 Upright: This card represents a blond, chestnut man or a widower with a good profession, a faithful and devoted friend. It suggests success in love as well as in finances.

Reversed: Positive omen but difficulties, obstacles to success. There are threats of injustice and malevolence.

If that card has to its right:

THE ACE OF CLUBS:
The consultant is getting married or having a union with a large dowry.

THE KING OF CLUBS:
Unexpected and important success.

THE QUEEN OF CLUBS:
The consultant will have the important protection of a man in a good position.

THE JACK OF CLUBS:
Sincere love from a man with a good financial situation.

THE TEN OF CLUBS:
Unexpected luck that will bring great joy.

THE NINE OF CLUBS:
Marriage or love union.

THE EIGHT OF CLUBS:
Love encounter.

THE SEVEN OF CLUBS:
Sincere love.

THE ACE OF HEARTS:
The consultant will soon be meeting his loved one.
THE LADY AT HEART:
Affair, passionate love.

THE JACK OF HEARTS:
Sincere friend.

THE TEN OF HEARTS:
Satisfied love.

THE NINE OF HEARTS:
Success for all sentimental projects.

THE EIGHT OF HEARTS:
Conquest in love.


THE SEVEN OF HEARTS:
A blond or light brown man thinks of the consultant.

THE ACE OF DIAMONDS:
News from a sincere and devoted friend.

THE KING OF DIAMONDS:
Cost-effective and interesting travel.


THE QUEEN OF DIAMONDS:
Pleasant ride.

THE JACK OF DIAMONDS:
A new one will lead to a sentimental success.

THE TEN OF DIAMONDS:
Enterprise, an approach that will succeed.

THE NINE OF DIAMONDS:
Disgruntled husband, spouse or lover.

THE EIGHT OF DIAMONDS:
Success in a sentimental enterprise.

THE SEVEN OF DIAMONDS:
Gift.

ACE OF SPADES:
Nice surprise from a friend.

THE KING OF SPADES:
Sentimental indecision.

THE QUEEN OF SPADES:
Heartbreak.

THE JACK OF SPADES:
Intrigue to detach the consultant from the person he loves.

THE TEN OF SPADES:
Failure.

THE NINE OF SPADES:
Death of a close relative.

THE EIGHT OF SPADES:
Threat of serious illness for a relative of the consultant.

THE SEVEN OF SPADES:
Small problems in sentimental projects.

Audio Video Meaning of The King of Hearts
Forcardslovers was created by a group of card game enthusiasts. ForCardslovers.com is a website where we share the meaning and the interpretation of cartomancy, as well as our favourite games with the different cards that exist in the world and, moreover, you can play online the card games of the moment. Enter and discover also different magic tricks to surprise your family or friends!
Meaning of The Ace of Hearts ❯

Meaning of The Ace of Clubs

5 of Wands, All the Tarot Card Meanings

Meaning of the Card 9 of Wands on the Tarot

Add a comment from Meaning of The King of Hearts