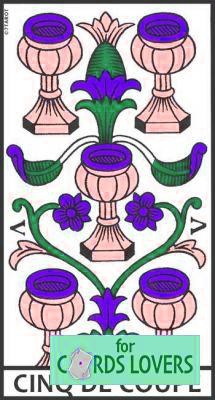 Wounds and memories of the past, bonds and attachments remain present and open. From this perspective, the map implies that we tend to think of ourselves as a victim of life or to take pity on yourself. So the 5 of Cups card itself contains negative emotions about ties, bonds from the past that are holding you back today from moving toward a more positive future.

The 5 of Cups is a card of regret. It shows the hold of emotions and the difficulties of turning one's gaze away from what is painful, even though it is in the past. In general, this minor Tarot card is interpreted as a card of loss and disappointment. However, with the Tarot, it's all a matter of point of view. To understand how to interpret the 5 of Tarot cups read the explanations below.

The 5 of cups of the Tarot deck upright : Disappointment, looking back, regrets

The 5 of cups of the Tarot upside down: forgiveness, letting go, moving on...

Description of the 5 of Tarot Cups Blade

The 5 of Cups is one of the Tarot's minor arcana. It presents four bowls and one in the center. From the central bowl comes the vegetation.

It's a floral explosion that goes all over the place. Both upwards, the divine, and downwards, the material. However, this explosion seems to know limits and to turn only on itself not letting go towards an opening.


The meanings of the Tarot card at the location

The card of the 5 of Tarot Cups is a card carrying a strong emotion of regret, almost resentment. As with all the cards in the series of cups, it will essentially talk about emotional feelings.

The cut five seems to indicate a situation that did not go as well as we would have liked. Because of this, the atmosphere on the map is one of sadness and disappointment. The map is rather static. It shows that one is rather focused on the source of regret or disappointment. It does not show what is in front of it. On the contrary, one's gaze is riveted on the cause of failure.

The five of Tarot cups suggest that one is stuck in past memories. It is impossible to let go.

Wounds and memories of the past, ties and attachments remain present and open. From this perspective, the map implies that one tends to see oneself as a victim of life or take pity on yourself. The 5 of Cups card itself therefore contains negative emotions in relation to ties, ties from the past that are now holding back the step towards a more positive future.

The first message of the 5 of Cups - the emotional aspect

If you pull the 5 of cups, it indicates that it is now time to turn your gaze to something more constructive than the past. If you are frustrated with your life and what it is, it is now important to learn from your mistakes and move forward.


The five-cup card also shows that apart from emotional feelings, there are real ways out. This card, especially in the right place, is not negative. It simply shows a negative feeling of the situation that prevents us from understanding that new possibilities and opportunities are now available.

But to do so, one must learn to look up. So now it's time to focus on more positive things and move forward. By being open to what life can bring you, you can finally see the new possibilities.

The Meanings of the Reverse Tarot Card

The upside down five of cups may indicate that you have just experienced failure. You are experiencing situations that create in you emotions of regret.

For example, you are worried because you have failed at something important to you. But the card here comes with shame. There is in this Tarot card also the fear of what people will say and what others might think of you. Because of this you keep your emotions and feelings to yourself. You remain closed to others. Besides, it is possible that they may not even suspect your torments. This leads to a great feeling of loneliness.

The message of the upside-down five could be that now may be the time to open up and share your pain with others. Maybe they will be able to help you. Others may be able to show you a better way to ease your suffering.

This card also includes a connotation of guilt about what you may have done and how you failed.

Summary of the card of the 5 of Tarot cups

The 5 of cups of the tarot deck is mostly a card of regret. It shows the inability to free oneself from one's emotions. It speaks of confinement and suffering related to one's own inner world. The lesson of the card is to open up, to turn one's gaze outwards to free oneself from negative emotions.

You take the 5 of Cups card thinking of one person in particular...

He'll be a person totally focused on his failures. She'll think she got the wrong education. She'll be convinced she picked the wrong job. This type of person will be pessimistic and will not set a good atmosphere at work.

It is difficult to build something with the 5 of cups. The person will be focused on past experiences that he will not be able to forget. They will think about their failures and be afraid to repeat them. It is not possible to create a relationship with a person who is focused on the past. Maybe if they understand that they need to detach and learn from their mistakes...

This person is mostly focused on herself and her negative emotions. It's hard to talk about money to someone who can't project himself or herself or see something positive in life. n.

The Message of the 5 of Tarot Cups

You have to learn to look outward to live in the present.