Meaning of the Card 8 of Cups on Tarot

Meaning of the Card 8 of Cups on Tarot: 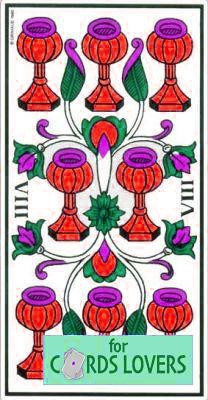 The 8 of Cups on the Tarot deck, upright disappointment, flight, abandonment

The 8 of Cups on the Tarot deck, reversed: despair, lack of vision, giving up

Description of the card of the 8 of Cups on Tarot

The eight of cups of the Tarot represents a card containing three cups at each end and two cups in the center of the card surrounded by flowers. It is a little as if these cups were filled with this vegetation. Thus, in the center one can distinguish a red circle marked with a point. This point could make one think of an eye observing.

Light blue petals are concentrated around this point. The blue colour represents the idea of reception. Dark blue petals alternating with light blue petals give dynamism and movement to this central flower. It is as if from there a form of energy is germinating.

Opposite this center, which is reminiscent of the center of the wheel in the Wheel of Fortune map, are 8 cuts that are located at the four corners of the map showing a form of stability of emotions. In the center of the cup surrounded by branches and flowers and leaves that show the active / receptive or yin / yang principle. This map makes one think of some activity in the center and receptivity from the outside. The necessity undoubtedly to move forward or to leave certain things to go towards other horizons.

The meaning of the 8 of Cups card upright

The eight of cups card that is part of the Tarot deck is a transition card. From this card emanates a feeling of sadness or loneliness in the sense of being without outside support or help.


This card gives the impression that it is necessary to detach oneself from the work done in the past. A work that required enormous construction efforts.

There is also this idea of past experience that we must now leave behind (abandoning what we know and what we know well) in order to move on to new experiences that seem at first glance to be arduous. Nevertheless, this card carries within it a lingering idea of sadness.

The 8 of Cups, a card borrowed from sadness

There is here as a form of necessity to get back on the path of life because in a way. We see that what has been achieved and successful so far is not what was expected in terms of emotions and satisfactions. Thus the notion of sacrifice is inherent in this map. The 8 of Cups asks precisely to abandon what has been done and what may be comfortable today to go further.The card of the 8 of Tarot Cuts will indicate that now is the time to balance what is done and what may be today a certain amount of satisfaction with what really needs to be achieved in life. This means that at this stage of your life you are looking for something else.

There is an overriding necessity that pushes you to go further and not be satisfied with what has been achieved. You need to focus on other values such as the search for truth and spiritual development. Somehow what society has brought you so far is no longer satisfactory. You need to devote yourself to something deeper.

Changing the direction of gaze

Perhaps this map will encourage you to move away from the pursuit of material goods, income, the acquisition of things. The Tarot card, in a way, will ask you to leave the logic of the consumer society for something that will make more sense to you.

The eight-cup card of the Tarot deck is essentially a reflection card. It prompts you to ask yourself about your path, what is important to you and to balance it out. For example, here we can see a husband who leaves his wife and children to rebuild something else. A person who decides to leave his job and security to devote himself to other tasks

The Tarot deck eight card will also indicate that you are disappointed. Disappointed to the point of leaving everything that has been built so far.

Perhaps it is possible that you are so focused on your goals that you can no longer feel anything inside you today. That you are experiencing intense emotional fatigue. The only solution then available to you is to leave, give up or run away.

The meanings of the 8 of Cups Tarot card reversed

Reversed eight card can be understood as a form of inner confusion. You no longer know what to do because you are no longer able to feel. You may also feel torn because you have an overwhelming need within you to leave or look for another way and on the other hand you were afraid to go down an arduous and unknown path.


The eight of cups in this case, will create a form of inaction that will prevent you from moving.
The 8 upside down cut may also represent the compelling need to leave a disastrous situation or one that has no way out for you. In this case, you will feel obliged to leave whether you want to or not. You have probably understood that this is the only solution. But this solution is painful because you are forced to give up something that is in progress.
The Inverted figure eight card may also symbolize some form of state of mind. A form of despair, where you no longer know what your goals are, or where you are wandering around without clear objectives. As a form of permanent anxiety that prevents you from staying where you are but does not let you build something elsewhere either.

For example, we can imagine a person in a relationship that is not very bright but who cannot resolve to leave either.
The upside-down eight card may also express runaway behaviour. It is about running away and leaving unresolved situations behind rather than trying to deal with them. In this respect, the upside-down eight card may be reminiscent of one of the faces on the Tarot deck.

Summary of the 8 of Tarot Cups card

The Tarot deck of eight card sets up a situation of deep sadness that comes from the fact that we realize that what we have built or the foundations on which we have established our lives are not the true values for us. This card therefore obliges us to take our pilgrim's staff and seek fulfillment elsewhere.

You draw the 8 of Cups card by thinking of one person in particular.

She is probably about to leave her job and does not feel satisfied with what she has acquired so far. It is not recommended to collaborate professionally with this type of person.

This person is in the middle of reflecting on his life and looking for another path in his life. Perhaps you are the path they are looking for? But if not, it's better to invest in another relationship.

In the financial field:

Here we are dealing with a person who is undoubtedly looking for values other than material values. Therefore, he or she will not be interested in the financial or material realm.

The Message of the 8 of Tarot Cups

It is sometimes necessary to make sacrifices to be in line with one's values.