Meaning of the Card 9 of Wands on the Tarot

Meaning of the Card 9 of Wands on the Tarot:

Keywords related to the 9 of Wands Tarot card

The 9 of  Wands Tarot Card reversed: staying on the defensive, having trouble keeping your position

Description of the blade of the 9 of Wands Tarot Card 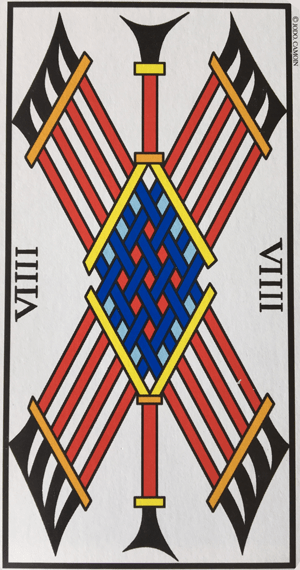 The 9 of Wands is one of the minor arcana of tarot. It features 8 wands that intersect in the center of the card and a central stick that crosses the whole.

There's no ornament in this card that seems particularly stripped down. There is only a checkerboard in the center which seems to be a battlefield where all the wands are fighting. The 9 of Wands appears here in a borderline situation where one could think of a warrior who wishes to resist at all costs and whatever the price.

This card is about challenges and the need to meet them in order to be in tune with yourself.

The meanings of the 9 of Tarot Wands card upright

The 9 of Wands might make you think that you are on a task or project and that you have to keep fighting with others to keep your position. For example, in your work, you've almost finished your project and before you present it, you find yourself having to revisit points on which you were attacked at the last minute.

However, the 9 of Wands card belongs to the suite of wands. This sequence speaks of the energy that exists within us and the powerful actions we can take to win. So in this map, you still have enough energy in you to go through with your project and come out victorious.


The advice from the 9 of Wands is not to give up.

Do not give up! You are close to your goal and you will reach it if you persevere.

The 9 of Tarot Wands presents the final challenge, the last step before success. Thus, success is just around the corner, but you must hold on and not give up now.

It also shows that you may be capable of determination and that in relation to the situation you are in a position of strength even if you feel differently. You have the assets and the means to go all the way.

The 9 of Tarot Wands also shows that you have already struggled a lot and that you have accumulated a lot of fatigue in you that makes you feel tired. Yet you still have to fight because the people or things you oppose will continue to attack you and want to destabilize you.

The map is also a hope map that indicates that "the past is not equal to the future" (Anthony Robbins). What you lost in the past or the battles you didn't win are over and now you can win if you agree to hold on for a few more hundred yards.

The meanings of the 9 of reversedTarot Wands:

The 9 of Wands upside down shows that you are struggling to work on the length. You find it hard to stay persistent, especially when the situation becomes extremely difficult and you have to fight to stay put.


Maybe you can't cope anymore or you feel overwhelmed. Here the meaning of the card will be more psychological and will talk about your inner feeling about the situation. You can no longer reach the end because you lack strength and you think you don't have enough reserves to win.

You're losing ground because you're hesitant and you can't take responsibility for the situation.

The 9 card of Reverse Wands will also talk about your approach to the situation. Indeed, you may be a little too stressed and take things too much to heart. It also shows a form of paranoia where you think people are mad at you or want to hurt you.

Summary of the 9 of Wands Tarot Card

The 9 of Tarot Wands card indicates an emergency situation where it is advisable to hold on a little longer even if you feel exhausted because victory is near. It is a card of success but which shows the need to make more effort if we want to reach the end.

You take the 9 of Wands card thinking of one person in particular:

He is a person full of perseverance and who will defend your interests to the end. A person who is full of energy and who will not give up easily.

In the sentimental field :

This person will be very persistent. That is to say that if he decides to conquer you, you will have no other solution than to end up accepting. So be careful what type of person you are if you don't like them.

In the financial field:

He will be a convincing person and will know how to work hard to achieve the final result. You can work with her

The Message of the 9 of Tarot Wands

To hold out until the end, no matter what!