Meaning of the Card of Knight of Cups:

Card description of Knight of Cups 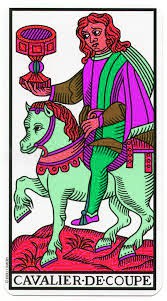 The card of the Knight of Cups is part of the minor arcane dress code.

The card shows a knight sitting on a very small horse. He holds a large cup in one hand and the queens in the other. He holds his cup as if it were a message. One might think it contains something to give or to give away. His gaze is focused on this cup.

The Tarot knight rides a blue horse . This color also appears in the sword knight card or the Pentacles knight card of the Tarot de Marseille. The horse is a mythical animal. It is represented here by its blue color. It is the receptive and active element at the same time. It is the transport that allows it to cross different worlds or various emotional states.

It feels like he's moving slowly and cautiously. He's holding this cup in front of him. He is holding the reins in his other hand, which shows that the cup is guiding and following him.

Knights in the Tarot

The Tarot card knight of Cups belongs to the series of cups that represent the world of feelings.

Knights traditionally announce in the Tarot de Marseille the implementation of an action. They can also announce a action that is taking place. They can also symbolize a personality.

Therefore knights are used to highlight an event that is happening or will happen. They can represent a person who is happening in your life. OR a person you have just met. Sometimes a part of yourself.


The meanings of the Knight of Cups card upright 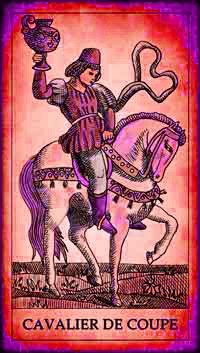 The reversed Tarot Card represents a very sensitive character. One could say that among the cards dressed in the Tarot de Marseille, it is undoubtedly the most feminine character of the horsemen, kings and servants.

When we talk about femininity, we are obviously talking about the anima that exists within him. It is perfectly accepted and assimilated. He is a full-fledged knight completely in tune with all parts of himself.

He's simply in touch with his intuition and emotions. He knows perfectly how to use them to his advantage whether in his life quests, in his projects or in seduction. He is a charming young man full of sex appeal. He is endowed with a certain charisma and generally pleases everyone.

In addition, he is endowed with a certain artistic sense whatever the fields where he develops. He knows how to express this in a romantic or poetic way. He also has a rather refined vision of life.

The qualities and faults of the Knight of Cups

In any case it's a loved one who knows how to act with kindness. But he's not very inclined to use his mind or the analytical side of his brain. When he has to make a decision, he'll always listen to his heart. He will not be inclined to use reasoning or logic.

So he will find it easier to use the law of the universe for example, or to listen to his intuition. This will also mean that he will be able to make decisions on impulse. One thing is sure, he is not a person who knows how to make plans. He doesn't like to think for a long time before embarking on a project for example.

For you, in a draw, the knightTarot deck cut may indicate that you're gonna receive a news (as with the jack of clubs), or that a person is about to arrive in your life and it will have something to do with the emotional sphere.

The Tarot Card Cutter may also indicate that you may be opening yourself up to emotional experiences. In any case, you will develop energy in this area. This will allow you to move forward in life, in your projects...

The advantages of the Knight of Cups

The right-side cutting jumper will also be able to indicate that you are now in connection with your intuition or your Higher Being and that through this you will finally be able to realize some of your dreams or in any case you will understand how to overcome the obstacles you are currently encountering.
The Cutting Jumper represents the creative side of everyone. He is the logical continuation of the cup jack and therefore extends his action especially in the creative side of the implementation of projects.

The difference between the two Tarot cards is that the Cutter Jack is at the beginning of his action, of his project, and he is setting up the events and the elements to shape it, whereas the Cutter Jumper, already has the elements present in him to put all this in place and he is starting to apply them.

This means that you are already more advanced and that you will start to create your project. You are now able to project what you have created or imagined and make it take shape. So the cut knight, like all knights, and a action card. So you go into action and implement the dreams and projects imagined by the valet. 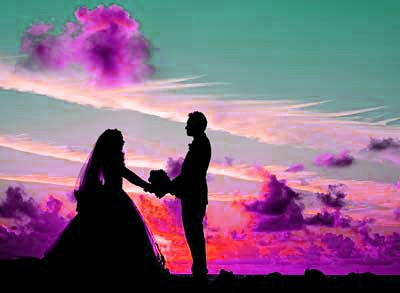 The right-side Knight of Cupsr blade can also work as a tip or warning so that you can listen to your intuition and romantic side but keep the middle way.

Indeed, this is one of the biggest problems of the cut knight and it is necessary to find a balance because otherwise it can become totally unrealistic and no longer be able to connect with the real world. In this case, he will take his imagination for the real world.

On the other hand, the Knight of Cups is an invitation to explore all the emotions and beautiful things that are inside you. He asks you to live your passions and implement your greatest ideas.

So the cut knight may ask you to devote yourself to a passion and maybe even go beyond and live from it for example. What is important with the Tarot cut knight is that you don't have to go fast to do things. The most important thing is rather to really be in touch with your inner self and to find a balance between imagination, implementation of ideas and finally action so that you can reach your goals.

The personality of the Knight of Cups

He trained people in his wake and passionately communicated his ideas to them. Will be a person with great emotional intelligence and will be applied in all circumstances. Nevertheless, the Knight of Cups can suffer from excesses in his behaviour by becoming egocentric, full of himself and totally prey to his emotions. In such cases he will be a sufficient person who will act according to his emotions and will prove to be rather unbearable.

The cut knight and a call to externalize your passions and your biggest dreams.

When the knightof the Tarot Cup is drawn backwards, it will represent a emotionally immature person just like the jack of cups. In this case, there will be no balance in his emotions which he will then fall prey to. He will tend to do things on impulse. He may be nonchalant, jealous, angry, or even temperamental. In extreme cases, the Knight of Cups will be unable to manage his emotions.

The Cup Rider may also show a part of you, or certain aspects of you that you find hard to see or don't want to see. It may be the message that you need to look at the way you present yourself to the world or how you act... What are your motivations, the basis of your actions... The upside down Knight of Cups in this example may also make you think of someone who has entered your life and who behaves illogically and who you need to be wary of.

Special features of the reverse knight of Cups

To deepen your knowledge and understanding of the minor arcana? You can get more information by going to the Tarot Manual page.

You take the card from the Knight of Cups thinking of one person in particular:

Meanings of the 4 of Swords on Tarot

The 2 of Swords Tarot Card: All the Meanings