Meaning of the Tarot Card, Page of Wands

Meaning of the Tarot Card, Page of Wands 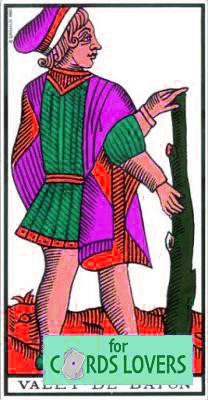 Keywords related to the Page of Wands card

Description of the Page of Wands Blade


The Page of Wands is one of the minor arcana of the Tarot de Marseille. It is a young man of fine pomp and ceremony and resolutely turned to the right. He appears in profile and seems ready to set off.
The stickman standing in front of his stick, which he holds with both hands. He almost seems to present it in the future just as one seeks to carry a project. The landscape is reminiscent of the tarot card money jack.

The blue color of the ground shows that he is connected to his intuition and in any case very much in tune with his own intuition. receptive. It would also seem that through this stick that he holds in both hands energetically and as a sign of total commitment and which is green in colour with red buds, the realization of his dreams and desires are potentially achievable.

This scene indicates the creative energy that bubbles and spurts out at the very beginning. L’creative energy of the idea or project. They look resolutely to the right, he shows that he has confidence in what he expects and what he undertakes. The colour green speaks of an eternal cycle but also of transformation.

The tarot Page of wands belongs to the suite of wands. This sequence is represented by the alchemical element "fire". This sequence represents all the energy and the potential that exists in humans and his ability to manifest it.


The Page of Wands like all Tarot de Marseille Tarot Jacks will talk about the beginning or germination of the idea or project.

The meanings of the Card upright 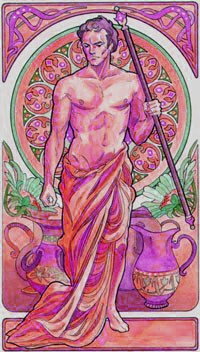 The Tarot Page of Wands at the place and a freedom card. The Page of Wands expresses the will to be free in order to start new changes.

It's a passionate, energetic character, who doesn't know much about the world but isn't afraid to take the plunge. He is rather young and often with little experience. This Tarot Jack does not yet have the weight of experience of years and events.

Our valet does not yet know the hassles of life. This character is not interested in the material problems of the world. He is eager is willing to go to any lengths to get where he wants to go.

In the observation of the card, the Tarot Page of Wands appears in a resolutely forward-looking position and with a deep desire to bring his projects and what he has in mind to life.

He is reminiscent of a kind of creative experience, perhaps a little impatient. This impatience can be found in the desire to discover or to start a new stage of life. The Tarot Page of Wands represents the spark of creation that rises from nothing and imposes itself upon you unexpectedly and suddenly. This is as in most cards in the Tarot Stick Suite.

This spark then allows a new outlook on life much more creative and exciting. Thus, the valet will encourage you to express your inner self and your individuality in its entirety. To be assertive and to live by being true and whole, without compromise.

Who's the Page of Wands?

The message of the tarot stickman is very strong. He's asking you to listen to your unconscious part to you. You must follow your aspirations, even those that seem the craziest to you, in order to find the path to freedom. In a way, the valet of sticks is asking you to release from the daily worries and imprisonment to live who you are in complete freedom.

The Page of Wands in a draw 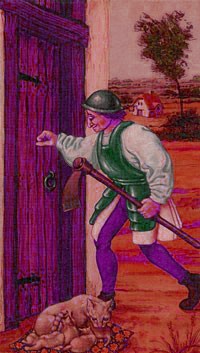 If you pull the Page of Wands of your tarot deck, it may indicate that you need to have a much more positive and spontaneous outlook on life. It will ask you to be more enthusiastic but also more impatient with the acceptance of everyday life.

The jack of clubs by his passionate character can sometimes appear to others impatient or even angry. It will therefore be necessary to pay attention to this side so as not to isolate oneself from others.


The Tarot Page of Wands allows you to create anything in your life, but also to give anything.

This card is a donation card but also of flow of energy harmoniously projected towards creation. The valet's blade will ask you to be enthusiastic, passionate to start your new life's journey. It will direct you towards your new project, without necessarily worrying about planning or where it will lead you.

It is also a map of improvisation and trust in the law of the Universe. As such, the Page of Wands can be reminiscent in some aspects of the Tarot Mate card.

Following the logic of the Tarot Page of Wands, you don't need to meticulously set up a plan (contrary to the spirit of the Money Jack). Nor do you need to know where it should lead you. It simply asks you to let your momentum carry you along. You have to let the law of the Universe take over and set up all the possibilities afterwards.

Correspondence with the Diamonds 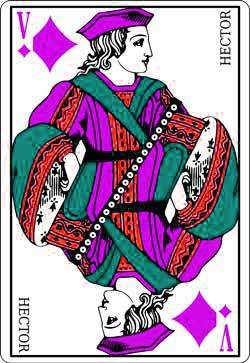 Very often, the Tarot Page of Wands will be a messenger. In this, it reminds us of the cards of tiles with the jack of diamonds which is precisely the one who brings a message by mail.

Here, the interpretation is of course broader, but the idea remains. It will therefore be a messenger bringinginspiring or unexpected newsnew information or a very good surprise.

So it could be, for example, the announcement of a birth or an opportunity to change your life.

The messages he will bring are usually always positive and pleasant because the Page of Wands is usually associated with the idea of creation or change.

The personality of the Page

The Tarot de Marseille Tarot Page of Wands generally represents a very enthusiastic person, energetic full of vigour and fire. One person very active with all kinds of projects in mind. But he's also a person freedom lover and who needs to be fulfilled in that freedom.

So it will be a person very busy, very involved in many project activities. But she should be free to choose how and when to work.

She will also be a person who doesn't like to plan and who likes to live according to her wishes and the moment.
The Tarot Page of Wands may also represent someone you know or someone who is about to emerge in your life. It could be a friend you can trust and who is devoted to you and will do everything he or she can to help you. In any case, whoever his intentions are will always be honourable to you and he will always want you well.

The person who will appear in your life will be the spark of change for you, it could be a new relationship that is emerging or a new friend who will bring you new opportunities. It will be the person who will help you to see the world differently but above all who will guide you towards a new vision of the world or your freedom.
It is possible that the Page of Wands may appear immature in some respects, but his potential is absolutely immense and his possibilities promise much.

The Tarot Page of Wands will generally be a call to realize your full potential and to live life to the fullest.

The tarot Page of wands when drawn reversed will suggest that you're not getting anywhere with the new projects or ideas you've put in place.

You do have the original vision, but you can't make it come true. Perhaps you have the wrong approach or you are not able to fully realize yourself in what you are doing because of distraction and lack of concentration of energy where it is needed.

It is also possible, if you pull the jack of clubs backwards, that you may not be able to focus sufficiently on your projects or goals to bring them to life.

It is possible that through this you may get the message that it may be necessary either to review your projects or to understand that you are not putting enough energy into them. In a way, that you don't believe in them enough.
The upside down jack of clubs will also be able to express an form of negativity in the face of obstacles or the complexities of the things that are put in place. In this case, you will be able to feel the oppositions with a resulting lack of motivation. Perhaps also sometimes indecision which will prevent you from choosing the right path or from making the right decisions or even from simply deciding to go ahead.

The types of people in the reversed Page of Wands

It is also possible that reversed Page of Wands represents a person who is afraid to commit or to take the plunge and who prefers not to set up new projects out of reluctance. It could also be a person who is afraid of responsibility and does not want to commit.
The upside down Page of Wands may also represent a rather emotionally immature character who may have a negative self-image.

In this case the person will turn into someone who is aggressive to compensate, or a person who is emotionally blackmailed by presenting himself as a victim because he cannot cope with his emotions.

It will therefore be a particularly negative person who will always see the bad side of things, particularly pessimistic, and who will take away the energy of all the people he meets. This person will make all good wills fall flat on their face and will try to make people lose confidence. He may also sometimes be rather superficial, lazy or present himself as an arrogant person who refuses to make an effort and is particularly uncooperative.

You take the card from the Page of Wands thinking of one person in particular:

add a comment from Meaning of the Tarot Card, Page of Wands