Author and references
All the meanings of the King of Cups on Tarot:

Description of the Card King of Cups 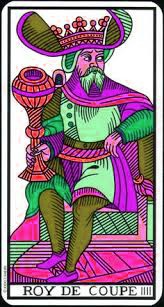 The card of the king of cups is part of the minor arcane dress code.

The Tarot card depicts a mature man as evidenced by his beard sitting on an orange and blue throne. As with the Queen of Cups, at the bottom of the card is the color blue, reminiscent of the element water.

He appears to be sitting on a flat, stable orange floor. The King of Cups holds in his hand a large cup which is open but the opening is relatively narrow. The King looks away from this cup and seems to be looking completely to the right.

The cup could represent the unconscious. Thus, our King of Cups seems to act with this unconscious but to turn away from it. Nevertheless, he retains this power which does not seem to dominate him. We can see through this movement that the Cup King does not repress his emotions or impulses. He has managed through his experience to find a balance. He now has a certain maturity that allows him to act accordingly.

He wears a large hat with blue and green edges and surrounds his crown. The King of Cups appears as a particularly nice and in any case rather pleasant figure.

The meanings of the Card king of Cups upright

The king of the Tarot deck right-side up represents a emotionally balanced character.

One could say that among the cards dressed with the Marseill tarote is probably the character who represents the best control of emotions. The best balance found between the world of emotion, creativity and the unconscious.


In other words, total maturity and perfect mastery. So he seems to have perfect control over his emotions without repressing them. Thus, he is perfectly in resonance with his inner self. There is an additional element in this map which is the intellect.

Thus the King of Cups is a perfect example of the application of emotional intelligence.

Furthermore, like the queen cut...he'll be a compassionate and kind person. Like her, too, he is turned towards others, understanding others.

He loves relationships with other people.

The King of Cups in a draw

The King of Cups is a pleasant character whose company is sought after because of his emotional stability and the calm that emanates from him. It can be said that he is the cup rider who has come of age.


The King of Cups will also allow you to face challenges or difficult situations. It will allow you to overcome obstacles but with your emotions in mind. You will be able to find a form of balance in relation to this.

Beside, the Tarot cut king also represents feelings such as compassion, the ability to love, to forgive, to be tolerant...

The King of Cups will prove to be excellent counsel. He will be a person of authority, appreciated for his listening skills.

The Tarot cards dressed up

Here, the King of Cups may represent a rather old man (kings rather represent men but let's not forget that the cards also represent energies) respected and having a certain power.

So it will be a person who may find himself in the business world or at least have positions of responsibility, but he will be a rather paternal figure, a generous and prodigious man.

As such the Cup King could be an extension of the Emperor. He could give the Emperor the emotional part he lacks.

The King of Cups will also know how to transmit his energy to other people. He will give the impetus and motivation. He will make the people he works with or collaborates with enthusiastic. He is an excellent diplomat.

The qualities of the King of Cups on Tarot

In the same way, the cup king is a generous, loving, calm, secure person. He will be seen as a doctor or someone connected to the medical world where he will help other people. If he ever finds himself in the business world, he will be a fair and loyal person.


The Tarot King of Cups has a real talent for leading people gently and firmly. He makes people work as a team and knows how to smooth out conflicts. An excellent leader.

The most important thing to remember about the King of Cups card is his emotional maturity and his ability to bring out the best in other people.

If you meet a cup king, it will be a character with a strong charisma, rather attentive and benevolent. You will immediately feel safe and secure in his presence. It will certainly be a person who has acquired a form of emotional maturity and therefore most likely someone who is at least 40 years old.

The King of Cups card is drawn reversed:

When the King of Cups is pulled reversed, you'll find yourself facing a manipulative person. Someone who may feel unsafe on the inside and need to control others emotionally.

He will then be a difficult person, soup soup to milk, and will tend to suffocate those around him. He will be particularly angry, especially when things do not go his way.

He may also be someone who tends to want revenge, cultivating resentment and resentment. He will then be more inclined to want to punish others through shenanigans and manipulations of an emotional nature. At this point, he will use his capacity for emotional resentment to create blackmail and get what he wants. 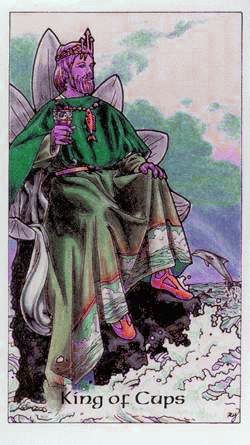 On the other hand, the upside down cup king will be an emotionally unstable person with whom it will be very difficult to live.

On the other hand, the upside-down cup king can represent a person who is unable to express his emotions. Someone who is in hyper-control who, despite everything, basically loves but can't get his emotions out. At that moment, the cup king can just like the Queen of Cups upside down find themselves in a system of emotional dependence that will prevent him from freeing himself. Unable to find a way out, he too may fall into alcoholism or some form of escape from his suffering.

If in this case, you are pulling the cup king upside down it means that it may be time to take some distance in your relationship and take stock.

The upside-down cut king may also suggest that it is necessary to take control of your life, especially from an emotional point of view, in order to feel better.

Summary of the Card King of Cups

The King of Cups is an excellent card for emotion. It represents emotional maturity and the ability to know how to use the emotional body in a balanced way in order to circulate energies harmoniously within oneself.

Would you like to deepen your knowledge and understanding of the minor arcana? You can obtain more information by going to the Tarot Manual page.

You take the King of Cups card thinking of one person in particular:

The message of the King of Cups

The perfect balance and the middle way

All the Meanings of The King of Wands Tarot Card

All the Meanings of the 6 of Wands Tarot Card

Meaning of the Knight of Pentacles Card on Tarot