Meaning of the Knight of Swords

Description of the Knight of Swords 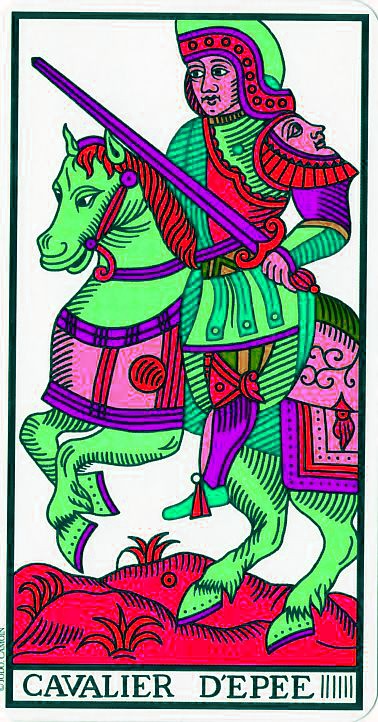 The map of the Knight of Swords is part of the minor arcane dressed up.

The Tarot card represents a rider sitting on a tall horse ready to attack. The horse is blue in color, showing that it is totally receptive to its rider.

The Epee Rider holds a forward pointing sword in his hand, showing that he is ready to charge forward and fully into the action. The horse himself is ready to pounce.

Riders traditionally announce in the Tarot de Marseille the implementation of an action, or a action that is about to take place. He will also be able to symbolize a personality type. Riders are used to show an event that is happening or is about to happen. They can represent a person who is happening in your life or someone you have just met or a part of yourself that is very important.

The meanings of the Knight of swords map at the place 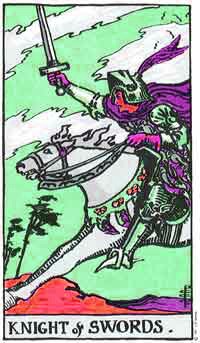 The Tarot Knight of Swords at the right place represents a character arrogant.

One could say that among the cards dressed up in the Tarot de Marseille, he is undoubtedly the most carried away and least thoughtful character of all. He is certainly obsessed by an idea. This horseman has only one desire, it is to achieve what obsesses him.

This character is often blind. He will go ahead without looking at the consequences of his actions, or even judging the difficulties he may encounter. The main thing for him is to go for it.

The Knight of Swords is a steamroller.

The Tarot Sword Jumper is a character carried away full of energy, full of life. But He has no idea what the responsibilities are. He also lacks compassion for others or empathy.

Once he has set his sights on an idea, nothing and no one can stop him. The Tarot Sword Knight has no feelings. He has no emotions. All he thinks about is moving forward. Nor does he see the risks or dangers. The only thing that moves him and interests him is to move towards his goal and succeed and win. No matter the battle, no matter the consequences, and no matter how he will end up himself.

Nevertheless, this card may show some positive sides

It is quite difficult to find totally positive sides to this map because the consequences of actions are never taken into account. Indeed, the Tarot Sword Rider is so blinded by his desire to succeed that he can sometimes become dangerous as his actions are thoughtless.

We have the impression that he's running out of time. He has to go for it. Because of his lack of preparation and time, he's unscrupulous. On the other hand, he's a character who has no emotion. Nor will he be able to understand the needs of others. In fact, only one thing matters to him, succeeding in what he has decided to do.

The advantages of the swordsman 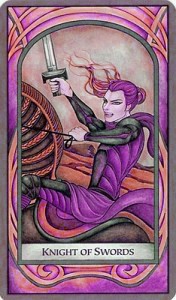 Nevertheless, the Sword Rider card can be useful whenever you need determination to start a new venture. There are times in life when it is necessary to decide this way and not to stop in front of obstacles or people who are trying to stop you. The Tarot Sword Rider may also symbolize the'burst of energy that propels forward. The impulse which allows you to get to the goal quickly.

Thus this rider will push you to the achievement of your goal, helping you to overcome all problems, all obstacles.

The swordsman will be double-edged because it is obviously necessary to know how to find a balance in the action.
The intellectual side of the swordsman should not be neglected either. Indeed, the sequence of swords represents the logical worldIt's about thinking and acting.

Thus the Swordsman is a intellectual character. Ou who at least uses his brain and his thinking in a predominant way. It is also excellent in communication matter like all sword cards. That makes him capable of making excellent arguments. He can be particularly effective when it is necessary to negotiate.
Although the Tarot Sword Knight is devoid of empathy, he nonetheless likes to work as a team player. He also likes to share his abilities with others so that he can share his ideas and develop new points of view.

The Tarot Sword Rider is a call to action for you to take immediate action.

The sword knight's card is drawn upside down:

When the swordsmanis pulled upside down, you'll find yourself facing a person terribly impatient, impulsive. A person who will be so impatient with the energy he's so full of.


This has various consequences,

The Reverse Swordsman will be able to represent a person with a thousand and one ideas in his head and not be able to implement any of them. It will be an unpredictable person, and terribly disorganized, who will disperse all his energy to come up with ideas and not implement them.

Sword riders are people brimming with energy who can take you along in their whirlwind. They know how to talk and how to transmit their passion, but sometimes it is important to take a step back so as not to get caught up in projects that don't make sense.

His best weapon, the word. 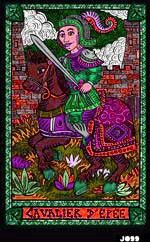 On the other hand, the sword rider is also a great speaker and he's very good at communicating. The upside-down card will represent a character who will talk more than he will act, and will sell a lot. He will also tend to make things up or brag a lot. So you have to be very careful not to be fooled by this kind of character.
The upside down epee rider will also indicate, if you draw this card, that you need to step back from the situation in order to better understand how to move forward. It may also be a call to gain more experience and maturity, because just as the Jack of Swords was inclined to learn, the Reverse Swordsman also has this ability but has difficulty concentrating and stabilizing.

The Knight of Swords, independence above all

This card is also about need for freedom and independence. The impatient nature of the sword rider will make him tend to make mistakes often, mistakes that they will sometimes pay dearly later on.

This card could also represent a rebel, or someone who is fighting to regain his independence but is not doing so methodically. Simply by exploding and putting himself in a position of revolt and struggle.

The inverted map of the sword rider might also suggest that it is necessary to take a step back from the situation and time. A way of saying that one should not get into action right away and that one should accept to take a little time. Thus the map will explain that you should not exhaust yourself trying to arrive at any cost if the obstacles are too great.

To deepen the knowledge and understanding of the minor arcana? You can get more information by going to the Tarot Manual page.

You draw the sword rider card thinking of one person in particular: