13 things to know about Capricorn 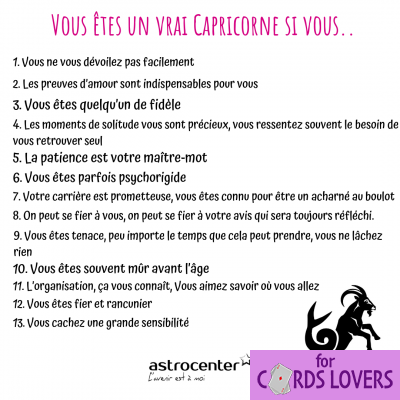 From December 21 to January 20, it is the turn of the astrological sign of Capricorn to be celebrated! What best defines the natives of Capricorn? Discover his preferences, his character traits, his perfect love matches and more: here is 13 things to know about Capricorn.

What's coming in 2022 for this sign? Go discover our astro forecast 2022 for the natives of Capricorn.

1. His favorite colors are: the great classics such as black and white, beige, grey, taupe as well as so-called earth colours, which he arranges with art.


2. Its metal is: lead. Lead causes acute or chronic poisoning: lead poisoning. This disease is so called in reference to the planet Saturn, which is also the ruling planet of Capricorn, symbol of lead in alchemy.

4. Its flowers are: all kinds of ivy and wild pansies.

5. Its ruling planet is: Saturn.

6. His birthstones are: onyx, jet and smoky quartz.


7. Capricorn is... A great logical and thorough thinker, also able to philosophize at times! Agriculture as well as trades and professions related to medicine, art and administration will allow him to earn a good living. This being is gifted for meditation and reflection. He is able to make a detailed and in-depth analysis of a situation and the human factor that led to it. Capricorn is serious, traditionalist, thoughtful, applied, sometimes laughing because endowed with a sense of humor. He owns a spirit of responsibility as well as a good memory which allows him to learn and retain the teachings – unless he has suffered from a significant attention deficit disorder since birth.


The planet Saturn gives him a strong need for permanence and a desire to create projects or earning opportunities that will last. In short, he cares about the longevity of his creations (including his family life), people (while he has no control over death) or feelings (he worships the authenticity of feelings).

9. Her perfect love matches are:

11 What This Zodiac Sign Symbolically Represents : The Persians called this constellation the "Sea Goat" "Vahick". Mahara which, in Sanskrit, means Sea Monster or Sea Serpent. The Romans rather associated it with the Goddess Vesta (Goddess of fire and the domestic hearth. According to some legends, the father of the "Sea Goats" is "Pricus", who was created by the God Chronos (the God of time in Greek mythology). The God of time is Saturn, younger son of Uranus, God of the Sky, and of the ancient Tellus or Vesta, Goddess of the Earth. Saturn would have associated himself with "Janus » (the Roman god of beginnings and endings, choices, passage and doors). It had two heads: one face turned towards the past, the other towards the future. It is celebrated on January 1, which marks the beginning of the year in the Roman calendar.

12 Its greatest weaknesses: Money is very important to this sign because he has a visceral fear of running out of it. The strangest thing is that it never runs out. If he does not resolve this fear, his life will generate moments of debacle disturbing enough to make him understand that even if he lost everything, he came out of it well. What karma! In addition, he does not like to engage in perilous or risky activities. Life's disappointments usually make him very suspicious.

13 His best quality: His perseverance is great! A little stubborn, certainly, but when he gets down to work with a good heart, things happen!

Consult all the contents of Ginette Blais, our astrologer.

13 things to know about Leo ❯

add a comment of 13 things to know about Capricorn