What if you had a mystical tattoo?

Especially if you want to become a witch or you like esotericism and astrology, the mystical tattoos can nicely enhance your body while adding a additional symbolism. Planets, stars, runes, maybe you already have one? Or maybe you secretly dream about it? Here is a portrait of the mystical tattoos available to you.

The runes are symbols that would hold a power capable of influencing the world. "Rune" means whispered secret. The best known symbols are those of the Old Futhark, a Norse alphabet made up of 24 runes. However, it is far from being a simple alphabet. Writing a symbol would amount to exerting a magic act, a ritual in itself, since by inscribing the rune on a rock, or on any object, the power of the rune would be integrated into matter.

We can then use the inscribed stone of a rune to call upon its power in our lives, such as Sowuldo, the rune of the sun and fertility, or Inguz, the rune of satisfaction and fulfillment.

And there is Wyrd, the white rune, without symbol, which represents the silence of the runes. 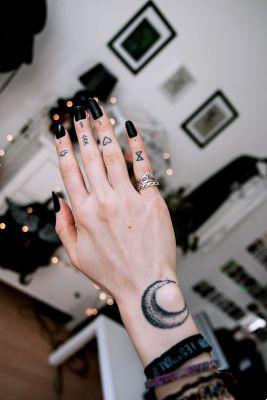 If many use runes for magic and divinatory rituals, their linguistic particularity — that is to say that the inscribed object embodies the very meaning of the inscription — makes this alphabet very interesting for mystical tattoos. It would be tattoo a symbol and put the power in yourself. This is without counting the fact that the runes are geometric, pretty, curiously fashionable, while having a much larger dimension. So if you believe in the power of language and this centuries-old alphabet system, maybe it's time to learn the language of runes to combine them on your fingers, your neck or your arm.

The étoiles fascinate, the night sky is hypnotic. We often try to find meaning in astrological phenomena incredible, the way for example that the constellation guide note future or that a blue moon can influence our lives. It is true that the moon exerts a magnetic power on Earth, some would even say a influence mystique. It is therefore not surprising that the phases of the moon, the constellation of its astrological sign or the planets are among the mystical tattoos!

It's a way to bring some astral light on his skin, to say that you are moving with the moon, to remember that you are part of a greater whole, the universe, which unfolds in its multiple complexities. The alignment of the planets, the cycles of the moon, an eclipse or a constellation are tattoos to consider when you want mystifier son corps.

Element of water, air, the wheel of Hecate, the pentacle are all symbols used in witchcraft or in esotericism, ranging from Celtic signs to ying yang. Most of these symbols are already geometric, it is enough to combine some, or to add a few lines to create its unique symbolism, proposed to oneself.

It is also possible to tap into religious representations when associated with your belief.


Tap into the imagination

Apart from signs, secret languages ​​and stars, a mystical tattoo can also embody the idea of ​​​​the symbol by a figurative representation. For lovers and lovers fantasy and magic, a mystical creature, a mermaid or a wolf woman can also demonstrate on her skin a mystical relationship to the world. A woman who transforms into stars, a dragon with the third eye or hands encircling the thorns of roses are other examples where mysticism takes the form we want it to. 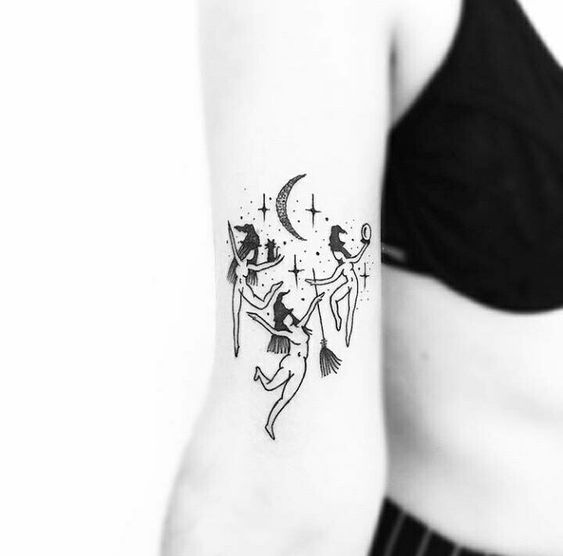 After all, it must be remembered that a tattoo remains personnel and that it doesn't matter, it's up to us to give it the meaning that we wish, including his degree of mysticism. Nevertheless, inspiration can seize you more by going to draw on beliefs shared, occult, rarely represented (which perhaps gives them all the secret and incredible aspect). It's like carrying an old, repressed symbolism. To hold on one's skin a rebellion, a prohibition. But above all, deploy an image of your taste that you will carry everywhere and that will be eternally dear to you.

add a comment of What if you had a mystical tattoo?