The Justice of the Tarot is an austere card. One sees there a straight and not very encouraging character. Justice is not often appreciated. It puts you face to face with yourself in the naked truth. It is always difficult. In terms of her world view, she is a bit dichotomous. But it is also possible to appreciate this Tarot card for all the lessons it can teach. To know how to understand the Tarot card and make the most of it, read the meaning of the Justice card below

The Justice of the Tarot card upright: Rules, justice, decide

The Justice of the Tarot reversed: Cold, intolerance, legal issues

Description of the Tarot Justice Blade 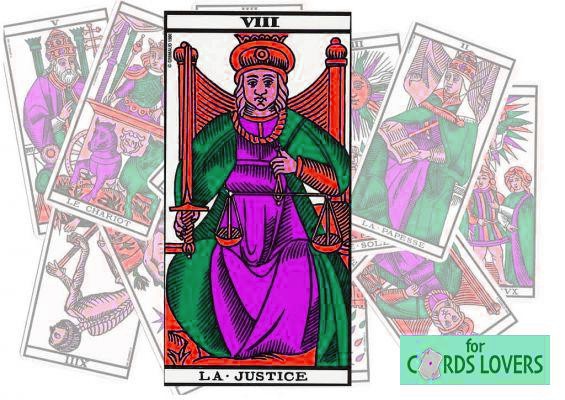 The Tarot Justice character sits and looks out with a cold, penetrating gaze.

The Justice card is the arcana 8 of the Tarot. It holds a sword in one hand and a balance in the other. It symbolizes that it is a fair decision. She wears a crown on her head with a circle showing the energy of her thoughts. Her thoughts are structured and in order.

The sword is not entirely straight, which shows the imperfect side of Justice.

Moreover, it is double-edged, also showing the impartiality of Justice or both sides of the coin. Justice works with intuition and applies it to rule and logic. The red dress shows its power of action over the world.

The Meanings of Justice

Tarot Justice brings the Tarot reader face to face with himself. He reaps what he has sown. The card of Justice warns to always behave correctly towards the society and the family.

The Tarot card of Justice represents Justice simply in its fair side. It is the representation of the rule and the search for truth. It also indicates that the Tarot Justice card will always indicate the best decision to make. In any case, the fairest decision. It may also indicate that you must accept responsibility for your actions.

Tarot Justice also shows that you have the consequences of your past actions and decisions.

You have to pay for it whether it's positive or negative. The Justice Card also represents the awareness of the consequences of each person's decisions in the long term. But this is not as tragic because the blade of Justice also implies the notion of lesson or understanding of one's actions (the sentence is there to make progress).

Then you can right the situation for the future by not making the same mistakes for example. Tarot Justice will indicate the search for the deep truth of any situation or action.

The Tarot Justice card may also indicate that it is time to make a decision. Thus, life asks you to focus your attention on a solution. Justice may not give you the answer in itself, it will draw your attention to the actions to be taken which will normally be indicated by the surrounding cards.

When the Tarot Justice card is shown right side up, the consultant may face temporary restrictions as a result of actions or decisions to be taken.


The map of Justice heralds success in trials. It also announces success in companies but after a very long period of time (the slowness of justice). If the arcane comes out last, it ensures success.

To see it more clearly in you, meditate with the Justice card. Guided meditation will help you to better understand and retain its meaning while benefiting deep within you from its message.

Summary of the Justice card

The card of Justice represents, in the most direct way, Justice and everything related to the world of Justice, in one way or another.

Justice is being pulled reversed:

The law remains the same regardless of the meaning of the arcana. It announces in this case judicial complications, interminable and complicated trials, lost causes, conflicts.

The consultant pays for his bad deeds, or, is the victim of gossip, false accusations, unjust convictions, the appearance of disputes.

Injustices are being committed. Risk of bankruptcy, blackmail, theft, corruption, aggression, it can announce divorces or separations.

Summary and synthesis of the Justice card

Symbol of Trials. This card will show intolerance in actions and in people's minds. The Tarot Justice may speak of exploitation by people of law, excesses, disputes, abuses, theft, or traps. All that is rigid and intolerant.

The card acts on several levels,

But as justice is sharp and rigid, it can also symbolize fixed, too strict relationships, one does not make justice bend.

You play the cards thinking of one person in particular:

The message of Justice:

You have to be measured and balanced in all things.

Justice or the balance of good and evil.

- The blue covers the red showing the spiritual and emotional dimension of the arcane.

- The red underneath his blue robe, which largely covers him, allows us to suppose that it is the mind that dominates over action or reflection before any action which must therefore be channelled.

- The yellow colour of the scales, the throne, the crown and the sword shows that it is a divine and universal justice. The presence of yellow illuminates the arcane to affirm that justice allows one to illuminate the path and to come out of darkness. It is divine justice applied to men.

Particularity of the Justice of Grimaud

The flesh-coloured face as well as the hair shows that justice, although divine, is worked out by man but transmitted from divine source as is evidenced by the yellow headgear, the yellow of which seems to come from a higher sphere.

The braided and flesh-coloured hair shows the mastery of this power.

Getting the Grimaud Tarot

The woman depicted in the arcana holds the scales in her left hand and the sword in her right hand. All punishment is preceded by judgment. There is no expeditious justice.

Justice represents reason, conscience, the balance of good and evil.

add a comment of Justice on Tarot - Tarot Card Interpretation