The Hanged Man is a beloved evil in the Tarot. It often represents ideas of blockages or endless situations. It is an insurmountable long wait. However, the Hangman Tarot is a very beautiful card if one looks more closely at its deep meaning.

Description of the Hanged man's blade:

The arcana 12 of the Tarot shows a young man hanging by one foot and framed by two trees which are also upside down. His expression is peaceful and shows that he makes no effort. He seems to have decided on his position, and by his inverted posture, he sees things differently, from a different angle.

The rope seems not to hold the character because instead of wrapping around the ankle, it goes around the heel, which makes such a posture impossible according to physical laws, moreover if we turn the card over, we realize that the character seems to float in the air.

The card of the Hanged man is thus not constrained in this position, but it shows its weakness and its vulnerability it is hung by the left heel (the Achilles' heel) and moreover this posture was a torture reserved in the Middle Ages to the debtors, in Antiquity to the Christians.

The young man is dressed in red and blue.


The Hangman's card is drawn upright: 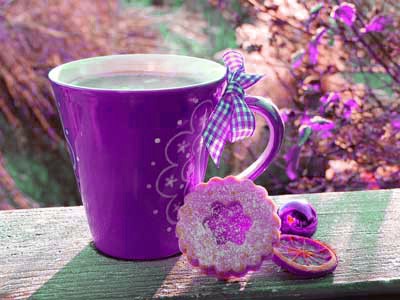 The Hangman's card draw is upside down. He sees things the other way around. This makes us feel a certain softness, far from the conventional and rigid patterns.

The notion of being hung upside down gives an idea of leaving things unsettled. The result is a period of letting things go and not making a decision.

Hangman then represents the need to pause, pause and wait. It is thus necessary to postpone things to be done because it is advisable to pay a sustained attention to what happens inside.

This card talks about the time it takes to step back to improve oneself and better understand the actions taken. The perspectives are different and may be easier to live with in this position. 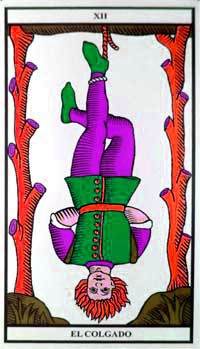 The Hanged Man is more receptive, his adaptability is greater. Because of his tied hands and feet, the consultant has plenty of time to reflect on the situation, to meditate, to use his mind.

Thus it is the moment of waiting, of reflection, any action is excluded. But once this time has passed, it will be possible to get back on the road because this time will have allowed new opportunities to arise and to see life differently.

The Hanged Man's Tarot card shows that the character is not constrained in this position. But, he shows his weakness and vulnerability. He is hung by his left heel (the Achilles' heel). A tortured posture reserved in the Middle Ages for debtors, in Antiquity for Christians.

Another surprising fact is that it stands perfectly straight and perpendicular to the two trees that surround it, which may refer to the columns of the temple of Solomon, Jakin and Boaz.

This astonishing verticality seems to show that he has found a perfect balance between the forces. Trees by their color seem more active than the Hanged Man himself. Without doubt this expresses that the Hanged Man's surroundings have a vitality and a life of their own independent of him.

We must accept blockages and delays as a sign of destiny. We have to go through a necessary test to be able to move forward, to win a better future.

Only in this way will the future be positive and regeneration complete. To do this, you have to be able to accept a sometimes long pause.

The Hanged Man... another vision of the world 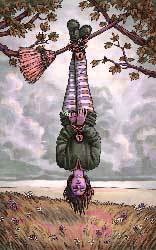 All material and physical matters are subordinate to moral values. The consultant may have to change his point of view on things and decisions (hanging upside down posture).

Likewise, the current situation may well be completely reversed from what was originally planned.

The Hanged Tarot card may also make you think of restrictions and sacrifices. These can be accepted with full knowledge of the facts. But to free yourself from them, you must connect with your Higher Being to understand their mechanism and let go.

In any case, it is important to take a step back in order to better understand the emotional mechanisms that create this bond of dependence. The ones that push you to sacrifice yourself in a relationship for example.

The Hangman Tarot card is an invitation to step back from all things and from life itself. Accept and welcome what is in you and the situation for itself. If you learn to truly let go, then the situation will resolve itself.

When the Hangman's Arcanum of Hangman is found with positive cards, it announces success after a long trial, long work, sacrifices or a beneficial ordeal. The inverted position of the card indicates the need to see things from another angle, to have another perspective of life and of oneself. By doing so, the world will appear different to you and new perspectives will open up to you.

The Hanged Man and Love 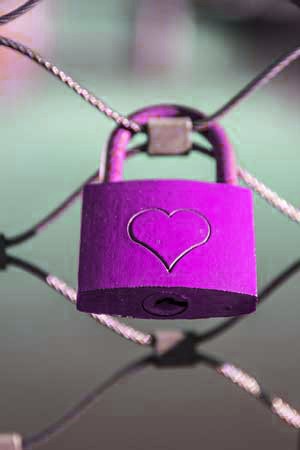 This card has a very special meaning in love. The Hanged in Love announces that in a relationship some elements may have remained secret. In particular, if the card of the hanged man is associated with the card of the Papess in love.

The Tarot Hanged Man is a willing victim. This is often found in a relationship where one partner agrees to sacrifice himself or herself in the relationship. He feels smothered but does nothing to change it because he feels he has to do so.

She could also speak of a platonic love relationship. Or one of the persons does not say his feelings. It can also be a relationship that is meant to be, but cannot get off the ground. The Hanged Man in Love also talks a lot about waiting and not achieving at first. He will indicate that it is difficult to start a love relationship.

What are the cards talking about love in the tarot deck?

Summary of the upright card of the Hanged man on Tarot

The Hanged man is a card that will often speak of sacrifice, self-sacrifice but also charity. In this configuration, one tends to practice forgetting oneself, especially for example in a relationship.

But it will also be a card of disinterestedness and voluntary action and the pleasure of doing things for others without expecting anything in return, a little also in the sense of the Papal card. matter, prudence, moral discipline, forgiveness obtained, platonic love.

The Hanged Man is pulled reversed: 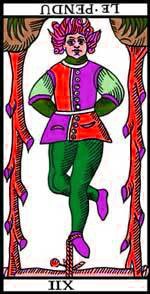 When the card is surrounded by negative cards or comes out upside down, it is accentuated in its inertia and blockages.

Thus, one can expect unfavorable events, lost opportunities, paralyzing uncertainties, the inability to resolve oneself to give up in order to improve one's situation.

There is a risk of a cascade of failures, loss of contact with reality, escape to artificial paradises such as drugs or alcohol, and depression. All kinds of disillusionment are possible, bitterness linked to the impossibility to act, loneliness, incomprehension.
He can also be the victim of lies, traps, hatred and settling of scores.

But the card of the Hanged man reversed may also indicate that you feel you are sacrificing yourself. And, that the ties that bind you in a situation are stifling. As a result, you can't move and you feel suffocated. You feel like you are totally stuck in a situation with no way out.

Hanged man reversed may also suggest a loss of confidence and faith in the future. A lack of desire to move forward and live. A refusal to continue to fight. It is therefore advisable in these times to retreat into one's shell to take stock and gather one's strength and energy. Letting go and welcoming your feelings will be the best thing to do.

Summary and Synthesis of the reversed Hanged man Tarot Card

The consultant must take into consideration his past and present when making decisions about his future.

As things stand now, actions are not mature enough to conclude. On the mental level, the consultant may lack maturity or determination to make choices whether they belong to the sentimental, intellectual or material sphere. It may be necessary to give up something.

The message of the Hanged Man:

A pause is necessary before resuming the journey.

Some more details on the card of the Hanged man

The immobility to which the Hanged Man is constrained corresponds to the oriental vision of the search for knowledge which can only come through the immobility of the body. Its reversal is perhaps the sign that things must be understood by their reverse side. Traditional patterns have to be abandoned, or that they are not necessarily as one might imagine at first sight.

The mixture of the two colours gives the character a certain innocence and vitality against the forces of evil against which he struggles with his inner strength, his soul. His muscular strength is useless and ineffective in this position.