The Tarot Chariot is a success card. But it also represents well-defined character traits that may be to your advantage or disadvantage depending on the position of the card.

The tarot deck can also send you back to your internal emotions to understand if you do not take a situation with too much aggressiveness. To understand and know how to control your impulsiveness and impatience in order to achieve your goals. 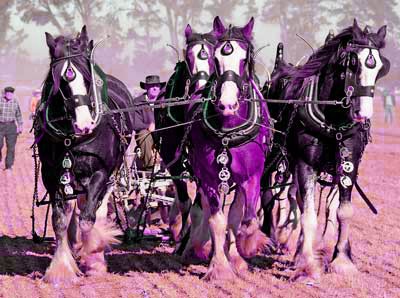 The Arcana 7 of the Tarot is a card of triumph and glory, it resolutely marks a positive momentum when it comes out in the game.

It is a positive card in a draw and guarantees stability and self-control. It symbolizes the successes obtained thanks to his work, his perseverance, the facilities in any action undertaken, advancements, just reward for his ambition.

With the Chariot you can only go forward and in the right direction, it announces success of all kinds, it is the end of uncertainty.

The Chariot card also talks about certain emotions such as the problem of aggressiveness or how to react to certain situations with violence.

Aggressiveness can be harmful as can any emotion that is too strong. It is therefore important to know how to control these emotions as you will be prompted by the following card, the Tarot Justice card.

Summary of the Chariot card

The card will speak of Success. There will be a lot of dynamism and will in the actions undertaken which will then easily lead to victory, and legitimate success. The Chariot will also speak of ambition, wishes for deserved advancement, but will also be able to show that difficulties have been overcome with brilliance. It is a card of progress, instruction, reason and reflection. 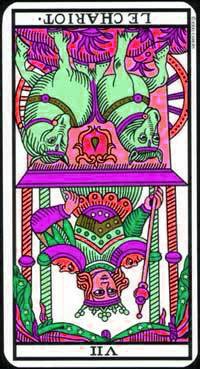 When the arcane of the Chariot comes out upside down, the fight still exists but it is doomed to failure especially if the neighboring cards are negative.

It is a card full of energy but can have different meanings depending on the environment of the other cards in the game.

You find too many opposing elements and it's beyond you. You will then feel as if you are being tossed around by life and will not be able to regain control.

For example, it may suggest that someone is trying to take control of your life, preventing you from being in control.

The card of the Reverse Chariot will be an invitation to take back the reins of your life and regain control. This can appear for example in a sentimental relationship where the other person tries to control the life of the first one.

A character who is too scattered

Losing or being deprived can be frustrating but it is important not to worry and to focus on the energy within you to regain control.


The card may be on a completely different register indicating that sometimes you have to let things go and that you don't always have to control everything. One of the card's best tips may then be to stay open to new experiences and above all to let go of the spontaneity that exists within you. It will open the door to new experiences and then allow you to align yourself again.

The consultant no longer has self-confidence and reveals himself rather by his weakness, his lack of courage. The arcane of the Chariot can also reveal the presence of insurmountable and unavoidable obstacles that will not allow the desired result to be achieved. Unscrupulous people. Risks of swindle or deception.

Summary of the reversed card

The Reverse Chariot card will talk about tears, and opposition to actions taken. So it's all blocking. It can also put the finger on professional problems, or bad projects, badly thought out for example. The Chariot will be able to talk about the inability, or incompetence, to carry out this or that task. The card will characterize a person who is opportunistic. It will then be more about escaping from reality, or making bad choices.

The card symbolizes the realization of projects, but rather in a spontaneous and sudden way.
There is no gestation, there is no waiting. The decision is made by the force of intuition. It also symbolizes speed in actions and decisions.

The consultant benefits from cosmic protection, an iron constitution, an unshakeable strength. The income, if there is to be any, will be significant, or the expenses if the card comes out upside down... The Chariot can also carry good news or bad news depending on the neighboring cards or its place in the draw.

You play the cards thinking of one person in particular:

The message of the Chariot:

Special features of the Chariot

It is framed by four (symbolism of numbers) red and blue columns (symbolism of colours) which support the canopy and which undoubtedly evoke the four cardinal points, the four seasons, the four elements...etc.

The bottom scene seems incoherent. The Wagon cannot move forward because it is pulled by two horses going in opposite directions and the wheels seem to be going in the same direction as the horses. It is flesh-coloured and certainly symbolizes man in his actions and spirit.

The chariot is driven by two horses (symbol of power, the force of desire). The two horses seem to oppose each other by the directions they take, one on the right, the other on the left making any movement difficult. The blue horse looks at the red horse, thought precedes action or the mind turns to action.

The past is an important dimension in decision making and intuition and an inward look is indispensable in choosing the future.

add a comment of The Chariot Tarot Card - Interpretation and Meaning