The Tarot Death  card is often equated with death. This is a mistake. The Tarot represents concepts. Here, it is about transformation and passage. To better understand the Tarot's arcana, here are some explanations about the Tarot car

The Death card is reversed: Blockage in a situation, inability to evolve, resistance...

Description of the Blade of Death card

The Death tarot card shows a rather gaunt character who actively holds a scythe in his hand and seems to be moving decisively to the right.

On the ground there are human fragments, crowned heads representing whatever position they are in, everyone must undergo the supreme transformation. No one is spared. There are also tufts of grass of different colours showing that the soil is rich and fertile. Therefore, the work of Death card is not to mow but to improve and bring life back to life in another form. 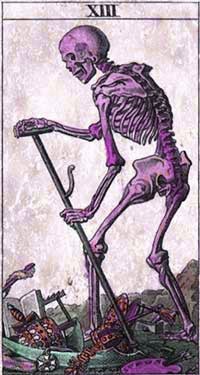 The dominant color is black. A color not very frequent in the tarot. This color symbolizes the anti-light but also everything that is created in the non-visible. Like the seeds that germinate under the ground. The Death of the Tarot could make one think of the reign of shadows and Percephal, the time of silence, where the earth takes time to rest to be reborn in spring.

The Death or Unlabelled card may appear under various names, such as "death" or "XIII", but its real name is "Unlabelled", that is, the one that is not named. However, it is only worrying for those who fear changes, for others it can only be beneficial. Because any change, any improvement necessarily involves a necessary transformation or a break.

The Meaning of the Death Card:

The Death card, which is the arcana XIII of the Tarot, signifies in a draw by essence the arcana of transformation, of moving forward, of abandoning one state to move on to another better and more promising one. The worst is over, the future can only be positive.

However, death must be understood as a concept. It can be one of the most fertile and important cards in evolution.

Death is a symbolic end of some aspect of life, a relationship or anything else. But what is important, what the end as such does not exist in the Universe. Anything that disappears must be replaced by something else. Therefore, ending something automatically implies evolution or transformation. But you have to go through a difficult phase before you can really access this renewal.

Lavoisier's famous quote seems to apply to the entire Universe in its most spiritual form as well. Nothing is lost, nothing is created, everything is transformed. "» .

The Death is a positive card

In a Tarot deck it is often the card of revitalization, liberation, evolution is profitable. This passage takes place in spite of everything, in pain, the abandonment of the past, of its emotional ties, of projects or illusions, of dreams is not easy but will always be profitable and positive.
Perhaps it is the beginning of a new love, a new profession, new plans, desires, a new life.

All this unfortunately always has a price to pay, symbolized by the Death card. The suffering of the rupture and the loss of all that was dear to us before and that we considered indispensable.
But it is worth it because from now on, even the most difficult obstacles can be overcome.

The Death card also represents everything that is linked to the dark side, to death, to darkness and therefore inheritances, initiatory rites...

In order to evolve, as for example in a relationship, you must close a relationship to make room for a new one. But to do so, a profound transformation must be carried out. Not just on the surface. Therein lies the secret of this mystery. Any change must be welcomed positively and joyfully. It is a matter of deep cleansing.

The card of the Death without a Tarot Name thus always indicates a transformation, the beginning of something different and important.

It is a fast card and it is sometimes difficult to adapt to the changes that occur. It is also possible that the transition may be difficult.

The card of The Arcane without a Name is also an indication that it is necessary to learn from one's mistakes and to detach oneself from all that is not healthy for oneself. It can be a relationship you have with a person or a situation.

Summary of the XIII Tarot Death

The Death card of the Tarot's Nameless Death is above all a transformation card. This is how it must be understood. It is not so much about the end of a situation or a relationship, but about the possibility of renewal that lies beneath it. There is always a noted evolution and the loneliness that can result is therefore temporary. Thus this card is especially beneficial and heralds progress if it is well received.

The drawing of the Death card in a Tarot consultation by email is not easy to interpret. There are many important things to tell the consultant about his past situation and the consequences it implies for the future. It is not easy to leave one state to enter another, even though it is often an improvement.

The card of the Death is shown reversed: 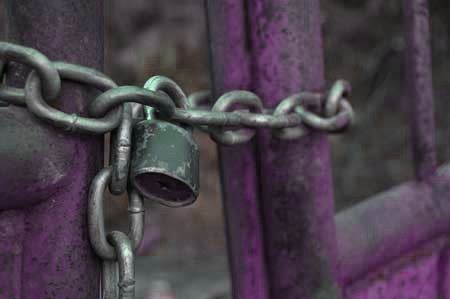 When The Death comes out reversed that's when the death takes on its heaviest and most frightening meaning.

The meaning will be more psychological and will focus on the feeling and the possibilities of understanding the situation.

Thus the changes are badly experienced, everything is badly perceived, everything goes wrong. The situation must be reviewed and changed as a matter of the utmost urgency.

You tend to want to resist the change that life proposes to you and as a result, the situation gets bogged down. You are unable to go beyond the stages of your life that you drag along like a heavy burden.

Perhaps it is because of fear of change, fear of loneliness, or other fears. These emotions block you and prevent you from doing the work of acceptance and welcome that could allow you to evolve towards a situation that will be more beneficial to you. Pulling the Death of the Tarot reversed, implies accepting to resolve elements from the past that prevent you from moving forward today.

To better understand the internal mechanisms that bind you, consult the 9 of Swords card.

Summary and synthesis of The Dearth card reversed

The card will speak of disillusionment, of pain because one cannot detach oneself from the past. It will talk about states of mind and psychological states, such as melancholy, depression. She may mention obstacles, inertia, stubborn refusal to change. In terms of relationships, she may announce a definitive separation but which is beneficial for a better future. It may also be a matter of mourning emotions or feelings, past ties that are harmful.

Do you need to consult to better understand your situation and find solutions? Don't hesitate to use the commentaries.

This blade embodies total renewal and profound transformation. It can also speak of remoteness, of stopping, immobility or death.

The message of Death card:

It is necessary to know how to cut through and detach oneself totally from the past in order to renew oneself fully.

Details on the scythe of the Death

The Death represents a skeleton with a scythe that seems to mow men down. It is the representation of death as it may have appeared in many frescoes or paintings. However, a closer look at the scythe scythe handle is square, which must not be very practical for mowing. In fact, the skeleton seems more sweeping than mowing.

This flesh-coloured skeleton (symbolism of colours) seems to represent everything that has to do with man by its colour. But also life, as evidenced by its spine in the shape of an ear of wheat.

Thus by the scythe skeleton does not kill but announces a transformation. It will make one think of death in religions which is only a passage to another state. The handle of the scythe is yellow (symbolism of colors in the Grimaud Tarot), a divine and cosmic principle which shows that it is animated by a higher divine force.

The fragments on the card

The body parts present on the lower part of the arcana show that the body can be divided, fragmented, while the soul remains always integral and unique. If we analyse the pieces a little more closely, we find 3 hands (the acts that man performs), one foot (the path), two are (the quality of thoughts). The presence of the bare bones speaks of a questioning to the deepest part of the being. As for the heads, the crown on one of them shows that no material power allows us to evade this logic.

The few blades of grass in blue (symbolism of colors in the Grimaud Tarot) and yellow announces that death, as presented here, is only a passage to life and that this life is divine in essence. In no case is death an end in itself.

On the symbolic level, in the sense that the transformation is a radical change, man, by losing his body, also loses all his material possessions and creations. He finds himself freed from it and can finally rise.