Keywords related to the Pope on Tarot

Description and Meaning of the card, The Pope

The Tarot pope is the highest religious figure in the game. He is also the male counterpart of the Pope's card. But in a broader way, one can also think of a high religious figure, whatever the religious, a supreme guide, such as a shaman or a lama.

The Tarot de Marseille Pope card shows a religious man sitting in what might look like a Church or Cathedral.

He wears red and blue clothing which also gives him the energy that animates him. One of his hands seems to be blessing, the hand is at the level of the heart, making one think that he is blessing with the heart the two sparrows at his feet.

The Pope reigns in the world of men, but takes his power from the high spiritual authorities. This makes him different from the Emperor of the Tarot. It is the highest power.

He wears a three-level tiara, symbol of his domination over the 3 worlds. His crosier also has 3 levels and seems to represent the balance between the conscious and unconscious world between the material and spiritual worlds.

The task of the Pope of the Tarot is to unveil the mysteries. His profound task is to show the way. The two sparrows seem to be initiated by the Pope.

The Pope's arcane is shown upright: 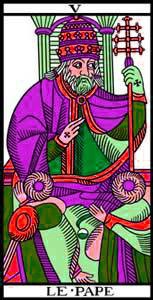 The Pope is a person who follows the rule. The Arcanum 5 of the Tarot may suggest that your desire is to stay on the beaten path.

The Pope does not propose to be original in your approach, but rather to adapt to the way the system or society works.

It's all about matching belief systems and doing what's expected of you. The Pope will then gently guide you through the system.

The Pope's card is not a challenge card but rather a card that asks you to comply.

The pope is a guardian 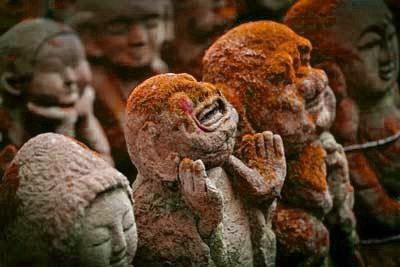 The Pope is also the guardian of the rule. of the religious, spiritual rule. He will lead you through rites, or ceremonies, like weddings, baptisms etc...

Thus the Pope will often represent institutions (religious, spiritual) or bring out their deep values. He will also announce that if you work in one of these institutions, you must learn to conform to the rule. And if you are in society, he will invite you to follow the paths laid out.

The Pope can also be an invitation to better understand your roots, your traditions or your spiritual heritage.

This arcana of the Tarot de Marseille indicates that the consultant can count on the help, support and understanding of a higher authority.

He also benefits from divine protection. The Pope of the Tarot de Marseille also symbolizes moral or intellectual elevation. This card is in harmony with the universe and therefore everything that happens can only be good and pleasant if one follows its precepts.


The Pope is the mediator

The Pope is a confident and confident mediator, an influential protector. This figure of the Tarot is certainly not an innovator, but it gives the strength to know how to lead the group and make the most of it. Our high spiritual representative will also be able to talk about the need or desire to join groups (of all kinds) or to join a form of teaching (studies, higher education...).

He favours all that concerns religion and the sacred. He invites to forgive and to give oneself in the confidence of faith, he gives consolation and the necessary spiritual support. He may represent a close relative. But above all, he represents the professional, the competent man able to help and provide support, healing...

The Tarot pope may speak of a desire to learn or the need to find a guide or mentor. But he will also show the need for research to understand or the thirst to access knowledge.

The Tarot pope in his role as an insider may also represent a person who comes to your aid. A help to relieve you, as a psychotherapist, a psychologist could do. It will be a person full of wisdom and who has acquired knowledge and experience. He or she can also be a mentor. In a broader sense, the Tarot pope can represent a specialist of any kind, a doctor, a surgeon... in any discipline. But he will always tend to be in the business of helping and transmitting knowledge, or of great knowledge and reflection on the human soul.


The Pope of the Tarot may represent the institution, the career, but from a spiritual point of view.
The Pope is also the link between the material world and the sacred world. It is a form of channel of transmission and for this reason he appears as the figure of the Pope. He can therefore also be a spiritual guide who can help you to connect with your divine part.

Summary of the Pope's card in the Tarot de Marseille

The Pope of the Tarot will speak of the capacity of meditation to better get in touch with his guide. He will be a moral authority, a guide, a spiritual guide. He will show patience, and will bring help (requested) with kindness and wisdom You may ask for advice.

The Pope is also in connection with the esoteric world. He is also a person who knows how to seduce with the spirit. The Pope will be silent, discreet, and modest. In a drawing, it will often be an affirmative answer to the question. He will announce relief after a difficult situation.

The Pope of the Tarot is shown reversed in a Tarot deck. 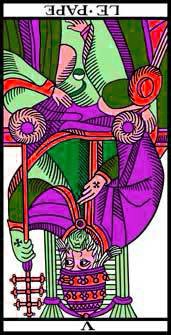 The need to comply with the rule by force without having a choice. This is not the time to question the established rules or the functioning of the structure you find yourself in.

You find yourself stuck in suffocating rules and have, for example, lost control of your life. Others are running your life for you.

But it could also be that your approach is too rigid and that you apply the rule without questioning yourself and you can then become unfair. In extreme cases, we may see a form of fanaticism.

The card is characterized by:

The person cannot get out of his materialistic mind. Abuses of all kinds are committed, risk of depravity.

The Pope reversed, the dogma...

The inverted Pope may make one think of a young person rebelling against the rule or questioning what is established. A person who wants to change things, to make society progress and who fights for that. In exchange, conflicts with authority and a lack of understanding on the part of authority may result.

The reverse Pope may also represent a person of power who abuses his power. Who imposes the rule blindly, as dictators do, for example. A person who forces others to think like him or to do the same things he does. It could also be a person who uses his power to frighten and force others to follow him.

Synthesis of the meaning of the Pope

The Reverse Tarot pope could talk about a person who is a concealer, an intolerant person. He will act with bad intentions, low actions, and resentment may be one of his characteristics. On the other hand, the Reverse Tarot pope may suggest a lack of faith, a form of inertia, or exaggerated bigotry in the application of the rule without intelligence. We will then be dealing with fanaticism.

The Pope, in reverse, can also express renunciation in the face of a situation or show obstacles, and lack of effort to overcome them.

The line of conduct to be followed which must be that of the order of things and morals. It is a very balanced and reassuring card. It is often a wise person, full of kindness and benevolence who knows how to give advice and selfless support.

You pull the Pope's card from the Tarot deck thinking of one person in particular:

Take care of your spiritual side and have no fear you have divine protection.

The Pope as well as The Papess is sitting between two columns that could represent the columns of the Temple of Solomon (his range of action is rather spiritual while that of The Empress with her throne of flesh (symbolism of colors) which also formed two columns concerned rather the human and he is represented under the features of an old man, classically symbolizing the experience and wisdom of the age.

Particularities of the Pope of Grimaud

He is dressed mostly in blue and red (symbolism of colours) colours of wisdom and spirit with a touch of action. This blade focuses on spiritual authority, wisdom and guidance.
The hand holding the cross is covered with a yellow glove (symbolism of colors) which means that the power is divine. The Pope has a beard and long hair like the Emperor, which puts him in a spiritual dimension, but the hair is also braided, which symbolizes the mastery of his spiritual power.

Get the Grimaud Tarot

The Pope is not always benevolent...

The Pope is generally understood as good or representing the divine connection. There is, however, an essential component to this card that should not be overlooked. Both the Pope and the Emperor are figures of authority. As a result, excesses can be committed. It must be understood that the Pope often acts according to tradition, rules and can also represent dogmatic law. That which it is not possible to break, otherwise one will find oneself excluded from society and societal tradition.

add a comment from The Pope on Tarot - Comprehensive Card Meanings