The Tarot Lovers is a card often difficult to understand. It shows the love presented in the title but with 3 characters in the scene, ... and an angel, which can lead to confusion. In fact, the Lover does not necessarily express the feeling of love but what can result from desire and choices. To know how to understand the Tarot card and get the most out of it, read the meaning of the Lover's card below.

Description of the Tarot Lovers' Blade

L'Amoureux of Tarot is card 6 of the Tarot. L'Amoureux is a card that is often appreciated because it reminds one of love. Love is one of the most asked questions and most Tarot consultations or the desire to learn the Tarot will be motivated by the desire to better understand one's love life or to find solutions. 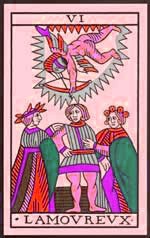 The Tarot Lover's card speaks of love, but in a slightly different sense. It can also speak of friendship relationships and not only of a couple. It can also be a card that speaks of a third person entering the couple.

In the Tarot Lover's card, we observe a main character we call the lover at the center of the card. In the center of a triangle formed by the angel and the two female characters.

Exploring Love Issues with the Tarot: Understanding How the Tarot Speaks of Love

The presentation of the main character

In this arcana of the Lovers, we find a young blond man facing a choice. The Lover stands upright which predisposes to action but not yet realized because of the position of his feet turned on each side of the card. Contrary to its name, The Lover does not express the notion of love (there are three characters and not a couple and therefore a choice).

He seems hesitant and not knowing which path to take. His legs are bare and therefore exposed and unprotected. His red, green, yellow and blue clothes (symbolism of colours) informs us about his human and influenceable nature as well as the diversity of the character.

His legs are bare (showing vulnerability but also sincerity in his gait) and the feet are directed towards the two women as a sign of indecision and hesitation. The woman on the right looks older and is wearing a hat. A sign of her social position, a respectable person but also one who probably has a husband and children. The woman on the right seems to be the same age as the lover.

She is not wearing a hat. The hair being a prerogative of seduction, it is possible that she desires love or is trying to seduce him.


The Tarot Lovers is the card of hesitation and doubt. Of the choice to be made and of the difficulty of this choice.

The Lover's card is shown upright:

The Tarot Lover's card is the card of choice and hesitation par excellence.

The Tarot de Marseille Lovers is the manifestation of an unstable, ambivalent situation that is not yet determined. The consultant must make an important choice which will be determining for his future.

The Double Meaning of the Tarot Lovers

The Tarot Lover's card at the right side is an arcana with a double meaning. It shows the duality of choice but also the possibilities of failure or success if the Lover makes no decision. The presence of the angel and the sun are capital. It shows the direction to take to reach happiness. The duality of choice is also that of knowing how to find balance. Thus the true path is that of the golden mean.

This card talks about emotional choices and emotional life. It also expresses emotions and how they are felt. The awareness of oneself in relation to the other and the choices that this implies.

To help you better understand the duration and scope of your tarot readings, consult the tutorial on how to evaluate time with the Tarot de Marseille.

If they are negative, we will have to be vigilant. The Lover is a card of waiting, of a relationship still in formation or of a desire for a relationship not yet realized.

To understand in how long can arrive such or such event or that it is the duration of your draw in front of the councils which will have brought you the Tarot is not always easy.

Summary of the Lover's card

The Tarot Lover's card in the right place will make you think before making a choice. This Tarot card will appeal to our free will, and our ability to choose. It will also speak about meeting (rather in love but not only) as well as desires. It is a very beautiful card also showing the physical and spiritual fertility (through the presence of the angel and the sun). Finally one will be able to say that it is a love card where emotions play an important role. The Lover's card can also make you think of the love of beauty and all that is aesthetic.

The Tarot Lover is shown reversed: 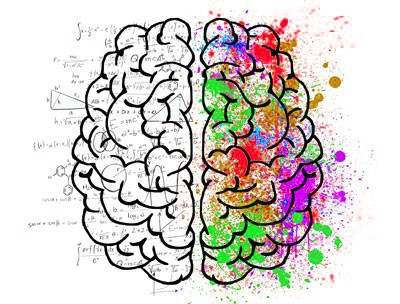 The choice becomes heartbreaking and the consultant makes the wrong choice. He gives in to the easy temptation. The whole is strewn with slanders, traps making the situation difficult to live and manage. It can also be a dangerous encounter, temptations that are difficult to resist, resentment towards one or more people, rigidity in choices, sterile hesitations, relationships from which love is excluded.

The lover has multiple meanings in a draw according to his associations with the other arcana but it often symbolizes the indecision and the difficulties of the consultant to take action. It is often difficult to ask the right questions to the tarot.

Summary and Synthesis of the Lover's Card :

It is a very complex card whose meaning is not always easy to grasp outside its primary meaning of choice. It can represent for the consultant difficult choices to make, but it can also symbolize love and competence in all forms of visual arts.

On the physical level, the Tarot Lover's card may speak of sexual desires, love or feelings in general, but the interpretation must be done with caution and must be confirmed by the neighboring cards.

The Lover asks us to choose and to make a commitment to that choice. That is to say to choose or not to choose but to position ourselves in relation to it. Moreover, the Lover, although it is a choice card, also shows that the decision cannot be made right away and that it is appropriate to wait.

You pull the cards thinking of one person in particular:

The message of The Lovers:

I invite you to make the right choice by listening to your heart and your intuition.

Characters (details on the intention of the women)

The blue hair in the tarot is always synonymous with sacredness and spirituality. His attitude towards the young man seems more sincere. His hands are both laid on him.

The path is hard for the love and the choice is difficult. He is in relation with these two women but in a different way. Indeed his left arm surrounds the young woman on the right (carnal relationship) while he only looks at the young woman on the left (spiritual and intellectual relationship). Many hypotheses have been made about the identity of these two women. They could be the mother and the fiancée, or they could be the path of virtue and the path of ease...

Particularity of the Lovers

The card is drawn on two planes: a lower plane where is the Lover and the two women and a higher plane where is an angel (plane of the celestial and thus independent of the will of the Love and that he does not control, announcing the events over which he has no control).

This arcane thus evokes that forces outside the consultant's will can manifest themselves and over which he has no power. The angel holding an arrow reminds us of Cupid (but his bow is not bandaged, so he has no possibility of action). He informs us that the exchange between the characters is rather sentimental.

add a comment of The Lovers - Tarot Card Interpretation and Meanings