Keywords attached to the House God of Tarot

The House God of Tarot reversed: refusal to question, fear of change, confinement...

Description of the cart of the House of God

The House of God Tarot card depicts a tower, square at its base, planted on a hilly land dotted with tufts of grass. A huge flame comes out of the roof.

The characters seem to fall to the ground or in any case, be expelled from the tower. The tower has black windows, and all of them are a series of balls, all of which are multisulting from this explosion.

The Tower itself seems to show some form of destruction. It recalls the Tower of Babylon with ambition and pride.

The tower explodes and pulls out anything that is too contained to make room for new elements. The flame at the top of the tower might make one think of the spark of truth that breaks through ignorance and darkness.

Here we have two characters just like in the previous card. They could be the same.

The card shows that they fall headfirst because they are totally turned upside down by the internal revelation. It is about awareness.

The card of The House of God is shown upright:

Card 16 of the Tarot of Marseille is heavy with meaning. It is one of the most difficult Tarot card to interpret in the deck.

It marks the end, the destruction, the irreparable, the point of no return but still in the tarot with the exit to a better situation.

We tend to want to remain locked in our comfortable cocoon of our beliefs and a-priori. Our beliefs, our routines... The card shocks us because it defeats everything that is comfortable but cramped for us.

The House of God of Tarot makes us aware that the comfort on which we build our lives has no solid foundation and often rests on false beliefs.

A card that upsets but for the right cause...

The House of God in a Tarot deck can be very upsetting to you. Its purpose is to shake up what you think at a given moment. Now is the time to understand in the apparent upheaval of your life, what you have not done correctly. How you let yourself be blinded by life and the situation.

The House of God is asking you to take matters into your own hands and face the truth. This is a time of questioning. It can also be a painful and difficult time, but it is also a time of openness.

All disasters are possible, the fall, the defeat, the most horrible suffering, anything can happen, but it is mostly about internal feelings.

The House of God of Tarot is there to shake your present foundations of security and comfort and force you to question yourself.

It's a question of reviewing your beliefs, your perception of the world, your behaviour and the attitude you have towards things and life.

You find yourself forced to divorce or face major economic problems. You may also encounter health problems or death or loss...

Read the Case Study - How to Transform Your Life with Tarot

It may also be a slow but methodical destruction of soul and body. Whatever he does the consultant is powerless and can only suffer what happens to him. Traps, grudges, hostilities, wars, unpleasant surprises. But that, only if he does nothing to change.

If the House of God appears in a Tarot deck, it would be wise to ask yourself what is falling apart in my life?

The point here is not to say what is obvious, but deep down, what is collapsing.

In spite of all the difficulties and the terrible revelations of the House of God of Tarot, what must be remembered is that after the destruction and the shaking, appears the reconstruction.

The House of God is the symbol of awakening, of awareness. It therefore speaks of freedom and liberation from the old patterns and chains of life. Through the House of God of the Tarot, you access the deep truth, the one that is not visible at first sight. Change is the key. This Tarot card is instantaneous and represents the need to change things immediately.

But as in all Tarot cards, you always have the choice to decide. Thus, it is up to you to decide whether you wish to continue to live as you are living today or to accept change. IF you choose change, then you have access to the Tarot Star card, the card of universal consciousness. You access the supreme truth.

For the House of God of Tarot, change is the key.

The House of God of Tarot represents in its construction, the structure, the skeleton that you have built. They are your protections and defenses against the world. The defenses that protect you but hide the truth from you.

To get out of the mould

At the same time, the House of God of Tarot may also speak of internal characteristics such as pride, or the illusion of the ego that makes you feel better or superior than others. The House God then aims to destroy this illusion and to place you in front of your truth without attachments and lies. It is then important to accept the changes and assimilate them in a positive way in order to be free.

Summary of the card of House of God

Challenging and needing to rethink the way we function, the beliefs and the foundations on which we have built our lives. It may also involve sudden and destabilizing events that will push us to review the comfort of our lives.

Everything can be changed and you can find a new situation of balance and peace as long as you question the foundations on which you have built your current patterns. These create harm to you and prevent you from blossoming, that is why the House of God shows you the way.

The card of the House of God is shown reversed: 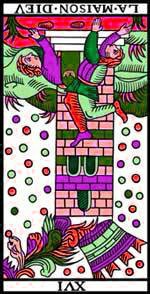 The card of the House of God upside down is much less drastic. Its teachings come in the form of a warning. There are risks of falling and dangers. She will speak here of destruction but in the sense that it is necessary to move on to another situation, to evolve.

In its reverse aspect, the House of God Tarot card indicates that you do not accept the change and that you postpone it. It is also possible that you close your eyes and refuse what is happening. However, it is important to do this work of acceptance in order to learn a major life lesson. 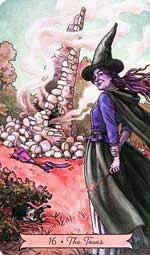 It is a painful but necessary period to move towards a better situation. When you have reached the lowest point, you can only rise again. Thus all the faults and sins will be punished, but this punishment will prove to be full of lessons that will allow you to forge a better future.

Think of a better future

Thus, the upside down House God will also be able to indicate that you have seen and understood that you have to change, but fear is more important. You are afraid of the pain that the destruction of your current beliefs will bring you and you remain in inaction and therefore in suffering.

Sudden changes in situations, events and unexpected surprises to be grasped before it is too late. The consultant becomes courageous, fearless, fearless, feels confident as if he is being helped by dark forces. The Devil always symbolizes recklessness.

The reversed card of the House of God will be able to bring out conflicts, ruptures, but will also be especially warnings in order to become aware of the modifications and changes to be made in your life. It will also be able to talk about the internal workings of the ego such as pride, hatred, greed... The House of God speaks of chaos, temporary defeat, ruin, disasters of all kinds but especially because you do not accept to see the need for transformation.

This card, by its warning message, allows us to protect ourselves from danger and the consequences of a bad choice. However, we must be wary of people we might meet who are devoid of charity and who exercise their power over others with tyranny and despotism.

The message of The House of God:

Accept the transformation and don't take what is set for truth...

A few more details about the House of God Tarot card...

The Tower of the House of God seems to represent the Tower of Babel built by the pride of men. It would represent the human will to reach the heavens out of ambition, pride and selfishness in order to be more powerful than God. The Tower is flesh-coloured, it is a human construction. It has 3 blue windows and no doors.

The image of the Tarot Grimaud

Two figures fall from the tower, one is crowned, the other is not. It is the fall. The man alone by his construction and his actions triggered this whole series of disasters. But the characters fall on the earth which has the colour of hope and is of divine essence: yellow.

So nothing is lost, and nothing is final. They fall upside down, as in the case of Hangman it is a sign of an imbalance, of a reversal of situation.

The situation is turned upside down, the characters suddenly see things differently, from another angle. Their vision is transformed. The fall can also be a promise of renewal. You have to destroy in order to start afresh. Everything superficial is attacked and disappears.

add a comment of The House of God - Tarot Card Meanings