The Tarot Moon card upright: depths of the unconscious, past, family

Description of the Tarot's Moon Blade

The Yin element and the dark, the cold, the shadow... The moon on the card radiates on the whole landscape by showing a faint glow giving rise to various interpretations (as through the prism of his unconscious).

The card is presented in 3 levels, the moon, the dogs with the towers and the puddle. The pond symbolizes the unconscious, and all that is hidden there.

The crab represents what bothers us or what we don't like to see and which resurfaces from the depths of our being. Dogs seem to bark at the moon representing yet another part of our personality or our unconscious .

The meanings of the Tarot de Marseille's Moon Card

The Moon card in this context highlights the whole dark and negative side of the unconscious. 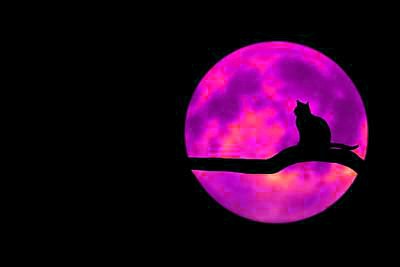 The Tarot's Moon Blade represents the shadow within each of us. This is the depths of the unconscious as described by Carl Jung.

The Moon represents the part of instinctive shadow in each one of us and that we often tend to repress or repress... We all have our shadowy side, but we are not aware of it. The Moon precisely invites us to see it, to look at it and to accept it in order to better understand our functioning and our life.

The Tarot Moon card essentially refers to the psychological aspect of the person. It is not an action card but a reflection card.

It will often represent all the fears, anxieties, apprehensions and sometimes even phobias that are within us and that prevent us from living and moving forward. It will represent the blockages, the bonds, the behaviors that suffocate us and that we do not want to see.

The reality with the Moon card is misleading or at least it appears differently from what it is. The ideas are erroneous, the consultant is subject to fanaticism, to prejudices.

To create a harmonious flow within you and feel the effects of inner peace, meditate with The Moon. The Tarot meditations will help you understand your unconscious and better connect with it. 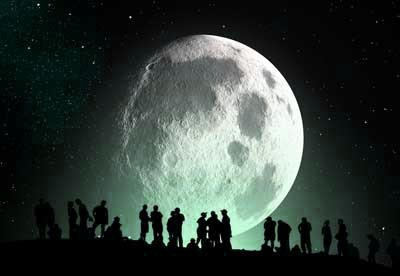 The Moon in the right place is a card of reflection on what is within us. It represents the illusion we have of ourselves and of situations. It will also show disappointments. We must be aware that what we take for truths or reality may not be what it really is.

One can be moved by dark and unconscious forces (especially if the environment of the other cards is negative). It is then possible that you are trying to see things through your prism without wanting to be aware of reality.

This Tarot moon card heralds the presence of unpalpable and devious dangers, or the idea that one has of them, which may not be reality. One must be doubly careful because everything is played in the shadows and in secret. Anxiety, depression, destructive manias, obsessions, inhibitions, all psychic and mental problems are revealed.

The Tarot Moon, a sign to find the way

The goal is to face all these trials with a spirit of sacrifice and self-sacrifice. Compromise, because one cannot oppose fate and bad luck. It sends the consultant back to his own past and to his inner self.

The Moon card at the right place in a Tarot deck may also show that you are at a crossroads. You have lost your way, and you have only your intuition to guide you. The Moon will be able to express here the inner dialogue, ruminations, assumptions. It will express everything that is blocking the inner workings of the person.

Summary of the Moon card 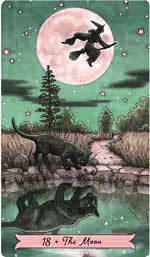 The Moon card can have very different meanings depending on the other cards. Indeed, this Tarot card can mean many things but it needs a complement to clarify its meaning.

Thus according to its neighbors, they will be able to make think of fanatical, lying attitudes (towards oneself and others). Under another aspect, it will be able to show the world of illusion, by the refusal to see or understand. For others, it will also represent mental disorders. If the Moon is associated with the Tarot Mat card, it could represent madness, depression, mental illness...

The Moon card will also be able to talk about slander, deception, slander and all that is associated with slander. Finally, under another aspect, the Moon will also represent the family and family roots.


Meaning The Moon of the Tarot is shown reversed: 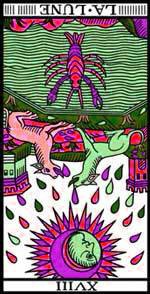 This card is less drastic reversed. It is the card of the unconscious and the dark side of things.

The upside down Moon card may indicate that you have experienced difficult situations, disappointments. It will then represent more of an awareness of a situation such as the understanding of illusion, anguish, or fears.

Emotions take over. You feel a great discomfort but you understand the mechanism that allows you to free yourself from the weight and the feeling.

You understand the nature of your anxieties and fears, which is a first step towards liberation.

This arcana is never totally positive even with beneficial neighboring cards. It always reveals the darkness of the depths and the occult forces. Secret and traumatic desires, a painful past, painful returns to childhood.

The reversed card of the Moon may express a deep inner misery, a lack of joy, confusion and a form of weariness with regard to life and what you want to do. 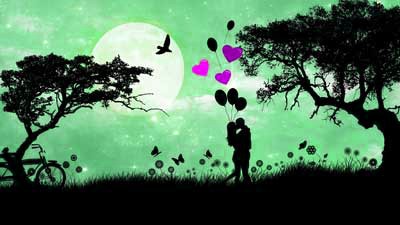 You may have the impression that you want things that cannot come true, that you have unattainable dreams, and that it is not possible to move. These are illusions of the mind that prevent you from moving and moving forward.

To get beyond this stage, you will need to regain confidence in yourself and believe in yourself and your abilities. This is also a tip from the card that invites you to take another look at yourself to get out of the state of lethargy in which you find yourself.

The Moon card of the upside down Tarot also highlights a hyper-emotivity, a great sensitivity, a deep intuition, uncontrolled emotions. You do not interpret situations or words correctly.

Summary of the Reversed Moon Card

The Moon card of the Reversed Tarot refers to the world of the imaginary, the unconscious. But it can also show particular behavior such as disbelief, whims, fantasies. It may also suggest a return to childhood in the sense that the family climate may have been oppressive and emotional or psychological ties cannot be severed.

It is a very murky card that often means trouble of conscience, scandals and slander. It is one of the most difficult cards to interpret and understand.

You pull the cards thinking of one person in particular:

The message from the moon:

Listen to your deepest intuition before you act.

Go further: the different planes of the moon

The moon in the foreground

At the top of the moon, is reflected on the pond in which there is a huge crab, an analogy with the zodiacal sign of cancer that devours everything in the water.

The crab's gait is reminiscent of the moon travelling in the opposite direction to the sun. It is immense and disproportionate to the rest of the image, just as the crab is disproportionate in the water, it devours everything, the past is omnipresent. The Moon is the symbol of inner life.

Therefore, there is no tangible action, it produces nothing, it remains in a state of reflection and thought.

The Moon is a highly symbolic star, it is associated with the colour blue, the colour of the feminine, of the imagination, of the spirit.

It is in profile and turned towards the left, towards the past, towards withdrawal and interiorization. Its rays are not direct, its action is soft, indirect.

The moon in the background

We see two dogs sitting face to face who seem to be barking at the moon. Behind them, there are two towers. This double duality is synonymous with division. Man multiplies and divides in suffering. The two dogs are flesh-coloured and thus embody the human.

They also seem to be the guardians of the cosmic order, probably a nod to mythology as well. The towers are human constructions, so if the animal embodies the world of emotions, intuition and instinct, the towers embody the world of intellect, work, (see on this subject the symbolism of the colour yellow).

The moon in the third plane

the third plane, which seems huge compared to the other two, is blue. This is the world of the unreal, the one that absorbs everything.

Finally, the Moon symbolizes the night, all that is dark, secret, underground, unknown and frightening. Thus man must manage to reorganize himself in order to become master of himself and not let himself be devoured by his imagination.